Congratulations are in order for Three Creeks Brewing in Sisters and Bend's own Deschutes and Worthy breweries for bringing home a gold medal and two silvers, respectively, at this year's version of the Beer Olympic Games, the Great American Beer Festival Competition.

In this era of cancel culture, where anything and anyone is in danger of being canceled (except for student loan debt), we are sadly on our second year of living in a world without the Great American Beer Festival, the craft beer industry's swankiest soiree that, pre-pandemic, was held annually in Denver. For most beer lovers, the main event is the festival atmosphere where over 800 breweries sampled their suds (in 1-ounce pours). Sample all the beers under that one roof and you just drank over 225 pints. But what has not been canceled is the GABF's competition, the grand poobah of all the myriad honors any brewery's beer can be awarded. The 2021 rendition took place earlier this month and Oregon collectively took home a comparatively staid 15 medals, with the three that returned to Central Oregon going to Three Creeks' Stonefly Session Ale, Deschutes' Dee Wright Imperial Brown, and Worthy's Strata IPA. 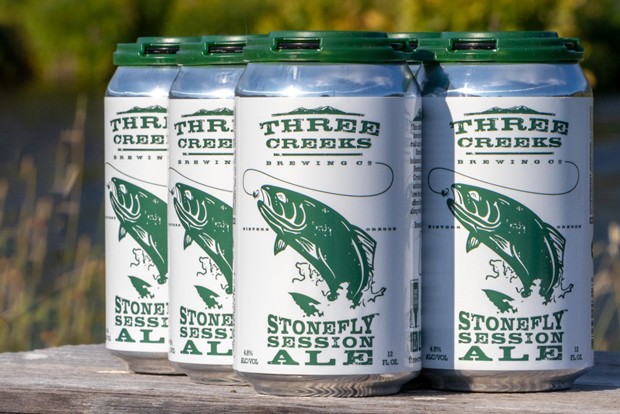 While this state and region typically haul back a handful more medals, note that there were a total of 9,680 beers submitted for judging from 2,192 breweries from all 50 states, meaning every year the competition gets more fierce.

Gold medalist Stonefly Session Ale topped the Session Beer category, which is less a style with strict guidelines and more a concept about championing lower-alcohol beers. The only real rule is that the beer needs to weigh in at or under 5% ABV, and this gem from Three Creeks clocks in at 4.8%. It's essentially a mini rye pale ale; a bit spicy, quite dry and offers a platform for vanguard Strata hops and old guard Crystal hops. Impressively, Stonefly has medaled twice with this beer before, earning back-to-back bronze in 2017 and '18, so leveling up to gold elevates its pedigree. Given its lower ABV (and, by extension, caloric value), this readily-available canned beer is great for autumn hikes.

Less available is silver-medalist Dee Wright Imperial Brown Ale from Deschutes, given that you'll only find it on draft at the Bend Public House. The word "imperial" essentially connotes the opposite of the word "session." Dee Wright (named for the observatory almost 40 miles away) took second place in the Other Strong Beer category, meaning the only real rule is that the beer needs to weigh in at or over 8% ABV. Unlike its milder U.K. cousin, Deschutes assistant brewmaster Robin Johnson describes this beer as "all the notes of an English brown ale, but dialed up to 11." That means more toastiness, more filbert flavor, and more of what the British beer writers call "morishness." Adds Johnson, "I'm extremely happy that it took silver at GABF. The beer turned out even better than I had originally planned."

It should be further noted that this marks Deschutes's 44th GABF medal! That makes them Oregon's winningest brewery (Pelican Brewing has garnered an impressive 41) since debuting at the eighth GABF competition in 1990, and their first hardware since 2014.

And finally, Worthy returns to GABF glory with Strata IPA, earning its second silver in the Australian-style pale ale category, after initially doing such in 2018. This is a beer category that distinguishes American pale ales and IPAs, marked by more bitter citrus and pine notes from domestic hop cultivars, from ones bred Down Under that boast more passion fruit or mango flavors. They often rely on Australian or New Zealand hops such as Nelson Sauvin or Galaxy. But Strata hops originated here in Oregon, and this varietal that has become an industry darling saw Worthy debut "the first year-round production beer exclusively using the hop," according to Worthy Brewmaster Dustin Kellner, thanks to their partnership with OSU's Hop Breeding Program.

Kellner says, "Strata IPA has been around almost five years and hasn't changed much...but the beer has gotten better as the hop has matured and the 2020 crop year was one of the best yet." He adds, "To have categories like Aussie Pale that specifically call out the prominence of tropical fruit notes really helps this beer find a home." Strata IPA is the best-selling beer at the eastside pub.

Sort of as a post script, the winners for Fresh Hop Beer won't be announced for another couple of weeks since it's the one style that can only be produced at this exact moment during hop harvest, so there's a chance for Three Creeks to repeat their gold medal win for Conelick'r Fresh Hop IPA, or possibly have another Central Oregon brewery top the podium.