Beth Brady originally opened her Asian-inspired food cart in downtown Bend in July 2020, but had to shut down soon after, when she was hit by a car while crossing the street. She opened Dinky Dau again in May, tucked behind Sports Vision Bend near the corner of Oregon Avenue and Irving Avenue. For $8, the bahn mi sandwiches come with your choice of a number of meat or non-meat options, including lemongrass pork or tempeh, ginger chicken, umami meatballs, jackfruit or a wok-fried omelet. I opted for the tempeh and was not disappointed. Tempeh is great at absorbing other flavors, which on this sandwich included kewpie mayo, cilantro, cucumber, daikon, carrot pickle and jalapeno.


Also on the menu is the Dinky Special—your choice of protein and two sides with a choice of jasmine or brown rice. Sides include kimchi; jicama, pineapple and jalapeño slaw; avocado and cucumber salad; sesame edamame, soy eggs, green papaya salad, Spam, and pork and vegan pate.

Back in May, Worthy Brewing's downtown Bend location switched things up, moving from its "Taps and Tacos" theme to burgers and sandwiches. Downtown Bend's tourists often walked in thinking the Brooks Alley location was the same as the flagship pub on the east side—so the company decided to end the confusion and make the menu more like the pub, said Monica Kline, Worthy's director of food and beverage, who developed Worthy Beers & Burgers' new menu. 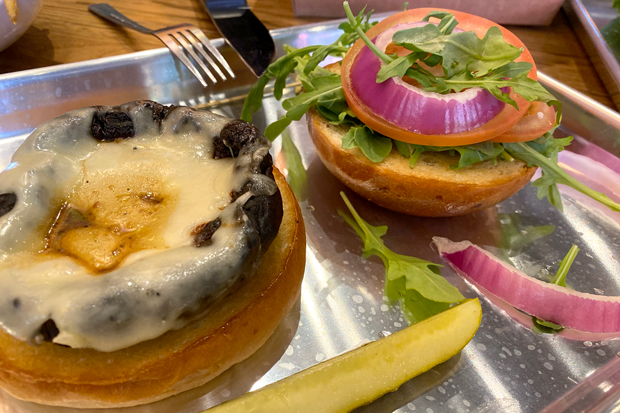 "Our hope with this is to shift the focus from margaritas and tacos to the beer," Kline told the Source.

All the burgers come made on a Sparrow Bakery brioche bun and a suggestion for which Worthy beer pairs with it best. Originally from the Southwest, Kline brought her home-style flavors to the Green Chile Burger, topped with green chiles and pepper jack and crispy tortilla strips—an addition that made this my favorite burger on the menu.

Vegetarians also have several options to choose from, including the Beyond the Galaxy burger made with a Beyond veggie patty and topped with hop aioli and dill relish, along with the usual accompaniments of lettuce, tomato and red onion. The Magic Mushroom, meanwhile, is a marinated portobello topped with swiss cheese, arugula, red onion and tomato—a delightful plant-based option for a downtown Bend lunch. Those looking for an affordable lunch on the go can try The Quickie, an $8 quarter-pounder with all the classic toppings. Also try the Tavern Fries, a loaded plate of fries with parmesan, bacon and Mama Lil Pepper Aioli.

A line was already formed when I showed up at opening time at Unkle Kate's Bait Shoppe—not exactly in downtown Bend, but close enough for a downtown office worker to buzz through for a late lunch. The place is currently opening at 2 pm and tends to sell out of its signature item, the lobster rolls featuring Maine lobster, lightly dressed with a mayo and lemon sauce. Owner Kate Brennan, originally from New Hampshire, spent years cooking on privately owned yachts and as a private chef, and now brings that experience to the cart. 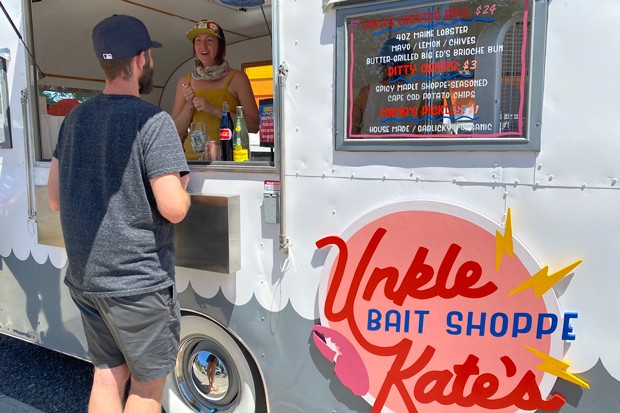 Having grown up on the East Coast, Brennan wanted to bring the freshest-possible lobster to the cart. The lobster comes from Luke's Lobster, a small cooperative in Maine that delivers the product nitro-frozen. With a slow defrost, the lobster tastes as close to fresh as possible.

"I was really skeptical, honestly,"Brennan told the Source. "Growing up where I did and only having fresh—but then they sent me some to try and I would not be able to tell the difference."

The rolls are not cheap; at $24, it's among the pricier lunch options out there for food cart food in Bend. But for those seeking that fresh Maine lobster-roll experience, this is it. The Big Ed's rolls are buttery and flaky and almost as noteworthy as the lobster itself—except it's lobster... so does it really have a rival of any food type? 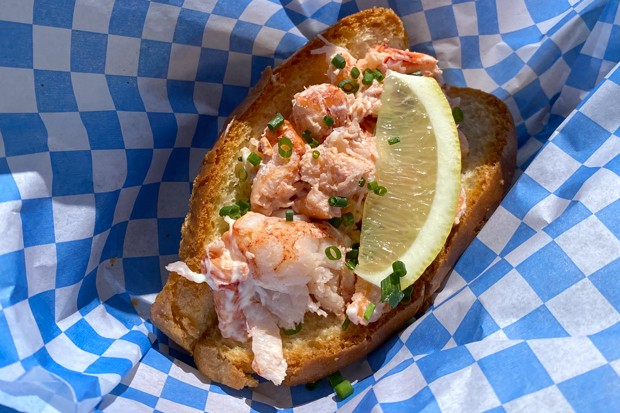 For now, Brennan plans to have the cart open for the warmer months, and is exploring the possibility of setting up a "chowder club" for the colder weather.