The Grandview, Darlene and Swamp Wells Trail Fires have burned thousands of acres during the early fire season


The fire 10 miles north of Sisters torched 6,032 acres, just under 10 square miles, since it was first reported on July 11. The Grandview Fire fed on timber, juniper sage and grass and grew with the help of high heat, low humidity and active winds. 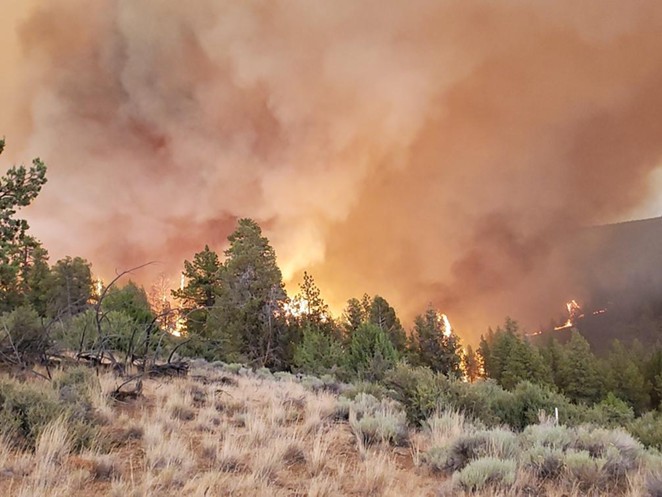 It threatened 421 homes, but none were reportedly burned at the time this article was published. Dangerous areas were given notice to evacuate, but on July 19 the Deschutes and Jefferson County Sheriff’s offices announced an end to all evacuation notices around the Grandview Fire.

“This decision was made after consultation with fire managers and cooperating agencies. We will continue to work with fire managers to ensure public safety and prevent conflicts between citizens and fire operations,” a joint press release from both sheriffs’ offices said.
Firefighters aggressively acted against the fire, and by the morning after it ignited containment lines had been drawn around the majority. As of July 19, crews were “pushing mop,” surveying ground temperatures to extinguish any root systems that remained dangerously hot. In the coming days the fire teams’ goal is to remove all heat sources 300 feet inside the fires edge.

The fire was 72% contained on Tuesday and it is expected to be fully contained by Friday. The cause is under investigation.

By Saturday the Level 3 evacuation notice (Go Now) was reduced to a Level 2 (Get Set), but not after the fire had torched at least two homes, 11 structures and a number of vehicles. Fire crews were successful in containing the fire over the weekend and by Tuesday it was reported at 90% contained.

No additional spread is expected and firefighters are working to further strengthen containment lines and mop up any potentially dangerous heat emanating from the ground.


The Swamp Wells Trail Fire broke out on Sunday evening about 9 miles south of Bend on Deschutes National Forest land, engulfing about 50 acres by the end of the day. Firefighters responded quickly with air tankers, helicopters, bulldozers and hand crews worked throughout Sunday night to quickly build preliminary containment lines.

No structures were threatened by the blaze, but a section of China Hat Road was briefly closed and people were asked to stay away from the popular recreational area. The fire was estimated to be 64 acres on Tuesday and 30% contained.

“Crews will continue to hold and secure lines today with assistance from heavy helicopters dropping water on hot spots. Air tankers are also available in Redmond if fire behavior increases,” a press release from the U.S. Forest Service said. A Red Flag Warning was issued for Deschutes National Forest at 1 pm on Monday and will expire at 10 pm Tuesday.