Through the Roof | The Source Weekly - Bend, Oregon

If you've tried to buy building materials lately, you might have encountered unwelcome surprises. What's driving price hikes and back orders for construction supplies in Central Oregon?

Shuffling a pallet of tile around for a kitchen remodel, Bend Craftsmen Company Owner Hank Hill remarks on the state of the industry. Most quality builders in the region are booking six months out, at least, and that's not to mention the costs of the materials those builders will use. Both issues can be tracked at least in part to COVID-19, international tariffs and a summer of wildfires—all which mean building new homes is only getting more expensive.

"Times are the busiest a lot of us have ever seen. Material prices have been fluctuating a lot and some of my preferred vendors, especially for appliances and tile, have seen significant back orders and delays," Hill said. 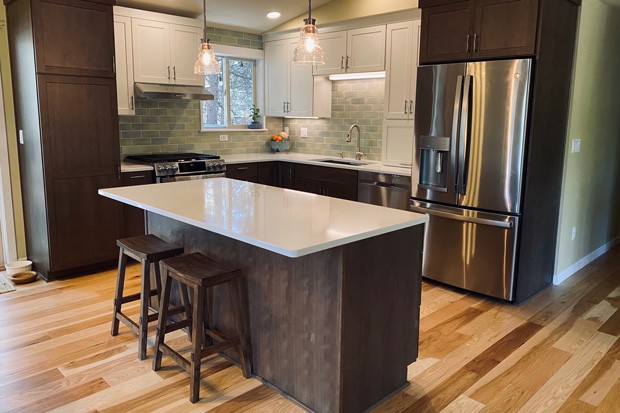 Damon Runberg, Regional economist for Oregon's Employment Department, supports Hill's observations with hard numbers. In late August, during a Central Oregon Builders Association presentation around COVID-19's impacts on the industry, Runberg noted that the only Central Oregon sector to see gains is construction, growing at a rate of 2.8% in 2020.

Evan Olsen, lumber salesman at Parr Lumber, said a backlog for lumber supplies started a few months after COVID regulations went into place. Mills were shut down in both Oregon and Washington. Washington's construction work also ceased, while Oregon's was deemed essential and continued. This ate up supplies which were on site or on sales floors. When the mills in both states, and construction in Washington came back online, supplies were gone.

"Mid-summer," Olsen explains, "we were two months back ordered for any new material, and sheet goods were triple the cost of pre-COVID prices." In particular, stud material and composite decking, both in high demand pre-COVID, were difficult to obtain, though have now rebounded somewhat.

Construction supplies are still in high demand even in bigger cities closer to shipping routes.

Aaron Brent-Fulps, owner of ABF Construction, reports during a visit to Home Depot in North Portland in early October, plywood that normally cost $16 a sheet was selling for $46.

Olsen of Parr Lumber said cedar is the hardest to secure—an issue traced to massive mill closures in Canada, and trade tariffs.

"Softwood lumber import tariffs of around 21% were levied onto Canada last year. Those tariffs are restructuring the entire lumber global supply chain, the National Association of Home Builders told MarketWatch. That then incentivizes U.S. buyers to import from overseas rather than ship lumber across the Canadian border," commented Robert Dalheim in a September article in Woodworking Network, an online resource.

Ryan Jennings, operations director for Redmond-based Hayden Homes said during the COBA presentation that there's been an 80% uptick in costs since April. At that time, 2x4s or narrow lumber purchased in bulk cost $300 per 1,000 square feet. As of late August, that rocketed to $835 per 1,000 square feet. Jennings notes this hike adds thousands of dollars to the price tags of new builds and exacerbates the ongoing housing crisis.

This translates to an increase of about $16,000 for the typical new single-family home and raises the cost of a typical apartment by $6,000, estimated an October article in "Builder" magazine. Prices for homes in Central Oregon have already skyrocketed during the pandemic, setting multiple records for median prices.

Jennings said in March, Oregon mills laid off around 30% of staff. As the economy got moving again, people were unable to return to the mills or weren't rehired. This, on top of distancing regulations which affected the number of people on any given work shift, combined for multiple wrenches in production. As a result, mills are no longer selling to smaller companies or wholesalers directly, he said. Meanwhile, it's been challenging to find larger appliances at local suppliers—further straining builders' budgets and timelines.

Olsen is anticipating another peak in lumber demand, with the looming rollout of new Occupational Health and Safety Administration guidelines on Nov. 1, and the toll wrought from rebuilding infrastructure damaged or destroyed during Oregon's summer fires.

In a high-demand building climate such as the one in Central Oregon, Karna Gustafson, vice president of government affairs and legal counsel for COBA, encourages consumers to check that their contractor has a Construction Contractors Board license. "Especially post this summer's wildfires, there is serious concern that fly-by-night contractors will have ample opportunity to take advantage," she said.


Hill, the builder, recommends that people looking to work with a builder establish a "cost-plus" format, or to include contingencies in contracts with contractors in order to cover unexpected extra costs. "If a contractor prepares a proposal now, but the project starts in six to 12 months, it can be wise for both parties to have another assessment of pricing and cost prior to construction commencing to re-evaluate."

A native Oregonian, K.M. Collins is a geologist-gone-writer. Covering everything outdoors and a spectrum of journalism, she's a jack of all whitewater sports and her favorite beat is anything river related. Don't blow her cover as a freshwater mermaid amongst humans.
Read More about K.M. Collins