TikTok of the Town

Through online duets, a local teen musician has gotten exposure on the "Today" show, and with other well-known musicians

TikTok, a recently controversial and much discussed video-sharing app, was first developed by Beijing-based servicing company ByteDance in 2012. The app gained rampant popularity during the global coronavirus pandemic, garnering over 800 active million users in 155 different countries. Now TikTok serves as a platform for everyone from gifted short filmmakers and sketch comedians to middle-aged women who like to dress their miniature pigs up in blonde wigs and lipstick. 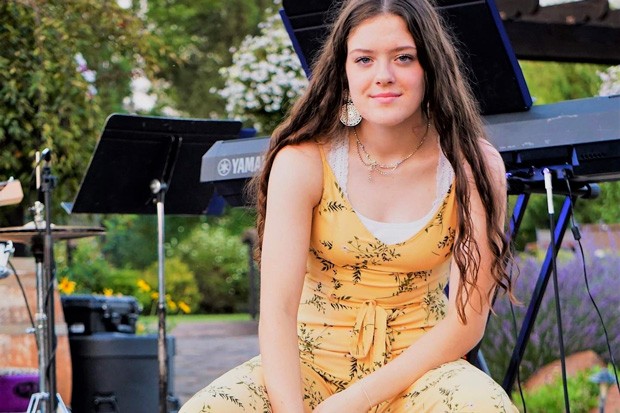 On Aug. 6, President Trump issued an executive order to ban two widely used Chinese-developed apps, TikTok and WeChat, if they were not immediately sold by their parent companies. For over a year, TikTok-inspired rumors have been circulating; is the app actually handing over personal data to the Communist Party of China? Is TikTok being banned or bought up by Microsoft or Twitter? And are we justified in so harshly politicizing an app that serves as a viable platform for budding talent?

As of now, the future of TikTok remains unclear. What is clear, however, is that while the app does still exist, many undiscovered talents are utilizing the video-sharing technology for the greater good.

Bend-local musician Olivia Knox is one of those who've experienced a sudden and impactful surge of TikTok-related success.

"I've been performing, singing and songwriting since I was 8 years old," said the 17-year old in an interview with the Source. "I wrote my first song when I was 8. I grew up in a musical household; my dad is a music professor at COCC. He brought music into our lives, my siblings and I. Recently I got a band together and we've been playing around town. Of course, it's gotten more difficult with COVID, but I've been blessed with many opportunities to perform in Bend."

At the end of August, Knox "dueted" a video with two-time Grammy Award nominee and American singer-songwriter Charlie Puth; a video that now has over 2.5 million views. In the original video, Puth created a beat and asked TikTokkers to write lyrics and sing along, or "duet."

“It’s also so easy to interact with these major celebrities. Having Charlie Puth comment on my video was amazing. It’s so crazy that he knows my face and knows my name.”—Olivia Knox tweet this

Knox joined the fun, but explained that gravitating toward TikTok was out of the norm for her non-tech-savvy self. "I don't know a lot about social media, but TikTok was a lot of fun," she said. "At first I was just making funny videos. Then I posted the Charlie Puth video and that got crazy. Now I have this amazing platform that I can perform on and grow on, and I have all of these followers that encourage me to pursue my musical goals. The support has been incredible and encouraging." One of the most noteworthy comments, Knox noted, was from Puth himself.

"There are so many positives when it comes to this platform," said Knox. "I'm able to get my music out there on a super-supportive platform. People are so nice; I don't even know these people and I just want to hug every one of them. It's very uplifting. It's also so easy to interact with these major celebrities. Having Charlie Puth comment on my video was amazing. It's so crazy that he knows my face and knows my name. I recently 'dueted' a video with Andy Grammer, and it got me on the "Today" Show a couple of days ago. It's been a very good thing so far."

Grammer, another multi-platinum selling recording artist, featured a clip of Knox's duet while he was appearing as a guest on the nationally broadcast television show. Knox is preparing to continue making videos to keep her rapidly growing online fan base engaged.

"The hard part is coming up with new videos every day, but doing so is helping push me towards my goals in my music career," she concluded. "I have a lot of original music that I'm excited to showcase, too. Right now my parents are helping me with a studio setup; I'll be getting a high-quality microphone and some other equipment to help with the sound. Right now I'm just singing into an earbud mic."