'Tis the season, with snow largely melted from city streets, when drivers begin to bemoan one consequence of a big winter storm: Potholes. While it can be a jarring experience to hit one unawares, we advise those wanting to complain to walk just a few minutes in another's shoes. Drivers may encounter that occasional annoying pothole, but pedestrians, cyclists and those in wheelchairs continue to face even uglier onslaughts. Walk or bike a few blocks in your own neighborhood today and you'll understand what we're talking about. 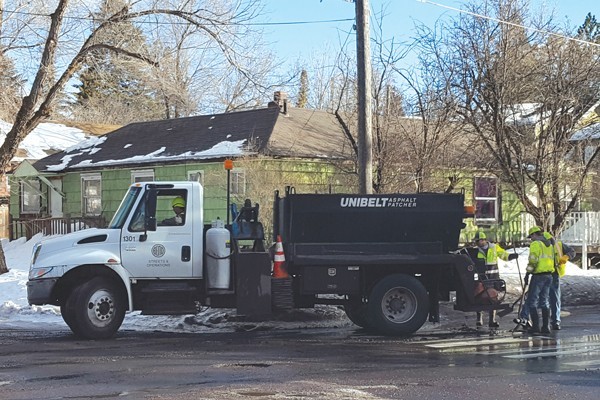 A few days ago, we witnessed how difficult it continues to be for non-drivers out there, when we saw a middle school-age student trudging down the street along the top of a 4-foot bank of snow, on a busy arterial street, fairly well risking her life in order to get home after the school day. Unlike many Bend streets, the street on which she trudged actually did have sidewalks—only, no one had bothered to clean them off. The City of Bend has the authority to issue tickets for such an infraction, but didn't issue any after this storm, city officials told us.

Meanwhile, the cyclists who dare to bike around town right now still need goggles that block out dust, as cars speed by and kick up the cinders still left in the road—not to mention the piles of snow and debris still left in the bike lanes intended to give cyclists a safe place to ride.

Those in wheelchairs, meanwhile, may still not have access to the bus stops nearest their homes—never mind wheeling down any sidewalks available.

A host of issues are at hand here. One, in the wake of the winter storm, is property owners' apparent disregard for City rules stating that property owners in commercial areas need to clear sidewalks within six hours of a storm. In other zones, it's within one day. Issuing a few tickets to property owners on some of the busiest streets—such as the businesses along Greenwood Avenue or Third Street, for example—would likely get those business owners to prioritize sidewalk clearing next time.

Another way to address this is to call out the good actors. We commend Deschutes County's Bicycle and Pedestrian Advisory Committee here, which announced its Safe Sidewalk Awards this week. Locals can nominate businesses and individuals making an extra effort to keep sidewalks safe. The due date for nominations is April 1. Get more info at deschutes.org/BPAC.

Safe sidewalks are one thing—but then there's the issue of navigating streets where sidewalks don't exist. While the City of Bend requires them for new construction, homes in older neighborhoods are only required to install them when a homeowner applies for a permit that involves "dramatic improvements" to the home, typically consisting of additions that add 50 percent or more to the existing home. Some have argued that this policy only creates "sidewalks to nowhere," and that the policy should be eliminated, or the funds homeowners pay be directed into a collective sidewalk fund that prioritizes certain streets. We agree that sidewalks to nowhere are not ideal—but having an occasional sidewalk still cuts down on pedestrian-vehicle encounters. Further, instead of rolling back the policy, the triggering events should be less dramatic. Perhaps anytime a homeowner does any type of renovation?

This is as much an equity issue as it is a safety issue. A student shouldn't have to live in a newer neighborhood in order to walk home safely. All Bend neighborhoods should have sidewalks allowing safe passage—and requiring them only when a home gets dramatic improvements isn't going to get us there fast enough. We don't want to see a pedestrian die to make this point hit home.

Given the fact that some property owners don't even prioritize clearing existing sidewalks, it's clear Bendites have a long way to go to truly prioritize pedestrian safety—but as evidenced by the County's Safe Sidewalks awards, there are multiple ways to encourage locals to do so.