A new date, concert pods and virtual classes ahead for the popular fest

This week, Sisters Folk Festival announced that the festival will move the date of the popular fall gathering into October, in hopes of avoiding wildfire/smoke season. This year the festival will take place Oct. 1-3. That is, of course, if it's held at all. Many popular and larger festivals like Coachella and Stagecoach, and Glastonbury in Europe have already announced cancellations this year. The advantage that SFF has is that it's later in the year when we might see a potential decline in the severity of COVID-19.

In place of last year's festival, SFF planned to hold a weekend of socially-distanced outdoor shows (part of their Close To Home series) over the usual September weekend, but had to cancel last minute due to the wildfires. So not only are concert promoters planning with an unknown pandemic future, but in Central Oregon they're also thinking about the environment and weather. 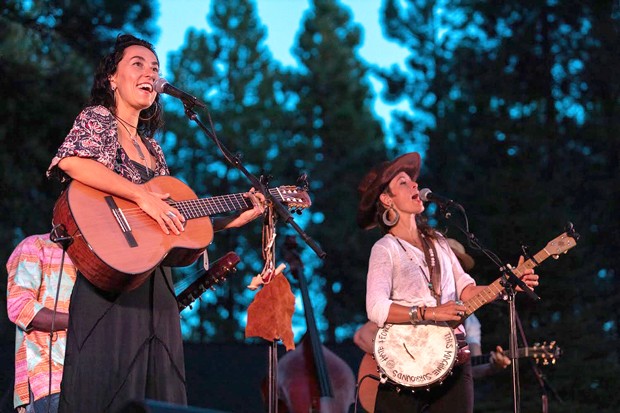 "It was chilling to think that, had the Sisters Folk Festival not been postponed due to the pandemic, we would have been looking at our second festival cancellation due to wildfire smoke in four years. It was clear to the board and staff that difficult decisions had to be made for the long-term survival of the festival," said SFF executive director Crista Munro.

Before 2020's cancellation, most will remember the festival being canceled in 2017. Creative Director Brad Tisdel recalls moving the Song Academy in 2003 and 2006 due to smoke, and vividly remembers fires during the 2012 festival.

"In 2012, the Pole Creek Fire erupted on Sunday morning of the festival and over our nine stages we made announcements that the town was OK, but the fire grew to be one of the worst in the area," says Tisdel. " I remember going out to the Sunday morning community show and seeing the fire erupt just outside of town, and then being at the Depot Cafe watching Gregory Alan Isakov perform with a massive plume of smoke rising behind the building to the west."

This year Munro says SFF also plans to host four weekends of shows outside at Sisters Art Works, just like the Close To Home series last year. This means socially-distanced seating pods and two times per evening for shows (Friday and Saturday), with the same acts playing both times the same night. The following night would be new acts.

"That allows for maximum efficiency in producing shows for a relatively small number of people, compared to what we're used to hosting. It's important to our staff and board that we continue to offer programming in whatever ways we can until things return to a more normal state; seeing the enjoyment on the faces in the crowd, and the huge smiles on the artists on stage makes it worth the effort," Munro told the Source.

Related Many Arms: Sisters Folk Festival makes organizational changes, aiming to offer more to a community it already serves in many ways

Many Arms
Sisters Folk Festival makes organizational changes, aiming to offer more to a community it already serves in many ways
By Chris Miller
Local News

Other SFF programming planned so far this year includes a slate of virtual workshops and weekend workshops over the next few weeks. The Americana Song Academy for Youth will most likely be virtual this year and is set for April 23-25, Munro said. She hopes to be able to return to in-person, small-size classes, workshops and camps in early summer when the weather is warmer and activities can be held outdoors. But as she notes, it's still too soon to make that call.

"We don't know what OHA [Oregon Health Authority] will be requiring yet, but we are operating under the assumption that guidelines will be similar to last summer, so we will sell seating pods as opposed to individual tickets, require proper face mask usage of all attendees and have rigorous sanitation measures in place for those concerts," says Munro. "We might end up doing five to six weekends of these concerts if it looks like we won't be able to have a 'normal' festival in 2021. Right now everything at SFF is based on scenario planning and staying ready to change gears once we have the information needed to make final decisions."

Related Summer Events? Nope.: But are we planting the seeds for a festival-filled fall? We checked in with event organizers to find out.

Summer Events? Nope.
But are we planting the seeds for a festival-filled fall? We checked in with event organizers to find out.
By The Source Staff
Local News