To Scan or Not to Scan: Local Restaurants and QR Codes | Chow | Bend | The Source Weekly - Bend, Oregon

To Scan or Not to Scan: Local Restaurants and QR Codes

QR Codes rise in popularity thanks to pandemic, but not everyone is on board

Once viewed as a marketing gimmick, QR codes are now becoming widely adopted and accepted thanks to the coronavirus pandemic. In larger cities throughout the country, many restaurants have shifted to digital menus, using QR codes for menu viewing and sometimes even ordering. Rather than physical menus, eateries can have diners scan a QR code to see online menus.

But let's back up a minute. QR codes, or quick response codes, are those small black-and-white squares that can be scanned with a phone to pull up a website. They were invented back in the 90s as a way to track vehicles during production and to scan components quickly. It used to be that you had to have a special app for scanning the codes, but thanks to operating system updates a few years ago, smartphone users can now scan the codes using a phone camera and nothing more. Just hover over the code, hit the shutter button and click on the link that pops up! 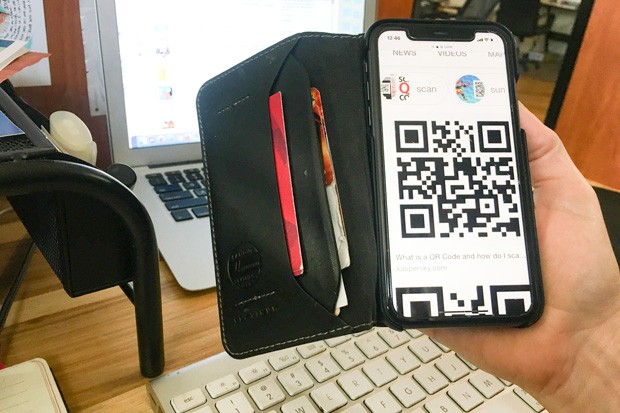 Restaurants in bigger cities across the U.S. are embracing the socially distant, low-touch service provided by QR codes. Using the codes eliminates the need for disposable menus, saves printing costs, aids restaurants operating with less staff and is waste-free. Digital menus can also be liberating for a chef who doesn't have to hesitate about introducing a new dish that requires a menu overhaul or doesn't have to worry about disappointing customers when a dish runs out.

What about Central Oregon restaurants and diners—are they making the digital switch? A call around to several establishments just prior to the most recent, mandated shutdown showed a mixed bag.

Drake in downtown Bend and Washington in Northwest Crossing (both locally owned by Ted Swigert) have switched to QR codes.

10 Barrel Brewing on Bend's west side is also using the codes. Pub Manager Bostyn Adams is a fan of the codes and says, "Guests seem to like using the QR code, with the only downside being the older generation that doesn't have a smartphone—but we give out single-use menus for those situations."

A couple of other longtime Bend favorites, 900 Wall and McKay Cottage, are manually disinfecting menus between uses. 900 Wall offered a QR code option earlier in the year, but a high percentage of their customers weren't interested in using it so they decided to drop it, according to Dining Room Manager Melanie Lamb.

“Guests seem to like using the QR code, with the only downside being the older generation that doesn’t have a smartphone—but we give out single-use menus for those situations.”—Bostyn Adams tweet this

On the other side of town, Worthy Brewing was back to its regular menus after using QR codes throughout the summer (they've shut down food service during this current shutdown, however). Assistant Manager Jeff Hoverson said the brewery is adapting to winter with the installation of plexiglass at the bar and reverting back to their full-service menus citing that their older clientele loves the socialization that comes with sitting and chatting at the bar.

At Rockin' Dave's Bistro & Backstage Lounge, owner Dave Flier is excited about a new online ordering system that he's signed up for that will provide QR codes. "All of our menus are also online as usual," he said.

With the uncertainty brought about by the resurgence of COVID-19 cases across the country and in Oregon/Central Oregon in recent weeks, restaurants are in a precarious position overall, some closed completely, others able to offer carryout and limited outdoor seating. With a stronger emphasis than ever on safety, predictors claim that the codes are here to stay. While the days of lingering over a menu may not be gone for good, for now, choosing a meal from a pop-up menu on a phone may sometimes be the option your favorite local dining establishment offers to keep diners and staff as safe as possible.