Too Hot To Handle

Oregon's fire season is starting earlier than it has in recorded history. How are agencies preparing?

With the entire state in some form of drought, Oregon's fire season is starting earlier than it has in recorded history. The season could be as devastating as last year's wildfires that swept over 1 million acres and destroyed thousands of homes, officials say.

The potential for disaster has spurred public officials across the state to start outreach early, promoting fire safety to Oregonians. 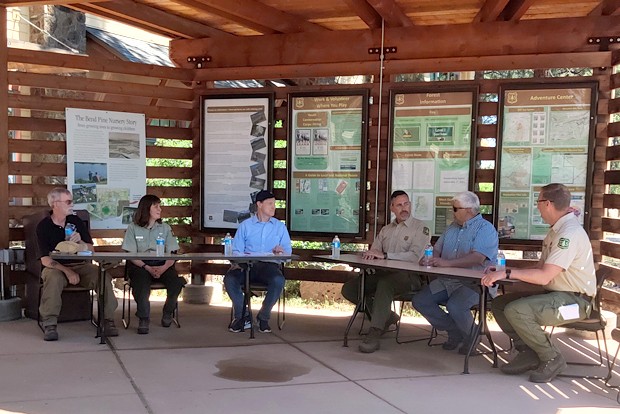 "Everywhere you go the message is that the days ahead look like scorching temperatures bumping up against a cold reality," Sen. Ron Wyden said during a briefing with firefighters in Bend on June 3. "These are not your grandfathers' fires. Modern fires are bigger," he said.

In a briefing from the governor's office, Oregon Fire Marshall Mariana Ruiz-Temple agreed with that assessment, saying fires in the last 10 to 20 years have lasted longer and been more complex.

"I think the biggest thing that we are looking at is really transitioning from the concept of a seasonal fire season and more of a fire year," Ruiz-Temple said.

With the high risk for fires, officials are advocating for safe fire use and promoting what people should do if they spot a fire.

"I would say human-caused fires has definitely been the problem so far this year, and in general it's at least 50% of our fire load here in Central Oregon on a normal year," said Kevin Stock, fire and aviation staff officer for the Central Oregon Fire Management Service.

COFMS produced videos on safe fire use and has promoted them on its website and social media. The agency is also trying to make the process for reporting a fire clear for Oregonians.

"If it's a fire that's doing something, a fire that's obviously a problem, it's moving, that's a 911 call," Stock said. "If you see someone who's having a campfire and it looks inappropriate, you can look up your local dispatch center or you can call the non-emergency number for your local sheriff and they will get that message to an appropriate agency."

Meanwhile the Oregon Public Utility Commission has established rules for public safety power shutoffs to reduce the risk of severed power lines starting a fire during intense weather. The shutoff is the last resort, but could occur if winds are strong enough to dislodge branches and trees.

"With the earliest official opening to Oregon's wildfire season in 40 years, the establishment of these rules was extremely important and timely," said OPUC Commissioner Letha Tawney in a press release. "They are designed to help keep Oregonians safe by establishing criteria on how the utilities communicate and coordinate during a PSPS, and particularly how they issue notifications before, during, and after a potential PSPS in order to provide the PUC, public safety partners and the general public useful and timely information."

Related Dam Drought: The Deschutes Basin Habitat Conservation Plan was approved in December with the goal of increasing instream flows in the river. Then another drought year happened.

Dam Drought
The Deschutes Basin Habitat Conservation Plan was approved in December with the goal of increasing instream flows in the river. Then another drought year happened.
By Jack Harvel
Local News