What do a retired general who believes in QAnon, a self-proclaimed prophet and a convicted felon who served as an advisor to Donald Trump's 2016 campaign have in common? None will be in Redmond on April 1 and 2, as previously planned.

The Reawaken America Tour booked two days in early April at the Deschutes County Fairgrounds and Expo Center featuring over 40 speakers from the right-wing media sphere, including former Trump employees Roger Stone and Michael Flynn. Stone, a campaign advisor to Trump in 2015, and Flynn, a national security advisor in the Trump White House, both were convicted on felony charges during Robert Mueller's investigation into alleged interference in the 2020 election and pardoned by the former president. 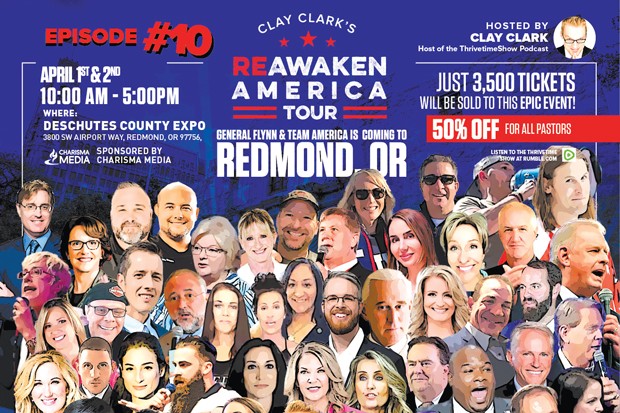 The event moved to the River Church Salem after the tour was asked to sign a contract addendum agreeing to follow mask mandates. The host of the tour, Clay Clark, said the decision to move the event was due to a preference to perform in churches, but a ticket salesperson for the event told the Source that the tour was moving to avoid mask mandates. The River Church pastor Lew Wooten has been critical of mask and vaccine mandates, and in September 2021 helped organize a statewide work walkout in protest of them.

Emails obtained by the Source revealed Troy Smith, a planner for the event, claimed he'd been assured by Deschutes County's two Republican commissioners that mask-mandates wouldn't be enforced, and that the Sheriff's Office would deal with potential disruptions. Commissioner Tony DeBone said he spoke with event organizers but never gave any assurances mandates could be skirted, which Commissioner Patti Adair echoed in a text message to The Bulletin.

The tickets cost $250, but offered discounts to anyone who asked under "scholarship" pricing. Clark said the event will not distribute refunds or transfers, which ticket salespeople again contradicted stating they could be transferred to any events that haven't sold out. Clark defended the no refunds, no transfer policy to KTVZ, "Because I'm in charge. I'm a capitalist," but added he'd offer refunds to people who didn't understand the policy.