A recap of the Source's top stories, ranked by views on Bendsource.com 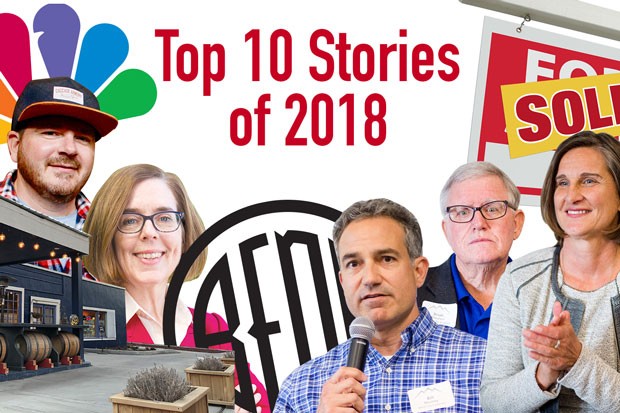 Under Armour sent a cease and desist order to Bend-based Cascade Armory Oct. 24, claiming Cascade Armory is creating brand confusion and that Under Armour is suffering from it. Short said he and his business partner/wife have vowed to fight the clothing giant. They've hired a film crew from San Diego to make a documentary on "how bad of a company Under Armour is," Short says, and have a game plan for a social media push.

"We're going to ride it out and hold our ground," Short told the Source.

Short said his attorney fees have run about $4,000 per month, and that's before any real legal battles have started. He said trademark court will cost about $50,000. However, Short said the community support has been great and he's even getting emails and orders from people in Europe—all because of the Source story, he said.

Update: Alex Short told the Source on Dec. 19 that Under Armour applied for another extension that runs out on Jan. 6.

No. 2 Dateline NBC reports on murder of Kaylee Sawyer 4/27

Update: After Kaylee Sawyer was murdered by former Central Oregon Community College safety officer Edwin Lara two years ago, her family is trying to change Oregon law. And the legislation has been named "Kaylee's Law."

If passed, it would take steps to prevent any confusion between campus safety officers and police officers.

According to a story on KTVZ, advocates of Kaylee's Law want campus safety officers to have less power. That would include: elimination of stop-and-frisk abilities, elimination of blue and red lights on campus safety vehicles, different uniforms from those of Oregon police departments and a requirement to report incidents to the Bend Police Department.

Update: After the final votes were tallied, Sally Russell will be sworn in as Bend's first elected Mayor in January. Barb Campbell retained her seat over challengers Sarah McCormick and the frequent overnight guest in the Deschutes County Jail—Ron Boozell, aka Rondo. Gena Goodman-Campbell won her first term as City Councilor, defeating Andrew Davis and Victor Johnson. The Council is currently taking applications for the open Council seat vacated by Russell. They expect to name the new councilor Jan. 16.

According to that office, Penner was the sole suspect in the disappearance of Sara Gomez.

Sara's body was found May 25 in Deschutes County, approximately 20 miles east of Bend. Her body was found wrapped in a tarp, comforter, blanket, foam mattress and an inflatable raft that were all bound around her body with duct tape. The Medical Examiner further noted that Sara's body was in "an advanced state of decomposition."

Recap: At a real estate forecast breakfast in February, put on by the Central Oregon Association of Realtors, presenters said the same factors that have affected area real estate for the last few years—limited inventory and an influx of new people to the area—are still in play. According to Business Oregon's website, which gets its information from the Bureau of Labor, Bend's current median home price is $404,000 and the median household income is $60,404.

No. 7 McLeod-Skinner's Feat in Deschutes County 11/9

No. 8 New Allegations Emerge Against Boddie 7/6

After losing support from House Democrats, House District 54 candidate Dr. Nathan Boddie came under fire from a local woman who says Boddie groped her at a bar in 2012. In a report published by OPB, Moey Newbold, a local community activist who works for Central Oregon LandWatch, said, "He slipped his hand down my pants, under my underwear, and I froze," she said. "He was touching my butt cheek."

During the election, FuturePAC, which represents the Democrats in the Oregon House, pulled its support of Boddie, accusing the candidate of using a "homophobic slur and promoting the illegal consumption of alcohol." Boddie—a Bend city councilor whose term ends in January—denied those accusations, and said he had been given very little information about what happened. He also told OPB he was unaware of the incident Newbold described.

After a brief stint, the Riverside Boulevard spot is now closed

After less than a year in business, the French Market closed its doors. The restaurant opened in May 2017 in the former Riverside Market location on Riverside Boulevard.

"The slow season is too slow for us to stay profitable," co-owner Phil Lipton told the Source. "We met many friendly patrons. We thank them for their support and wish we could continue to refine our service and menus."

It was once an over-grazed range that became the home of Rajneeshpuram. Now another type of religion occupies the space, along with ranchers committed to land restoration

Madras area rancher Ron Ochs, 88, says it was the most bizarre time in Oregon history. He's one of many Oregonians who recently re-lived the Rajneesh era, between 1981 and 1985, by watching the popular Netflix documentary series, "Wild, Wild Country."

When we met up with Ochs at his ranch, he was more than willing to talk about the influx of thousands of followers of the Indian guru and mystic, Bhagwan Shree Rajneesh—later known as Osho—at the Big Muddy Ranch near Antelope. The guru preached peace, goodwill and free love, and attracted a large following of Westerners, starting with his days in Puna, India.