As soon as the season shifts, families across Central Oregon turn their attention to the upcoming holidays—Thanksgiving and Christmas in particular. While both holidays are beloved by many, there is a multitude of lesser-known vibrant celebrations that take place around the world during the colder months. Many of these festivals share a common theme of lighting candles and logs to warm hearts and souls in the cold darkness of winter.

The upcoming months are the perfect time for families to educate themselves about the cultural mosaic of holidays that take place this time of year. The following are four interesting celebrations that kids will enjoy, along with a suggested activity for the whole family.

Where: Germany and in German Communities

Description: Also called Yuletide, this festival has pagan roots and can be traced back to the Norse god Odin as well as the Anglo-Saxon festival of Modraniht. Yule technically falls within the Winter Solstice and was celebrated by lighting a giant log in a bonfire and spending the long night outdoors. Today, the custom of log burning is still practiced along with the tradition of building a Yule altar, making evergreen Yule wreaths, candlelit dinners and the exchanging of nature-based gifts.

Activities: What Central Oregonian family doesn't want to spend the night under the stars warmed by a bonfire? Go on a nature walk with little ones who just can't handle late nights or the dark. Let them gather twigs and pinecones and make nature-based gifts to give to loved ones.

Where: National holiday in Israel and celebrated by Jewish communities around the world

Description: This Jewish holiday is also often referred to as Chanukah or the Festival of Lights. The eight-day festival celebrates the rededication of the Second Temple of Jerusalem and the triumph of the Maccabean revolutionaries against their oppressors. (Hanukkah is the Hebrew and Aramaic word for 'dedication'.) During this period, Jewish families will tell the Hanukkah story of how the lamp oil in the temple, which should only have lasted for one night, lasted for eight whole nights. In honor of this miracle, they light candles every night on a special candelabrum called a menorah, while gathering together to exchange gifts, play games, sing songs and eat foods fried in oil like latkes (potato pancakes) and jelly donuts.

Activities: Take your children to experience the menorah lighting for Hanukkah in the Old Mill District, which will be held on December 10, in the parking lot near the Hampton Inn.

Bring your menorah home and have your own festival of lights celebration at home for eight nights. Cook latkes, exchange homemade gifts and learn to play the classic Hanukkah game 'dreidel'. Kids will love the chocolate "gelt," or coins, that often accompany this game! 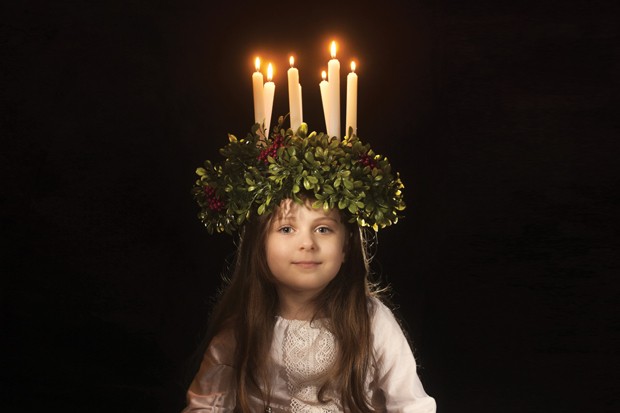 Where: Italy, Sweden and Norway

Description: This holiday pays tribute to Lucia of Syracuse, a martyr who is seen as a figure of light in the darkest part of the year. In Sweden, Santa Lucia is celebrated as a symbol of light and hope with atmospheric concerts and processions with singers clad in white and wearing headdresses featuring actual flickering candles! Traditionally, the oldest girl in the family or village will wear the flaming crown.

In Italy, the holiday is an ancient tradition that dates back to 1337 and is celebrated in Southern Italy with traditional feasts and a silver statue of the saint that is paraded through the streets. In Northern Italy however, Santa Lucia is celebrated much like Santa Claus. It is believed that she travels at night by donkey with her escort Castaldo and brings gifts to good children in exchange for some coffee for Lucia, some flour for the donkey and some bread for Castaldo.

Activities: Have your kids create a crown with flickering candles out of colored paper or other craft material. There are a multitude of crown-making craft instructions online. On the night of December 12, make bread with them to leave out along with coffee for the Saint. In exchange, leave a small gift behind for them to find in the morning.

Where: Worldwide and in the U.S.

Description: In an effort to bring African Americans together, Dr. Maulana Karenga, professor and chairman of Black Studies at California State University, Long Beach, created Kwanzaa in 1966, after the Watts riots in Los Angeles. This newer holiday is often celebrated with traditional African songs and dances. There's also storytelling, poetry reading and a large traditional meal. On each of the seven nights, the family gathers while a child lights one of the candles on the Kinara (candleholder), then one of the seven principle values of African culture is discussed.

Activities: As a family, research the seven principles of African culture. Hint: Some include faith, creativity and collective work and responsibility. Light a candle each night and discuss them.

More importantly, this is a fantastic time to talk to your kids about racism and how your family can help make your own community more inclusive. Head to the library and check out books about this important holiday.