A longtime advocate for Oregon trails wins a statewide award 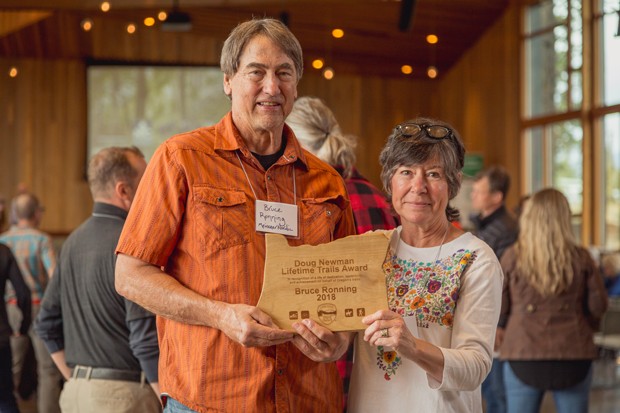 During the 2018 Oregon Trails Summit in October, Bruce Ronning considered the idea of leaving early to head to the coast for vacation. He's now happy he stayed, because after lunch, the Oregon Recreation Trails Advisory Council presented him with the annual Doug Newman Memorial Award.

Among his career accomplishments, Ronning served for eight years on the council which granted him the award—two as chair.

Born in Minot, N.D., Ronning's family moved to Portland when he was six. Through the 1970s, Ronning attended the University of Oregon and began work for the City of Eugene's Parks and Recreation department—a career move which would lead to a lifetime of achievements in trail work.

In his free time, Ronning coordinated relationships with the Deschutes National Forest, Odell Resort and Shelter Cove, which led to building and maintaining what Ronning refers to as rudimentary Nordic ski trails used for teaching.

Eventually Ronning moved to Bend and started teaching Nordic skiing for Mt. Bachelor, also serving as instructor and examiner for the Professional Ski Instructors of America. In 1988, Ronning started as Outdoor Programs Coordinator (quickly moving into a manager role) for Bend Park and Recreation District. After a 12-year stint, Ronning served as long-range planner for three years and then director of planning and development for 10 years, until his retirement in 2013.

When the city's Urban Trails Plan was released in 1995, Ronning represented BPRD as a member of the advisory committee. By that time, BPRD and the City of Bend had developed 18 miles of trail, with 50 miles identified for development. After becoming a long-range-planner, trail planning became part of Ronning's permanent duties.

He notes pushing trail plans through the city planning commission as the most difficult part part of his career. "Although Bend Parks and Recreation had conducted at least three scientifically valid studies during my time and results always show trail completion buy-in from constituents, opposition from adjacent property owners sometimes comes up. But it isn't any more contentious than anything else coming before the city planning commission."

Ronning looks back at the addition of the First Street Rapids Bridge, completion of 24 neighborhood parks and six community parks and acquisition of the Riley Ranch property as the signature accomplishments in his career—helping him earn that Doug Newman Memorial Award.

"It was a great setting with 200 trails advocates and enthusiasts in the audience," Ronning said of the award. "I am humbled and gratified to be on the list of trail people who have won. Out of the last 23 award recipients, I have worked with and know nine of them."

Making the award particularly meaningful, Ronning noted having known Doug Newman, an avid writer, skier and polio survivor. "Doug wrote a weekly outdoor column for The Register-Guard and the original Oregon Ski Tours book. I had a chance to ski with him in the '70s."

The two would cross paths often when Newman delivered manuscripts to the Register-Guard near Ronning's work at Berg's Ski Shop. Ronning remembers later encounters, when Newman was carrying an oxygen tank—necessary from resurfacing childhood polio complications. "Doug had a great attitude about life—which makes the award even more special to me," he said.

As for the trail projects he's most passionate about as a retiree, Ronning points to the south end of Bend's urban growth boundary and the proposal to connect the River Trail System to southeast Bend. If this were to happen, pedestrians in southeast Bend could access either the Deschutes River Trail north to Tumalo Creek State Park (via Riley Ranch) or south to Sunriver. Presently, there's an 11-mile commute to access the National Forest trails from the southeast side of the Deschutes River. With the bridge, this would be reduced to 2 miles—though that project has been hotly contested by some local groups, and even by legislators including Rep. Gene Whisnant.

"If that project were completed, that would pretty much complete the grand scheme. Close to 30 miles of connected trails. If that is completed in my lifetime then I will have accomplished what I set out to do. That bridge would serve Bend very well," Ronning explained.