The Deschutes Trails Coalition is partnering up to foster a future of sustainable trails in C.O.

It's a group you may not have heard of, but if you love the trails in the Deschutes National Forest—and in Central Oregon—it's a group to have on your radar. 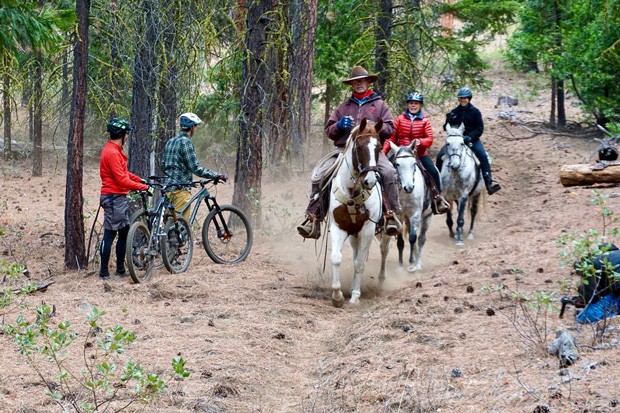 Formed about two and a half years ago, the Deschutes Trails Coalition is a partnership of environmental groups, the outdoor industry and trail stewardship organizations that have come together under one umbrella, united for the goal of ensuring a future of sustainable trails in Central Oregon.

"John, to his credit, recognized that if we're going to sustain, if you're going to keep the goose that lays the golden egg alive, we need to change how we do some things," Chalfant said. "And the Forest (Service) is seeing, every year, cuts to its rec budget, and with the kind of growth that we're seeing, we need to figure out some creative ways to do it."

The DTC partners with many groups in Central Oregon that have a stake in keeping trail systems alive and well. The DTC has come up with a small grants program that helps with trail construction, maintenance and education through the $1 For Trails, where people can add $1 to their receipt from purchases such as lift tickets, hotel rooms and other items from partners including FootZone in Bend.

In 2018, the DTC raised $60,0000 in grant money for its Small Project Grant awards, which helped construct the 1 ¾-mile snowshoe trail that connects Upper Three Creeks Sno-Park and Jeff View Shelter near Sisters. According to Danielle MacBain, DTC coordinator, most of the money for the grants came from the $1 For Trails Program.

This summer, a new funding partner should arrive on the scene, via Visit Bend, the marketing agency tasked with promoting Bend tourism. Visit Bend is a member of the Pledge For The Wild campaign, which includes a group of five mountain towns with the vision of supporting responsible tourism in wild places, according to pledgewild.com.

According to Kevney Dugan, president/CEO of Visit Bend, donating to keep the trails that locals and tourists alike use will be simple: Text with your mobile phone "wild4bend" to 44321 and make a donation to the DTC.

Dugan said the recommended donation is $1 per hour for time spent in Central Oregon's outdoors. With 4.1 million visitors to Central Oregon per year, Dugan said other than the transient room taxes collected at hotels and vacation rentals, there was no other program for visitors to give back to the outdoor systems they use.

"If we don't take care of the asset, are we going to have a tourism industry in 10 to 15 years?" Dugan said.

Dugan said he wanted to be clear that all of the money people donate through the Pledge For The Wild goes directly to the Deschutes Trails Coalition, not Visit Bend.

Chalfant said the money raised through pledges will allow the DTC and its partners to help maintain trails and improve conditions—dealing with impacts like erosion, impacts to wildlife or social impacts like trail congestion.

"It all comes back to a growing awareness that you know, we're playing in a sensitive playground and we need to take better care of it than we have in the past," Chalfant said.

Chalfant said people who want to get involved in helping the area's trails can join groups that are part of their recreational experience.

Chalfant said it's worth noting that Central Oregon and the Deschutes National Forest are not the only places being overwhelmed with growth in recreation, but that the DTC's efforts won't succeed unless people get out and get involved.

"Whether it's getting involved with the recreational user groups, or the environmental groups like Rocky Mountain Elk Foundation or the Sierra Club, getting involved is critical," Chalfant said. "But (DTC Coordinator) Danielle would kick me if I didn't mention putting your money where your mouth is, is also critical."