Members of the business community and people who live around Cascades East Transit's Hawthorne Avenue Station voiced their displeasure to the Bend City Council on May 1 about problems they feel aren't being addressed at Hawthorn Avenue bus station just east of Third Street in Bend. 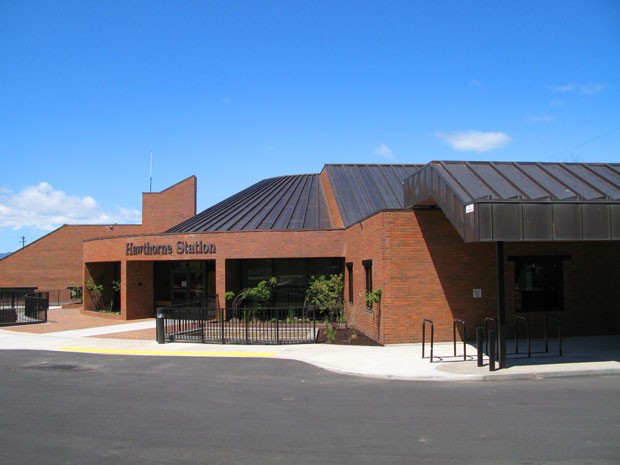 People spoke about crime, transients, buses blocking driveways and traffic issues in the area. In a letter dated April 24 from the Hawthorne Avenue Neighbors to the Central Oregon Intrergovernmental Council—which oversees CET—the group said that even though they were appreciative of the COIC reversing its decision to ban smoking at the station—and is currently working on a smoking area—the feedback they've received from members of the group is they've seen little progress on crime, safety and traffic flow issues generated by the station.

DeeDee Burzynski, the co-owner of Denture In, told the Council that buses block the entrance to her business. She said transients sleep on the roof, threaten patients and lock themselves in the bathroom and shower in it.

Stacey Sabin, who represented Bend Family Dentistry, said during the Council meeting that the transient population is "horrible," and employees are afraid to go out into the parking lot.

Ken Fuller said Bend has a wonderful transit system and passing it on to COIC was a great vision, but the location has failed.

In a letter dated Jan. 22 of this year to the COIC and Bend Police Department, the Hawthorne Avenue Neighbors wrote that after 12 years of the station being in its location, the change the community has felt has not been for the better. The group wrote that an underlying issue to many of the problems—trespass, drug use, property damage, assaults and theft—are because the station isn't adequate to accommodate the activities that must naturally occur there.

Tammy Baney, COIC's executive director, wrote in an email to the Source that COIC shares the concerns raised by the community and that COIC is committed to working with the City and community to identify what the transit facility and transit needs are for the future.

The group of business leaders wrote that they remember hearing in 2006 that a transit station would take over the old Cascade Natural Gas building where Hawthorne Station is currently located. They wrote they thought the transit station could mean positive change for business by bringing more customers to the area and by giving employees and neighbors more transportation choices.

But as of the April letter, the group wrote it's seen little change.

In the long-term, Baney wrote that COIC has applied for a Oregon Department of Transportation Statewide Transportation Improvement Fund grant for $124,850 to help fund a renovation of the interior of Hawthorne Station. If approved for the grant, COIC wrote it anticipates being able to make the improvements in late summer of this year. Baney said COIC hopes to have an answer within the coming weeks.

The HAN wrote in April that businesses are still being blocked by buses, and that residents on Hawthorne Avenue continue to have buses driving down their street and alleyways, despite drivers being told that it isn't permitted. Business owners also report that their bathrooms are still being used by intercity riders.

Baney countered by saying the region, and primarily Bend, is growing quickly. She said COIC will address the long-range facility planning in the 2040 CET Master Transit Plan over the coming year, which not only addresses Hawthorne Station but also the City's interest in mobility hubs throughout the community.

"This will require our community to come together to support those who rely on transit to have a full and independent life, while also helping us to strengthen our transit system to meet the education and work force needs of our community as a whole," Baney wrote.

But Erin Foote Morgan, a representative for the Hawthorne Neighbors, said COIC is out of sync with the long-term transportation planning for the City of Bend, which may cause some missed opportunities for an improved transit station in Bend. Foote Morgan alleges that COIC is more than a year behind in its planning.

In a letter to the Citywide Transportation Advisory Committee, the HAN wrote the City will soon begin testing projects and revenue streams with the public in preparation for a transportation bond. The letter stated that if the City and COIC were tracking together, there may be a chance to address transit infrastructure with the bond—along with other funding opportunities, including urban renewal, state grants and earmarked Congressional funding.

"Ultimately, the buck stops with the Bend City Council if we're going to have transit," Foote Morgan told the Source.

Baney, who began her tenure as executive director in January, said she doesn't disagree with the HAN that COIC is a bit behind with its 2040 Master Plan, but adds that the reason is because COIC had to wait for ODOT approval before it could move forward with the planning. That didn't come until late fall or early winter last year, she said.