How the 2020 transportation bond will change travel in Bend

The 2020 Transportation General Obligation Bond passed in 2020 with a strong majority of support, showing that people in Bend have taken notice of the growing problems with traffic congestion, poor walkability and unsafe biking.

So with the bond passed, now what?

It took three years for the City to create an implementation plan that would address problems in the community before putting it out to vote. After numerous meetings with stakeholder groups, polling and public forums a Transportation System Plan was released. The 143-page document details the goals, elements, funding strategies and implementation plan for the next decade and beyond.

The result is a plan that improves on east/west travel, safety for bicyclists and pedestrians and continued funding of the transit system.

Twenty-two of the near-term projects completed under the bond are road projects to alleviate congestion and better connect east and west Bend, and improving intersections that get cluttered with traffic. The projects include widening lanes, improving highway access and intersection improvements.

As those who travel near the 15th and Reed Market intersection know, seeing a train crossing during busy commute times means backed-up traffic in many directions. tweet this

Roundabouts and signal improvements include those at 15th Street and Wilson, Bear Creek and Pettigrew and Colorado Avenue at US 97.

"There's a lot of other projects that improve capacity as well as safety by implementing either signal or roundabout improvement," Burr said.

The City will work with the Oregon Department of Transportation on connectivity to highways—with major projects being ramps at Butler Market Road and Murphy Road. 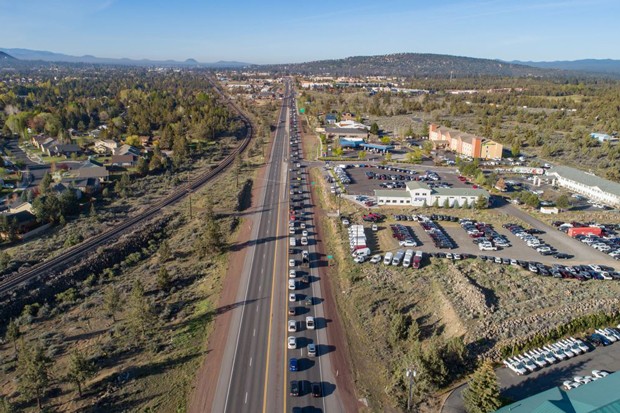 "Right now we just have a southbound on-ramp and a northbound off-ramp, but getting the other two ramps built is certainly going to improve capacity at that interchange," Burr said of the Murphy Road projects.

Another of the keystone projects the City will undertake is the Reed Market Road railroad over-cross that will bypass the railroad tracks and eliminate any need for cars to stop for train crossings. As those who travel near the 15th and Reed Market intersection know, seeing a train crossing during busy commute times means backed-up traffic in many directions.

An issue not technically funded by the transportation bond, but that will drastically affect driving conditions, is the US 97/US 20 Corridor. The project will divert a portion of Hwy 97 that passes by the Cascade Village Shopping area to the east, and what was Hwy 97 will be converted into Third Street. The area frequently experiences high volumes of traffic. While 2020 saw lower numbers than years past, Highway 97 still saw plenty of traffic.

"Our high month was August of last year was 57,552 vehicles going both directions per day," said ODOT Public Information Officer Peter Murphy. "It declined last year a little bit due to COVID, I think, but the trend has been steadily upward."

In June, ODOT will request bids from contractors, and construction is expected to begin in Fall of 2022.

"This project will realign one of the most congested portions of U.S. 97 in the City of Bend and improve a section of U.S. 20. The U.S. 97 Bend North Corridor project includes a realignment of U.S. 97, improved intersections, new ramps connections at critical locations to improve local and highway traffic, and pedestrian and bicycle facilities," ODOT wrote on its website.

These projects will alleviate some of the traffic woes of people who are frustrated with more time spent in cars during commutes, but will also help commercial drivers have an easier way around the community.

"We have a lot of different delivery vehicles to our residents throughout our entire community. We have delivery vehicles that come into our community that are larger and serve our retailers and our restaurants. We also have a lot of local delivery," Russell said. "So we need to be sure that people count on those services to be able to move throughout our town and to get the products and the services they need."

But roads only make up a piece of the puzzle, and a lot of the bond will go toward "multimodal," or more diverse forms of transportation, in the city.

Much of the bond will go toward improving the walkability of the city. Many areas, more often in the older areas of Bend, lack any type of sidewalks and large right of ways on the street.


"In some of the originally platted areas, they have really broad and wide right of ways, but they never put in the sidewalks," Russell said. 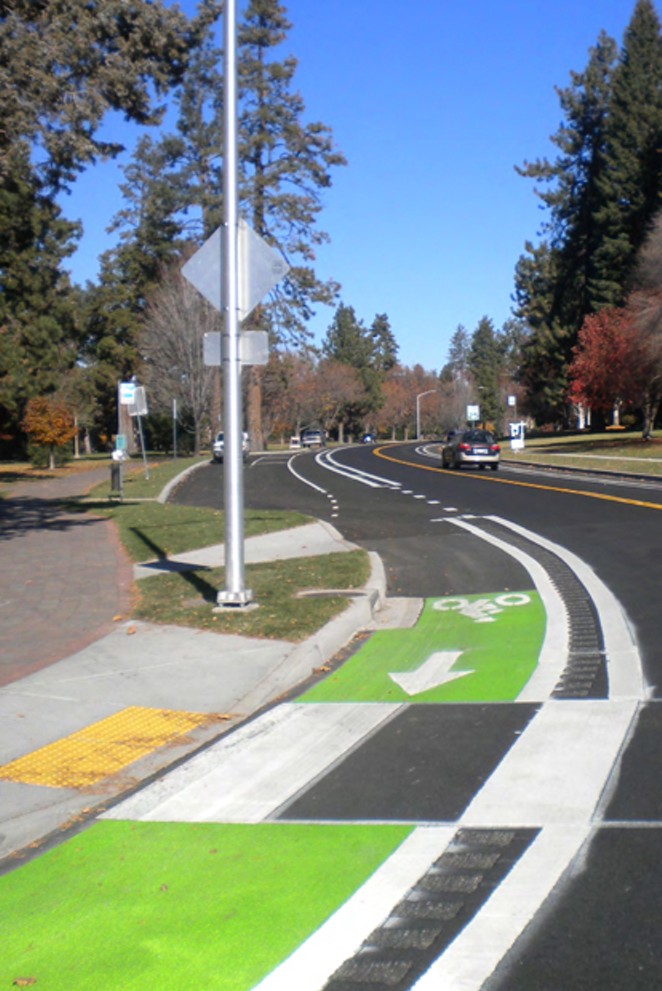 Russell said the need for sidewalks was a big concern for people when the City was creating the Transportation System Plan. The main focus of adding sidewalks is to create a safer environment for people to go short distances around town.

"That makes this multimodal construction even more important in those parts of the community that never had that opportunity to even walk their kids to the park that's a mile to half-mile away, or walk with their kids to school," Russell said.

To complement a more walkable community, the Transportation System Plan also expands on the current state of transit. Cascades East Transit currently runs nine routes in Bend, but under the TSP would expand and improve with more routes and better access for people, with tools including real-time tracking of bus routes through GPS.

Related Did Bend Leave Public Transit in the Dust?: Public transit receives less than 2% of total funding scheduled in the new Transportation System Plan—and some are crying foul

Did Bend Leave Public Transit in the Dust?
Public transit receives less than 2% of total funding scheduled in the new Transportation System Plan—and some are crying foul
By Laurel Brauns
Local News

"It's gonna look really different than the transit that we grew up with," Russell said.

The TSP also calls for mobility hubs to be placed in all four city quadrants and in the core area to end the current reliance on Hawthorne Station for bus routes—an issue that may placate the neighbors around the current Hawthorne Station, who complain about it being unsafe and not designed as a formal bus hub. The new hubs will be places for bus stops, but will also host secure bicycling parking, car and bike share services and shuttle services.

Biking is popular in the city, and Bend has garnered a reputation as a "bike city." But much of the infrastructure in Bend keeps cyclists on the streets next to cars, which can cause stressful rides around town.

"When people think about 'bike city,' they're thinking mountain biking, they're thinking primarily in terms of recreation," said Ariel Méndez, board member for Bend Park and Recreation District and a safe streets advocate. "But as soon as you start thinking about biking for transportation, like biking to the grocery store, or to the doctor's office or school, it's like a whole other ballgame." 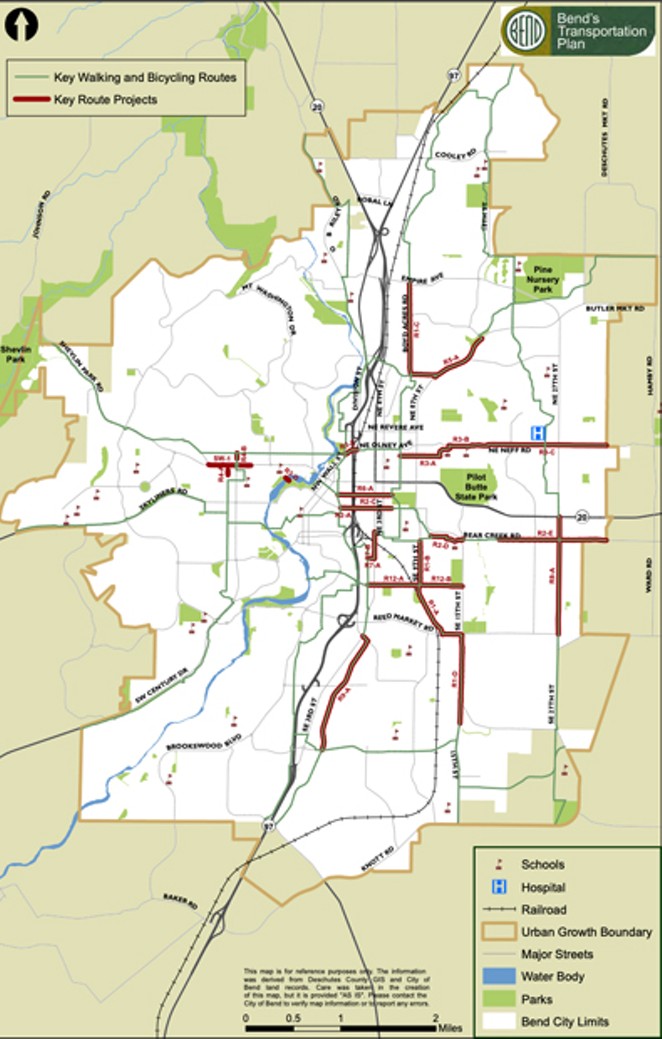 Bond funds focus on 12 key routes that will connect pedestrian and bike routes that make multimodal transportation less stressful and more viable. Unlike Neighborhood Greenways, which are meant to be bike paths on less-busy streets, these paths will be buffered from traffic, or disconnected entirely from roads.

"They cover a lot of Bend, and they will connect people with a lot of important amenities, whether that's their work or shopping or even tourists to come to town and hopefully take advantage of these key routes," Méndez said. "I'm not satisfied with more buffered painted bike lanes, because I think the evidence shows that's not what gets more people out and feeling comfortable biking."

"What I'll be focusing on is establishing a core of east west and north that are really safe and convenient for people," Méndez said.

Méndez believes the best way to get more people biking is physical barriers between biking on streets, as well as separate bike paths. He believes this will make travel more pleasant for both bikers and will reduce many of the issues facing drivers.

The City implemented equity mapping as a tool in the planning process, which stresses the importance of diversity of transportation methods to ensure an equitable access to transportation in Bend for all incomes.


"It's equity mapping to make sure that, as we are looking at the goal of people who work here can live here, you've got to begin to recognize that to own a car, to maintain a car, to charge a car, put gas in a car, to have insurance on a car, is really expensive," Russell said.

Equity mapping recognizes the different needs of people making different incomes in Bend and providing alternative ways that they can travel. The process works "to make sure that we're providing to those neighborhoods throughout Bend who may have less financial capacity then making sure we're getting the right, whether or not it's transit services, or whatever products they need on the ground for them to move through our community safely and equitably from right, from an access point, from a financial point," Russell said.

The City's citizen-led transportation bond oversite committee was scheduled to hold its first meeting on May 18, the first of many in which members will advise the City on how to implement the transportation bond. Most of the near-term goals could be completed if funding from various partners can be secured.


"At the city we have quite a few different partners, whether it be the park district, the county, COIC (Central Oregon Intergovernmental Council) which is our local Transit Agency and it kind of just depends on the facility," Project Engineer Burr said.

The oversite committee will be instrumental in deciding on the priority of projects over the next several years.

"The idea is to get all of these projects done in the next 10 years, and it's going to be on this public committee, the oversight committee, to help city staff develop a prioritization for all these projects," Burr said.

If the City is able to leverage those funding sources and finish projects under budget, it may be able to get a jump on mid- and long-term goals beyond the 10-year plan it is working from.

"It's synergy of projects," Russell said. "If we do a good job, and inflation doesn't get out of control, then we're really fortunate, I'm very hopeful we will have additional dollars to go further."