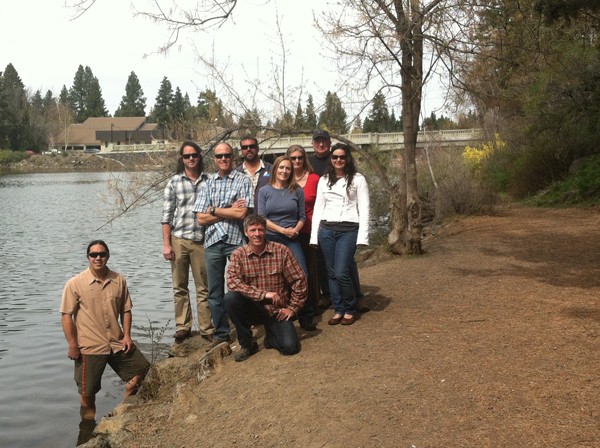 s a kid growing up in Washington, D.C., David Blair remembers his mother taking him down to the banks of the Potomac River and watching the kayakers go by. His mother wasn't necessarily an advocate of outdoor recreation, and Blair said that she might not have even known what all those people were doing out there. But those early experiences showed Blair what kind of community could be created through recreation.

About 40 years later, this interest has served as the seed for an idea to save both Mirror Pond and appease environmentalists who want to remove the dam and let the river run free. Along with loosely affiliated cohorts, Blair has become an advocate for a hybrid solution. That is, instead of simply pulling out the deteriorating PacifiCorp-owned dam at Newport Ave., dredging accumulated silt or rebuilding the 100-year-old structure that enables the pond's existence, Blair's plan removes the dam, and in its place constructs a smaller dam (or a weir, which is more like a spillover) a bit farther north. It remains to be seen whether this proposed hybrid solution is Solomon's wisdom, or, to mix metaphors, is indeed feeding two birds with one seed. That is, could this plan both maintain Mirror Pond largely in its current configuration while also creating a financially sustainable model—as well as creating a flow that allows fish and floaters to navigate the river unimpeded?

(For the past several years, the question about what to do with Mirror Pond has bewildered and beguiled city officials. The problem is two-fold: PacifiCorp, which owns the dam, wants to unload it; and, simultaneously, that very dam—the one necessary to create Mirror Pond—has proven its age by springing leaks. City council has unanimously voted to preserve Mirror Pond, but it has yet to propose what to do with the ailing dam that creates the pond, or how it can afford to preserve the dam and pond.)

Blair claims his plan takes the most desirable pieces of various other proposals, combining them and putting forth a solution that could garner wide, public support.

As inviting as the idea sounds, it's still just an idea—and it remains uncertain whether the proposal will receive a wink of consideration by the various decision-making bodies looking at the issue—including Bend City Council, Bend Park & Recreation District and the Mirror Pond Ad Hoc Group, a committee comprising elected officials, Park District staff and three plain-old residents.

In part, Blair just hopes to move forward the conversation.

"I've watched these machinations and wasted years and wasted hundreds of thousands of dollars, believing that at some point, the city would ask some professional river hydrologist or engineer—there are people out there, people in town," Blair said.

But, so far, it seems as if even this hybrid solution is simply adding to the talk, and isn't creating any real movement forward toward any solution. And, moreover, it's offering little, if any, data to properly guide that conversation.

urrently, no organization is conducting a study to figure out the feasibility of Blair's plan. And without engineering studies—and just as important, an analysis of cost—his hybrid proposal most likely will languish. Simply dredging sediment is projected to cost $5.7 million, and would need to be done every 30 years; decommissioning the dam would cost about $7 million.

Project manager and landscape architect with the Park District Jim Figurski said the district was in talks with PacifiCorp about releasing operational information that could lead to a better understanding about what would work best to resolve the Mirror Pond debate. That information will be forthcoming within the next few weeks, he said.

Meanwhile, executive director of the Upper Deschutes Watershed Council Ryan Houston said that whatever conclusion is reached, it will need to be a values trade-off, balancing recreation, environmental and historic ideals. And, of course, cost will remain an important aspect of planning to consider.

He added that the hybrid solution is one of the most expensive proposals out there, and he is unsure about its longterm viability, as well as future maintenance costs.

Houston said he could not immediately think of a scenario similar to the one playing out in Bend.

City councilor and member of the ad hoc group Victor Chudowsky said not only is the group's hybrid proposal "doable," but it has support from the community. But he is concerned about the cost.

"Let's say (the power company gives) us $5 million. With that, some sort of hybrid solution can be done," Chudowsky said from behind a pair of sunglasses at Crux Fermentation Project last week.

But that does not seem feasible—sort of like paying someone to tow your beater car away. It is rumored that, at best, Pacific Power would offer $1 million for the city to assume ownership of the dam—a number far short of the several million necessary for the removal of the dam and subsequent construction of a weir.