On Aug. 28 Donald Surrett Jr. and Glenn Bennet were shot and killed by a gunman in a Bend Safeway, and two others sustained non-life-threatening injuries during the attack. The initial harm done by the shooter was followed by a collective trauma felt by many in the Bend community.

Shoppers who were present and people shocked by the act of violence have sought help from behavioral health services in the days following. An open invite to counseling from Deschutes County Behavioral Health and the Deschutes County District Attorney's Victim Advocate was offered at Pilot Butte Middle School the Monday and Tuesday after the attack and at Deschutes County Stabilizations Center Wednesday to the following Monday. 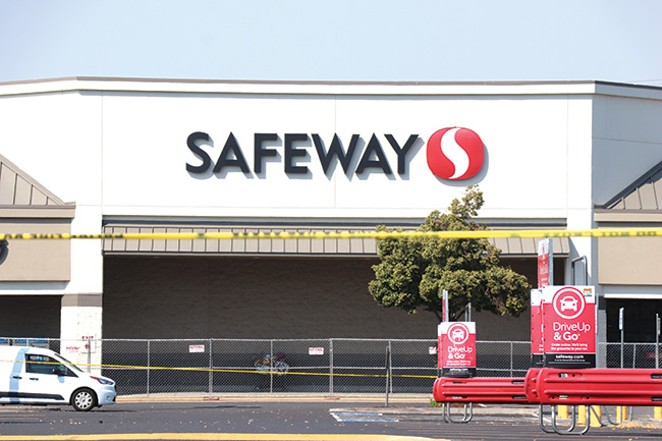 The Source Weekly spoke to Shannon Hodgen, a mental health counselor with Deschutes County Behavioral Health, in the aftermath of these sessions to learn about treating trauma, DCBH's approach and the immediate needs of the community in the wake of violence.

The conversation has been lightly edited for clarity.

Source Weekly: I'd start just by asking what your typical day to day job is?

Shannon Hodgen: My typical job as a behavioral health specialist is seeing individuals and running groups, with clients. And so, on any given day, I'll see between four and six individual clients and then run a group counseling session. And then there's also lots and lots of documentation and administrative tasks on top of that, too. That's kind of the typical day—this is not typical but this is also what we do, what we prepare for.

SW: And about how many people have utilized this service? And what are the immediate needs of people experiencing trauma?

SH: I had been present at the Pilot Butte Middle School, I was there Monday and Tuesday. And I want to say it was probably between 35 and 50 folks those two days? And then the immediate needs of people experiencing trauma, I would say, is to have a safe and potentially confidential place to talk about what they saw and what they heard and what they did, and the whole experience without fear of exposing anybody else to further trauma, and just trying to feel better in general. Because a lot of people are really struggling with a lot of things that were sort of tangential to it, and that were directly involved.

SW: And I do want to ask about the range of people affected by this. Are there different approaches for people who maybe didn't experience trauma firsthand, but are nonetheless impacted by this?

SH: I would say that, in general, this is getting into kind of the brain science of it, which I really am interested in and appreciate. Trauma occurs in the same place in the brain pretty much for every human being. And so, my experience is that if you've been traumatized, you've been traumatized, whether it's vicariously, generationally or directly. So, the first step being in all of that is having a place that's comfortable, that's safe, and where you can share your experience and get support. I think we approach everybody initially, pretty similarly, and just providing that supportive space and allowing them to process.

SW: What informs the county's approach to providing these services? And how are support staff trained to address it?

SH: We're using critical incident stress management skills. There is a group of us within the county that are trained in this specific intervention. And so, we utilize that initially, and then there are sort of sub-interventions within that, that we're also using. One of those interventions and the one that we're using, I would say the most, I've seen the most, is called the SAFER-R model of crisis intervention with individuals. And so that is an acronym for Stabilize, Acknowledge the crisis, Facilitate understanding and normalization, Encourage effective coping, and Recovery or Referral. So that's pretty much what we're using with folks.

SW: What are the effects of someone not seeking help, and in these circumstances, where they have this trauma and they may not utilize these types of services?

SH: The things that people are talking to me about when they do utilize services, obviously, because I'm services, I am hearing a lot of people feeling really hyper-vigilant in their homes, which means they're just on super-duper readiness mode all the time. So, whether it be in their homes, when they are going to the supermarket, a lot of people are talking about feeling very resistant about sort of doing normal daily tasks, like going to the store, or being out in public, being out in areas where there are a lot of people. And they're uncomfortable. So, you know, there are lots of things that people experience. But I would say that's probably the first one. I'm hearing people having difficulty with sleep. I'm hearing people sort of not having appetite, or having too much appetite, just kind of like a lack of equilibrium that they didn't have before this happened. Those are the kind of the big ones.

SW: This whole program got started less than 24 hours after the traumatic event. How did this get conceived and implemented so quickly?

SH: When we have a group of people who are trained in this model of critical incident stress management, we are ready to be deployed as soon as an incident occurs, whether that incident be something like what occurred on Sunday night, or whether that is any other kind of incident. So, you know, I think there are also those of us who recognize the fact that there would need to be services deployed pretty quickly. And so, there were a lot of people who stepped up and said, 'Hey, you know, please place me where I'm needed.' And we were ready to go.

“Human connection and communicating with other human beings and finding community and shared experience is really important. It helps with the processing of this event. And isolation doesn't tend to be helpful.”—Shannon Hodgen tweet this

SW: So there wasn't kind of a strategy already in place, this was just a reaction to this happening?

SH: I would say there was, I think that there is a plan in place for things like this. I'm also fairly new to the county. And what I can say is, we had a fast response, in addition to the rapid engagement structure with it.

SW: What would you say to community members who haven't sought support, but are still impacted by this?

SH: What I would say first and foremost, is talk to somebody. Human connection and communicating with other human beings and finding community and shared experience is really important. It helps with the processing of this event. And isolation doesn't tend to be helpful. So, I would say, first and foremost, reach out to another human being—a trusted human being who's a healthy support. The second thing I would say is, if you can work yourself into a place where you can engage with a therapist in the community, whether it be Deschutes County or another helping professional, I would encourage them to do that. And there's so many ways to do that right now. You know, if they can bring a friend with them to the middle school, or come here or another counseling organization, and just see somebody. I think the other thing that I would say is, as the level of stress in your life goes up, so to must the care of self. So, doing things like being mindful about taking care of your body, getting adequate sleep, and if you can't sleep, get some rest, drink water, eat food that is healthy and nurturing for your body. And I would say most of all connect with other human beings about the experience.

SW: The counseling available at the middle school is a great first step for people needing help. But I assume there's some medium to long-term support. And I wanted to see what the forward thinking is at Deschutes County Behavioral Health and whether that's a targeted program or just connecting with resources?

SH: This is what we call an initial response. There will be longer-term responses that last into the future regarding this incident. So, this is one of those times where we're meeting with people in short duration and kind of high intensity. And then as we start to see if people are able to resume equilibrium or not, and they continue to have issues, that's where we would certainly make referrals. We would get them additional supports, maybe we would get them connected with a therapist here to continue doing work, and make additional recommendations for folks, for sure. I don't have information about ongoing services specific to this incident at this point in time. But I know that we have been briefed that this is the initial response, and there will be continuing response into the future.