Eric Leadbetter’s son was born on April 1. From there he and his wife Briana were stuck quarantining at the hospital for the next five or so days due to COVID-19.

The local musician was given a front row seat to see just how hard the staff at St. Charles was working and the conditions they had to work through during the pandemic. 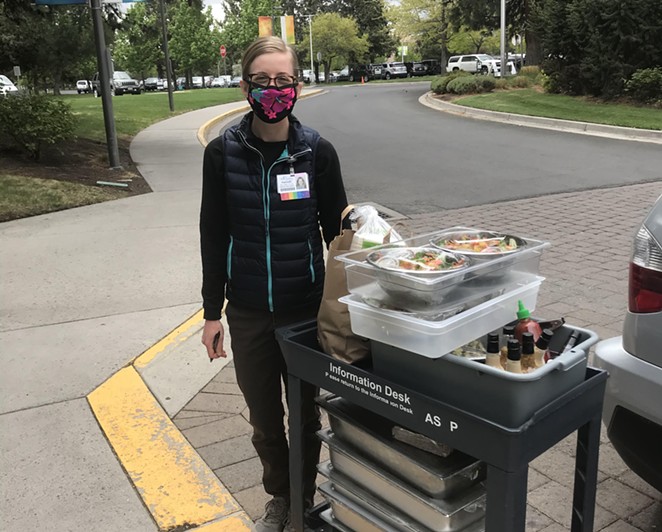 “The hospital staff was so cool there, they really were top of the line,” said Leadbetter. “I asked a couple of the nurses how we could repay them for bringing our kid into the world and the overwhelming answer was food.”

From there the St. Charles Meal Mission was born.

Leadbetter decided he’d host live stream concerts with a digital tip jar, choosing to buy the birthing unit food that first week. The mission ran a total of six weeks, and by the end Leadbetter was no longer the only one involved.

“After the first couple [live streams], Bobby Lindstrom reached out to me on how he could help. And then a lot of musicians in the area jumped on.”

Other musicians included the likes of Bill Powers, of the duo Honey Don’t, as they asked for donations during their Honey Brunches live stream shows on Saturday mornings. It was a total team effort, and the music and food scenes here rallied together to pull off something special.

To make it work, Leadbetter partnered with food trucks in the area, many of which were also looking to get business and be more active during the time of stay at home orders. Some of the participating food trucks included Big Ski’s Perogies, Dump City Dumplings, Bleu Rooster, Parilla Grill and more. Sometimes the food trucks would even offer up grub at discounted rates since it was going to a good cause. Even Ben & Jerry’s was donating ice cream—sometimes even enough for some of the patients.

“The whole idea is they did something nice for our family so we wanted to do something nice for them,” explained Leadbetter. “It was really nice to get help from other musicians. It made it last longer than it would have on my own.”

Finally coming to a close after six weeks of running the mission, Leadbetter says they were able to feed around 200 to 250 hospital workers through their combined efforts, including every unit at St. Charles.

It was a perfect recipe for doing good.

“It was a triple whammy,” said Leadbetter. “The food carts needed business, I needed work, the hospital needed food.”