We ask the question, Is that truffle flavor you're tasting the real thing? 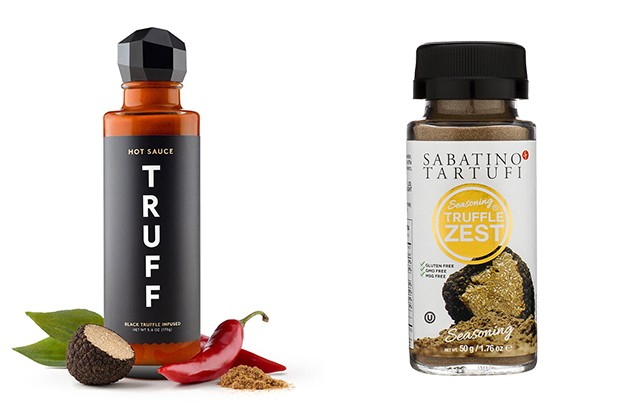 Oprah recently released her favorite things of 2018. Of the food items, 25 percent of them included truffles. Is this just a continuation of her own truffle obsession, or an indication that truffles are about to trend harder?

A friend recently told me she licks her truffle salt. In an article in Bon Appetit, Oprah said she carries truffle zest in her purse. When I told my friend about that, she responded, "OMG, it's a sign of powerful women!" Maybe—or maybe a lot of us are more obsessed with the earthy, musky, deliciously quirky truffle than we realize.

The truffle products that made Oprah's favorite things of 2018:

Costing an average of $3,000 per pound, truffles are one of most expensive foods in the world—difficult to find and finicky to cultivate. Because they grow underground, they're tough to find without the help of pigs or dogs. Thousands of species of truffles exist, but most of them you don't want to eat. One of my dogs finds and digs up mushrooms in the forest when we hike. She started doing it after I took her morel hunting with me when she was a puppy. I get excited when she finds an underground fungus that looks like a truffle. But I'm usually disappointed, as well as nasally assaulted. The scent is usually a weird combination of earth, poop, rot and umami qualities like parmesan.

The edible truffle species desired by chefs are white, black and burgundy, with white found in Oregon—growing symbiotically in the root systems of Douglas firs. If you want to learn more about truffles and where to find them, check out the Central Oregon Mushroom Club, typically offering a meeting about truffles in the fall.

In our desire to consume this precious fungus, some people fake it. In an episode of "Master Chef," Joe Bastianich said that most truffle oils are made by perfumists, using no white truffles at all, adding his opinion that seeing white truffle oil on the menu at a restaurant is a good reason to run away.

Bastianich is mostly right. A majority of the truffle oils on the market are made with manufactured aromatic compounds, including 2,4-dithiapentane—a molecule that simulates the taste and smell of truffles, according to the American Chemical Society. Even though these aromatic compounds contain no truffles, companies can legally put truffle aroma, truffle flavor or truffle concentrate on a label. There are some truffle oils on the market containing real truffles. Among producers, Oregon White Truffle Oil from Dundee, Ore., and Joel Palmer House Oregon White Truffle Oil in Dayton, Ore., produce oil made with real Oregon white truffles. The truffle oil in the Sabatino truffle pasta night kit on Oprah's list contains real truffles, as well.

Truffle oil isn't the only product prone to fake flavoring, so always check the label. Truffle salt can be flavored with 2,4-dithiapentane, too. I bought a jar of white truffle sea salt at Navidi's Olive Oils and Vinegars downtown and was happy to find the product contains only Italian white truffles and sea salt. I like to sprinkle it on popcorn, potatoes, eggs and avocado toast. If you buy truffle oil or truffle salt, both products are typically used when finishing a dish. Fresh truffles are a little different. You can cook with them, but you'll want to limit their time on the heat because their aroma disappears quickly. This is important because most of what we taste is derived from smell.

The majority of the truffle products on Oprah's list contain real truffles. The items that contain essence, along with real truffles, are the mustard and ketchup in the Urbani truffle kit, the Torres black truffle potato chips, the truffle zest in the Sabatino truffle pasta night kit and the Truff hot sauce. If you don't need to buy a gift but you want to enjoy truffles like Oprah, consider buying the truffle zest. You already know she's carries it in her bag—but why? Because she says you never know when you're going to run into a dish that needs a little zesting.

If all this fungi talk has given you truffle fever, put the Oregon Truffle Festival on your to-do list. The festival starts in early January and hosts a truffle dog championship, dog training classes, opportunities to eat and buy truffle products and learn about the truffle cultivation industry.