Good news, swan lovers, and those who believe in private landholders helping species at risk. There are now more wild Trumpeter Swans to go into the breeding pool. Several residents of Aspen Lakes, under the leadership of Robin Gold, have been helping the two trumpeter swans, Eloise and Pete, raise a family.

A small group of Aspen Lake neighbors, including the Cyrus family, have pitched in to help the breeding swans ever since they arrived. Actually, the group also purchased Pete, a new cob (male swan), and paid for his transport from North Carolina to Oregon. Gold is the main caregiver and Pam Olivier backs her up when she's away. 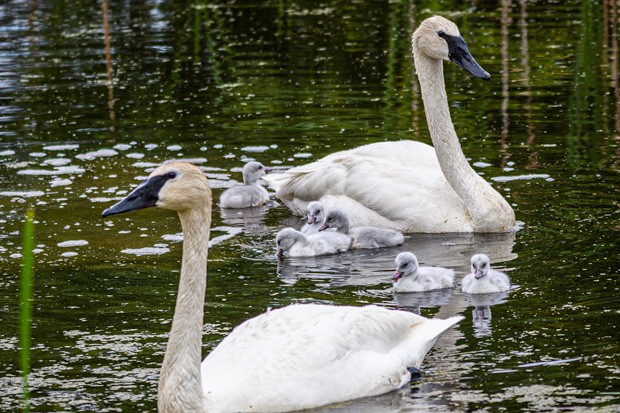 Residents purchased a bubbler to keep a portion of the lake unfrozen in the winter so the swans can keep swimming.... which, Gold says, "Is vital to their health." In addition, the residents have supplied automatic feeders stocked with waterfowl maintenance food for juveniles and adults and waterfowl starter for cygnets (baby swans). Gold has named the supporters, "The Friends of Eloise/ Pals of Pete."

Over 150 years ago, John James Audubon wrote about how inspired he was watching Trumpeter Swans as they go about their business, untroubled by the doings of humans — but the humans were blowing them out of the sky for their delicious meat, beautiful feathers and tough skin.

However, thanks to the determined efforts of conservationists across North America, future generations of bird lovers today are continuing to be mesmerized by these impressive birds.

Wildlife biologist Corey Heath of Bend's office of the Oregon Department of Fish and Wildlife office says swans (Tundra and Trumpeter) are not legal to hunt in Oregon — period! A couple of years back, that was an expensive lesson for a waterfowl hunter who was arrested for killing swans around Lakeview.

All private swan pairs, such as those at the Cyrus', are held under a U.S. Fish & Wildlife permit, and ODFW moves their young to Summer Lake Wildlife Management Area to establish a "hub" for them to move out and establish breeding territories of their own. They will winter at SLWA, however.

The breeding of Trumpeter Swans at the Aspen Lakes development began several years ago when the Cyrus family purchased four trumpeter swans as an attraction for the pond. That didn't work very well, as three of the swans were killed or died. The recent introduction of the male swan has gone off beautifully, however, thanks to Gold, and other homeowners involved.

Pete, the cob, is now five years old. He was three years old when he arrived, and he and Eloise, the pen (a female swan) had one cygnet the spring he arrived two years back.

This year, Eloise, one of the original four purchased by the Cyrus family, and her partner, Pete, created a nest full of nine eggs, which is high considering her age. Three of the eggs failed, and the pair ended up with six healthy cygnets. They'll remain with their parents until they're about 10 months old then they'll be sent off to SLWA to join other cygnets of this season to establish their own breeding territories.

North America is home to three species of swans: the native Trumpeter, and Tundra (formerly known as Whistling Swan) and the non-native Mute. The Trumpeter Swan is the largest waterfowl in North America and the largest swan in the world; it's also the world's heaviest bird capable of flight.

Trumpeter swans are huge, majestic birds with snowy white feathers, jet-black bill feet and legs, and an 8-foot wingspan; they're something to behold. At close range, a thin orange-red line can be seen on the lower part of the bill, which just makes them even more beautiful.

Because the Trumpeter is often confused with the smaller, more northerly Tundra swan, hunting them is not allowed in Oregon — but it is in Nevada and Utah. Because of that, the similarities of the two have led to a high mortality of Trumpeters in those two states.

Now, in spite of the illegal shooting, North America's most spectacular water bird is coming back strong in parts of its historic range, thanks also to reintroductions, prohibitions on hunting them and the gracious helping hands of people like the residents of Aspen Lakes.