This step is just the beginning for the soccer organization's bigger vision to eventually complete its all-season sports complex at Pine Nursery Park on Bend's east side, with a total of four fields. 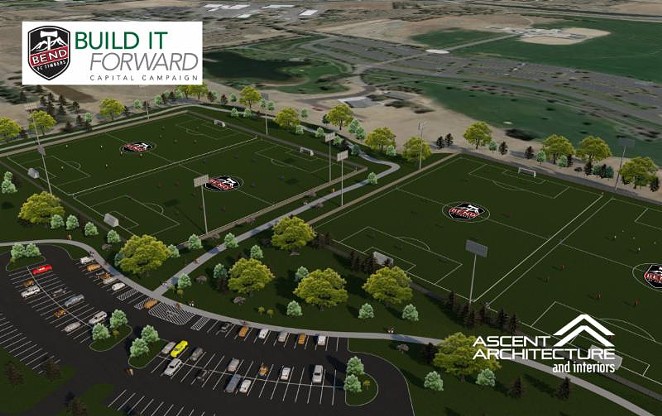 "To have the permit secured means that we get to cross the threshold into the next phase of our Club's history," BFCT President Adam Carroll told the Source. "We need them to prepare our players to compete against Portland teams and to offer the programming and predictability that our membership expects. These fields—and the future phases of the project—will allow us to meet those needs."

BFCT plans to break ground in just a few weeks, with a celebration to follow upon completion and a club-wide pre-completion event in the early fall. There will be more details on this and the process once construction begins.

To continue with meeting the goal of finalizing the complex, BFCT will unveil a "brick" fundraising program where families can join in to leave their mark on what will be an exciting amenity to have here in Central Oregon. There are also other ongoing fundraising programs to participate in that will help fully fund the rest of Phase I and the future of Phase II, which will ultimately include two more fields.

At the present time, the only turf field in Central Oregon is at Summit High School—though Bend-La Pine Schools also has plans to build a turf field at its new high school, to be built on Bend's south side. That school is set to open in fall 2021, according to BLPS.

"We are incredibly grateful to those that have believed in and contributed to the project over the years, and I am personally thankful for the leadership that Tara Bilanski and Tammy Ambrose have shown in actually taking this project to this finish line — and allow us to start the next race," continued Carroll.

For those interested in these fundraising opportunities, you can reach out to tarabil@bendfctimbers.com.