Turkey Vultures are Back Again | The Source Weekly - Bend, Oregon

Turkey Vultures are Back Again

In spite of all the snow and cold, turkey vultures are on their way north, to their summer haunts. While air temperature does play a role in the movement of turkey vultures and other birds, it's really the sun's relationship to the horizon and the amount of daylight that controls their migration calendar. If you see a turkey vulture, also known as a TV, soaring overhead, perched in a tree, on a pole or slurping up roadkill—and it's wearing a patagial tag like the one in the photo shown here, please send me an email ASAP: jimnaturalist@gmail.com. (The word "patagial" refers to the wing of a bird.) 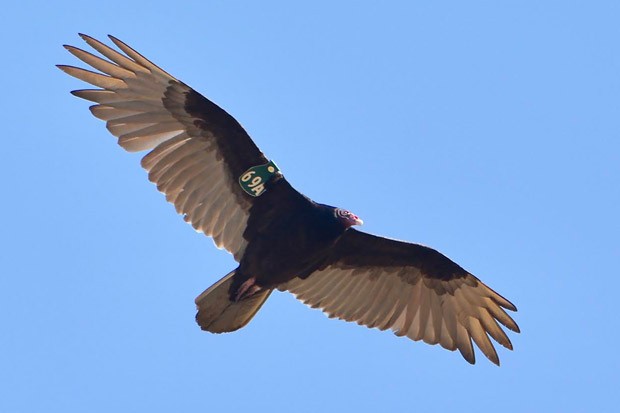 Wildlife biologists in Canada are doing a huge TV study, trying to find out when and where they take themselves south in winter and how widespread they are in summer in Canada. Those patagial wing tags are very noticeable, and easy to read, and the number and color can be/must be reported accurately.

After you have notified me that one flew over the cuckoo's nest, while you're still sitting in front of your computer, Google the term "Bird Banding Laboratory." The first prompt you may get is, "Banded Bird Encounter Report." Open that and follow your nose, and you'll eventually be at the page where you can tell the banding lab what you've seen. In a few days you'll receive a certificate of appreciation from the lab for sending in your sighting and information on who, when and where the bird was banded.

But more importantly, you'll probably cause a scientist in Canada to leap off his or her seat and shout, "Hey, we got a recovery from Oregon! How about that!" That, in turn, will cause a whole bunch of scientists in the program to start rethinking what they thought was going on with TVs in Canada, and the U.S., as well.

There may be a relationship between the TVs that visit Oregon in summer and climate change. As an example, birders in western Oregon are seeing TVs today in places where we usually don't see them until late February. For example, on January 29, a birder in Toledo, Ore., reported seeing a TV. Then, my old pal, Chuck Gates, retired science teacher and long-time birder, reported photographing a TV at Fern Ridge Reservoir in Lane County.

On that same day, another birder in Eugene put this up on the Oregon Birders Online website: "That's near a site that has been a winter roost for maybe 15 years. Toledo is probably an early migrant, but there are enough wintering in SW Oregon these days that it may not have come far."

So, not all the TVs that breed, eat dead sheep, cows and roadkill in the Willamette Valley go off and spend the winter near Baja Mexico and the Imperial Valley in Central California.

The birders who are vital to the science of ornithology are the ones who keep accurate records; citizen scientists who furnish data helping the scientific community understand the life history of birds. Events such as the Christmas Bird Count are a wonderful example.

Can you imagine what will go through a TV's mind when it comes soaring over the deer winter range and smells the delicious aroma wafting up from those deer that perished in the Big Snow of 2019? They'll think they've died and gone to heaven—as did the coyotes, bobcats, eagles and other meat-eaters who discovered them earlier.

In closing, the tagged TV in the photo here was photographed in May 2018 in Wisconsin. According to the Banding Lab, it was banded in September 2016 near Saskatchewan, Canada.

In my days of banding TVs years ago, I was notified by the Banding Lab I had to quit using the standard leg band, as TVs use their excrements for temperature control, and are not too sanitary doing so. They defecate and urinate down their legs, and the result is the waste products will sometimes build up between the band and the bird's leg, causing infection.

If someone wants to become qualified to put patagial markers on TV nestlings, I'll take you to the old caves they use. But be prepared: It's a tight squeeze, and very stinky.