"The Turning" offers the Worst. Ending. Ever.

Sometimes...sometimes there's an ending so terrible...so completely immune to rational thought and logic that the audience sits in stunned silence staring at the screen, wondering whether to laugh or cry at the bizarre intimacy of sharing a moment of deflated expectations with a dark room full of strangers.

In high school I read Henry James' 1898 ghost story "The Turn of the Screw," and was surprised how much I loved it. The novella follows a governess hired to move to a secluded country estate to teach and take care of pair of orphaned children. Pretty quickly, the governess begins to believe the grounds are haunted and the children possessed, which in turn makes her start to think she might be losing her mind. 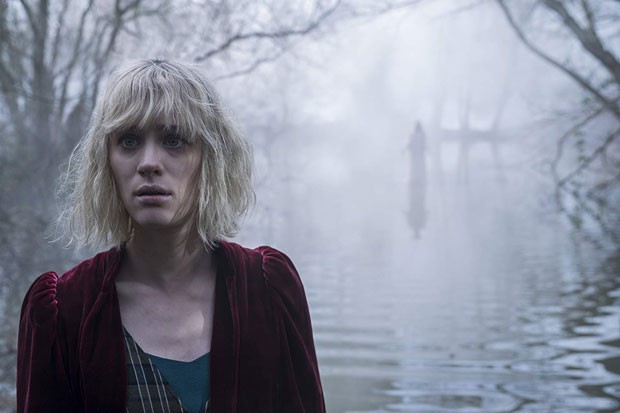 The best thing about the novella is the delicious ambiguity. Even though there's ample evidence of malevolent spirits at play, there's still a strong argument that James was attempting to comment on the Gothic trope of the "hysterical" woman. Lit scholars still argue the point in 2020—a sign of the story's continued relevance.

"The Turning" comes very close to being a good movie, just based on the strength of the direction. Floria Sigismondi (the entrancingly specific eye behind music videos for Perfume Genius, David Bowie, Sigur Ros and Marilyn Manson) does an excellent job creating a classical Gothic tone and building a strong spine of tension. Setting the film in 1994 is a baffling choice, but doesn't hobble the film like it could have. Instead, it gives star Mackenzie Davis some interesting post-Nirvana fashion choices and modernizes the nastiness of the children in a way more relevant to a modern audience.

The jump scares were solid, the two kids creepy and everything set for it to be a decent, if unmemorable, little horror flick. Then the final five minutes happened. Remember how we talked about the delicious ambiguity of Henry James' novella? Yeah, imagine that ambiguity turned into something akin to the movie blowing a raspberry and goosing you, all at the same time, right before the lights come up.

I want to spoil it so very badly but I can't. Wait, I CAN AND I WILL!

A dream within a dream within a dream all happen within, like, five minutes, so the audience is, like, "Wait, did anything I just saw really happen?" Just when you think you're about to find out, THE MOVIE SMASH CUTS TO BLACK IN THE MIDDLE OF A SCENE. We see a reaction of terror on the face of a character, and the movie ends without showing us what she's looking at.

I guess that can be interpreted as ambiguity, but it's really not. It's an unfinished film. I know there were issues with the film before production, and the script and director completely changed, but that shouldn't have left the final product feeling incomplete. It genuinely seems like they either ran out of money, time or ideas before they could finish.

So, this ending happened when I and maybe 10 other people were in the auditorium. The credits rolled and everyone burst into laughter at the complete inanity of what just happened. We all looked at each other, "Did that just happen?" It did. It happened. We will never get back the 94 minutes stolen from us. I'm almost impressed with "The Turning" and everyone involved for having the courage to release this in theaters. Almost.