OSU-Cascades professor Bahman Abbasi leads research to bring desalination systems to the masses, along with efforts to decontaminate fracking wastewater and process the brines for lithium-ion batteries

On a planet where 70% of the area is covered by water, only 3% of that is fresh water—and only a small fraction of that is available for drinking. More than 884 million people don't have access to drinking water, and that number is only expected to grow as the planet warms.

But what if we could tap into the rest of that 70%?

That's the question that fuels Assistant Professor Bahman Abbasi's research at Oregon State University-Cascades—the largest research project on the campus. He and a diverse team of researchers are pioneering studies on desalination systems, creating a portable device that uses renewable energy, like solar or geothermal, to turn saltwater into drinking water. 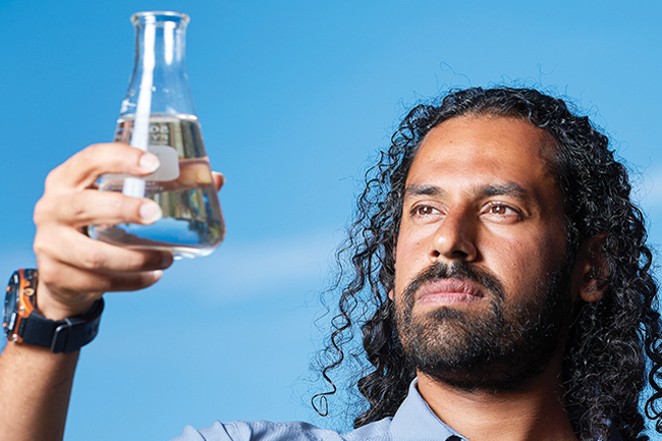 Abbasi's drive to combat water shortages is, in part, personal. He grew up in Iran, where water access was intermittent at best.

"I remember being a child and you had to fill up tubs of water when water was running, just in anticipation of water getting cut out," he recalled.

Upon coming to the U.S. for school, he discovered one way to address water access issues that was being vastly overlooked: thermal desalination systems. Most widely used desalination systems rely on reverse osmosis, where a membrane is used to filter out the salt from the water. This process can be expensive and creates an ultra-salty water byproduct, which is often dumped back into oceans.

Abbasi's system, on the other hand, avoids this process entirely. He instead uses low-grade heat sources, like solar, to separate the salt from the water. This process is a lot cheaper, he said, and it results in solid salts that can be sold for profit.

The goal? "Democratize desalination systems for the masses," Abbasi said. Unlike current systems, Abbasi's device will be transportable and ideally fit in a 20 foot-box—well-suited for refugee camps, war-torn villages and disaster sites. The system would allow communities to produce water from local bodies of water with local energy sources.

“I remember being a child and you had to fill up tubs of water when water was running, just in anticipation of water getting cut out.”—Bahman Abbasi tweet this

Abbasi's team of about a dozen researchers comes from seven different countries across the globe. A whiteboard in the lab features quotes from their native languages—an attempt by Abbasi to cultivate an environment where civil society is respected among the researchers.

"They know about water shortage," he said. "And my hope is after they graduate, or they finish their studies they can help us establish businesses in the U.S. and across the globe (to address water issues)."

Oftentimes, important research flourishes in labs but never sees the light of day. Abbasi's team, however, is focused on implementation. In October 2020, Abbasi cofounded a company named "Espiku" (which means "white mountain" in a local Iranian dialect) to actually bring this technology to the market.

"That was when we decided our research was yielding the results that we hoped for," Abbasi said. "Now we need to take a step forward." Espiku's water systems don't stop with saltwater. Abbasi's team is also researching a system that uses thermal energy to decontaminate the wastewater from hydraulic fracturing, or "fracking." Currently, fracking wastewater can go into local water sources and have huge environmental costs for surrounding communities. With Espiku's system, mining companies could process that water so it's not toxic, and—while it still wouldn't be clean enough for drinking or irrigation purposes—it would be safe to store on the surface or for other industrial uses.

"We introduce a cost-effective method for the companies to actually clean their wastewater," Abbasi said.

While developing this solution for dealing with fracking wastewater, the team saw an opportunity to create another sister technology: a device that processes the salty brines for lithium-ion batteries, the rechargeable energy sources that fuel electric cars. The U.S. currently produces less than 2% of the world's lithium supply. Abbasi's system—still in the early research phase—aims to create more opportunities for processing lithium-rich brines domestically.

As the global market moves toward renewable energy, lithium production has been widely critiqued for its environmental impact. Using local heat sources, Abbasi's system would be able to process the lithium brines quickly and with little environmental impact. The Espiku team is currently a semifinalist in a $4 million U.S. Department of Energy competition for companies developing green, economically viable ways to extract lithium brine. The team will find out in July if it makes it to the next round.

Over the years, the Department of Energy has been a huge funding source for Abbasi's research, awarding the team over $5 million combined for its various projects. Funding also comes from the M.J. Murdock Charitable Trust, the OSU Venture Development Lab and the National Renewable Energy Laboratory.

The systems for producing fresh water from saltwater and decontaminating wastewater are built and ready to start pilot phases, depending on available funding. The lithium-related system is still early in the research process. Although the team must jump through many hoops to fund its research and bring its technologies to the market, Abbasi's vision remains clear, particularly when it comes to saltwater desalination. He imagines putting the system in a community home to refugees or war in East or West Africa.

"They finally have a reliable source of water from their local resources," Abbasi said. "And I picture myself sitting there and watching that scene, and tell myself, 'We've finally achieved it.'"