It may have blossomed when he was a baby sitting on the counter, watching his parents make his baby food—but whatever it is, Reggie Strom definitely has a passion for baking. By the time Strom was a toddler he was in the kitchen with his grandma.

"I would help her bake pies, Christmas cookies," said the 12-year-old Pacific Crest Middle School student. "All the simple things I could help with a bit." 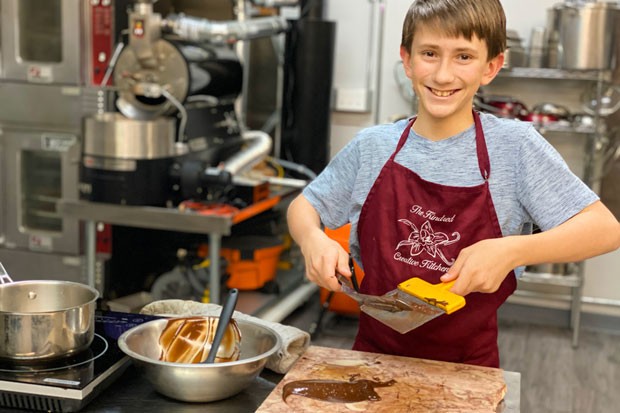 Seeing that he loved to bake, Strom's parents gifted him a French macaron class at Kindred Creative Kitchen for his birthday. One class turned into several. His instructor, Chef and Owner Michele Morris said, "I noticed first of all that he was really organized, which is rare, and he had that pastry spark in his eye." Having experience as a chef-instructor for the baking and pastry program at Cascade Culinary Institute, Morris is familiar with that spark. Still, she said, "even there, not too many people have that."

One day, the Food Network contacted Morris, asking whether she had any students interested in trying out for the "Kids Baking Championship" show. Strom came to mind.

"I thought it was a bit crazy," Strom said of the idea. "I never thought about applying to a national TV show until then."

That crazy idea turned into reality. Strom competes with 12 other young bakers, ranging in age from 10 to 13, in season 8 of the "Kids Baking Championship," starting to air this week. The kid contestants show off their baking chops through challenges most adults would find difficult. Celebrity Pastry Chef Duff Goldman and actress and celebrity chef Valerie Bertinelli are the judges. This season's challenges include 3D dinosaur cookies, Neapolitan desserts, ice cream cone cupcakes, potato print cookies, fruit cakes and more.

When asked how he prepared for these bakes, Strom said, "I would just kind of bake right when I got home, like a ritual almost. Get home, bake something and give it to the neighbors." With all that extra baking, Strom said, "Our water bill went up 40% the month before I went on the show."

Locals can watch Strom on the new season of "Kids Baking Championship," premiering Monday, Jan. 6 at 9 p.m. on the Food Network. The first challenge tests the kids' cake decorating abilities with a groovy 1970s twist. They have to create shag texture cakes—but before they can create carpet out of frosting, each baker selects a cake flavor they must make from scratch.

Strom couldn't give any details about what happened to him on the 10-week show, but he did share his favorite memory: "Seeing the set for the first time was quite amazing. It was really cool to see the entire kitchen." That kitchen includes professional equipment, including blast chillers to cool food quickly, as well as large convection ovens. It definitely seems like a high-pressure environment for any home baker, but Strom was nonchalant, saying, "It wasn't terribly intimidating; there were just more powerful versions of what we have at home."

Did Strom make it to the grand finale and win the title of Kids Baking Champion along with $25,000 and a feature in Food Network Magazine? The confidence Strom projected throughout his interview gave me the impression he had the ability to make it far on the show. While we have 10 weeks before we find out, he did share some inspiration for other kids who want to follow his path. "There is no harm in trying. It's just kind of hit or miss," Strom said coolly. "You don't get on if you don't try. My tip is to just practice." He added, "I would take some classes with Michele; that's where I learned my skills and more elevated desserts."

I had to know if Strom would put himself through this kind of pressure again. He replied, "Yes, I would do it again. It's absolutely amazing and not something you could do anywhere else and meet kids with the same passion as you." Strom wasn't sure where baking would take him in the future, but for now, we'll have to wait and see where it takes him on the Food Network.