Natalie and Allison Closner dish on their latest album, women in music and the dynamic of being sisters in a band

Portland's Joseph is a powerhouse trio of sisters, tackling a range of rock, pop, folk, R&B and everything in between. Natalie, Allison and Meegan Closner are currently in full-swing tour mode, celebrating the release of the group's third studio album, "Good Luck, Kid."

As Natalie and Allison were getting out of a Lyft, we hopped on the phone. While Meegan wasn't able to join in on the conversation, her two sisters had plenty of great things to say about the secret comedian in the family. 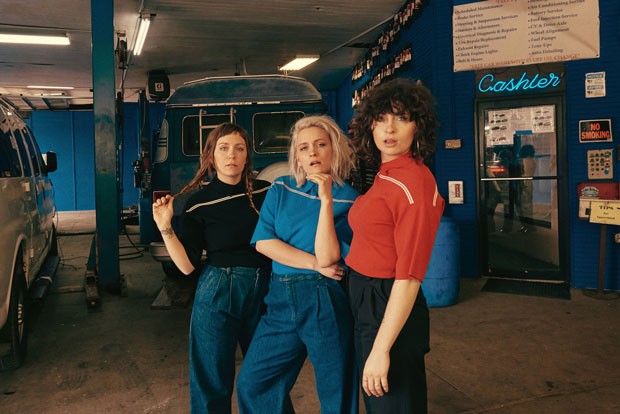 Source Weekly: Listening to "Good Luck Kid," I noticed you're dipping your toes into a lot of styles. You have songs like "Presence," which is very rock, and then "Enough in Your Eyes" is this ambient R&B song. Was that something you were focused on when recording, or are you now just more comfortable expanding your sound?

Natalie: I think we just wanted to serve the songs. Every song is different in the production and we wanted to just dress them up in the clothes they should wear. And we love all kinds of different music—so it was just really exciting to take it to a broader pallet than we have in the past.

SW: Looking back to when you released "Native Dreamer Kin," to now, how do you think you have grown as a band, or even as sisters? Are those things intertwined?

Allison: When we did "Native Dreamer Kin," we'd been kind of making music for a little bit but not that long really. "Native Dreamer Kin" was like the first major collective thing we'd done. Meegan and I were really brand new at it; we had only recorded one thing before it and we were just backup vocals. It was a big learning curve for Meegan and I, and since then I feel like we're all a bit more seasoned at making records and whatnot, but we're all just better friends now, too.

SW: This interview is part of our Women's Issue. What other female artists or bands do you think deserve some more recognition?

Allison: I'm always listening to Japanese House. I love their music. This girl Taylor Janzen just put out a song called "What I Do" and I really like that.

Natalie: The new Brittany Howard album is absolutely amazing! They're about to release an album, but the band that we're touring with, Deep Sea Diver, is absolutely unbelievable. Jessica Dobson is the lead guitarist, and it's her project. She's really exciting to watch.

SW: What are some things the music industry needs to work on in regard to representation, equal pay, opportunity or other issues in regard to female artists?

Natalie: I think there needs to be more initiatives and opportunities to get women in the studio. Engineering sessions, doing more production work. I think that's a huge part of the industry that's really missing a female presence. I think it's just starting to pick up.

SW: Being an all-female group, have you ever experienced any troubles with those things?

SW: I wanted to close out with some bonus sister questions, sort of like superlatives. I know Meegan's not here to defend herself or answer, but I think you can still do it. Who would you say is the life of the party?

Natalie: Usually it'd be me, but I feel like I'm becoming an old woman. [laughs]

Allison: It depends on different scenarios. If you're talkin' like with a bunch of strangers? Natalie is 1000% the life of the party. If it's a lot of closer people I think I can teeter into that zone. Meegan is a really good buddy. She's so, so funny. But most people don't see that part. I honestly think she might be the funniest one out of all of us.

SW: Well that's funny, because my next question is who would be the best standup comedian?

Allison: Although I don't think I'd ever have the guts to do that. That's one of the scariest jobs alive. If you don't get people laughing you've totally failed.

SW: Who would be the most likely to crowd surf during a show?

Allison: Meegan never would. She doesn't really like being touched by people she doesn't know.