Under the new guidelines, operators of lottery machines can have up to six people indoors, though bars and restaurants are still limited to outdoor-only dining. Capacity remains at 50 people per outdoor dining establishment, but now, restaurants can create enclosed dining pods and have tents with two sides, rather than just one.

"These modifications allow for a maximum of six people indoors at facilities over 500 square feet (for all indoor activities except dining) with associated guidance for ongoing social distancing, cleaning protocols, and face coverings. For facilities smaller than 500 square feet, the modified guidance allows for 1:1 customer experiences, such as personal training," reads the Governor's press release.

A chart, issued by the governor's office and shared with the Source by the Oregon Restaurant and Lodging Association, show what will be allowed:

"Since restaurants are unable to operate with people wearing face coverings at all times the restaurant modifications include modifications to tents and allowance of outdoor dining pods for better outdoor space utilization. This modification also allows for VLTs [video lottery terminals] to be turned on for indoor play," explained Jennifer Purcell, North Coast Regional Solutions Coordinator for Brown's office in an email to hospitality professionals obtained by the Source.


“Oregonians in our industry can’t pay their monthly bills with two weeks of employment certainty at a time,” said Jason Brandt, President & CEO for the Oregon Restaurant & Lodging Association. “The reality of the 2-week county risk category assessments is taking us down a dangerous path where tens of thousands of Oregonians no longer have paychecks again. The lack of continuity in operations is permanently altering too many Oregonian livelihoods. We must open some indoor dining statewide now, and we can do it safely.” 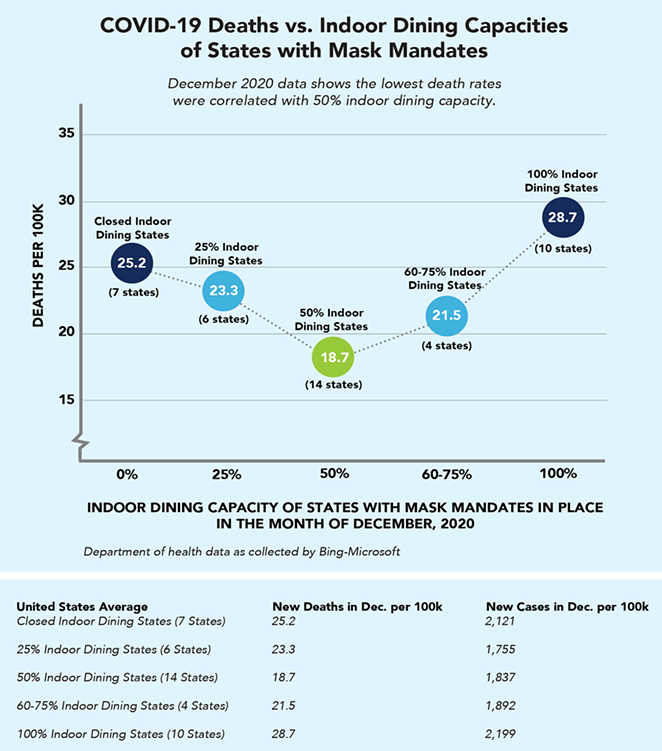 According to Brandt, Oregon's "aggressive economic restrictions" on food service establishments lack the data to support ongoing shutdowns. In a release Tuesday, ORLA released an analysis of data appearing to show that "no correlation between the number of cases and deaths and the decisions to close indoor dining." According to its data, compiled by Bing-Microsoft, the states with the lowest death rates were those allowing indoor dining at 50% capacity.


"There is no formal dialogue taking place between government officials, health advisors, and industry leaders to fully understand the devastating impacts prolonged restrictions are having on all aspects of Oregon’s once thriving hospitality industry,” Brandt stated. “The data above should bring us all to ask one important central question – what evidence is there to justify the crippling impacts of ongoing closures on Oregonians?”

Presently, Oregon's county risk levels are announced every two weeks. The next risk-level announcement will be announced Feb. 9, going into effect Feb. 11.