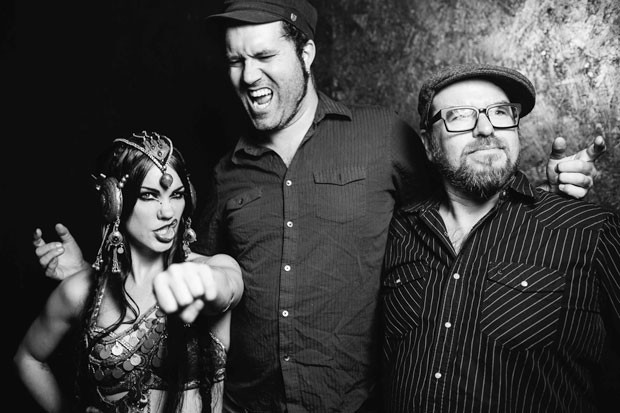 Oakland-based world music masters Beats Antique have built a career on blending sounds from cultures spanning the globe. The band once played a show in front of the Great Pyramids, and no, we're not talking about the Luxor in Las Vegas. They've traveled the globe in search of new and interesting sounds, speaking the universal language of music.

"That's the thing," Beats Antique drummer Tommy Cappel says. "Music doesn't have barriers or borders or boundaries or languages. It doesn't require anything but passion. Someone who doesn't know what I'm saying can hear what I'm playing and understand what I'm communicating. It makes it possible to do what we do and sometimes we don't have any words to say to each other."

Cappel continues, speaking about when the band played in front of the Great Pyramids. He said the local Egyptian band that opened for them played traditional music and understood the concept of the song they would be singing together with Beats Antique from the translator's description. The Egyptian band sat in with Beats Antique, who described the song they would sing together, "Veil of Tears," as being about the death of an experience inside you that you can use to rise above. The singer of the Egyptian band nodded, "Ah, yes," in his own way—complete comprehension through music and shared emotions.

In addition to performing at the Great Pyramids, Beats Antique has performed all across the planet. When we spoke, Cappel had just wrapped rehearsal for the band's performance the next night at Red Rocks Amphitheater in Morrison, Colo. The historic venue ranks among Cappel's favorites he's ever played.

"It's an honor to perform at Red Rocks," Cappel says. "There are some places that are great venues or great cities, or the crowd is really into it, whatever it is. Red Rocks is different. It has this energy to it that you cannot deny. It's very rare for a place to contain everything that Red Rocks does because it has all of this history and all of these artists who've played there."

Cappel continues on to describe Bend as one of his favorite places to perform as well. He loves the coffee in Bend—it's his favorite thing—and describes the crowd as, "off the hook." They've performed at iconic venues like The Fillmore in San Francisco, and in foreign countries including Australia, China and Russia, as well as all over the United States—and they still love coming to Bend as often as possible.

"We feel really fortunate to be able to do this and also to get to see and meet all of these people who are so rad and different," Cappel says. "We really cherish our audience. We really love the people that support us. It's not an everyday occurrence that you get to do what you love and thrive that way."

For some, the thought of not only performing music that originated in another culture, but to blend multiple genres can be daunting. For Cappel and the rest of Beats Antique, they credit their style and the ability to mix various genres of music to intuition.

"Certain genres and style and contexts go together and some don't," Cappel says. "It kind of narrows itself down when someone has an idea and we can flesh it out. At first, it's sort of trial and error and we try to match up different styles so we're not strictly one thing. It's definitely a group effort. Each one of us can bring an idea to the table and we vet it. If there's a performance element or a melody or a rhythm that's part of the idea and then one of the three of us takes that, and that's when we become producers."

The last Beats Antique album debuted in 2016 and they have big plans for their new material. Cappel describes the forthcoming album as having an interesting sound. They are currently working on and performing new music, which you can expect to get a taste of at their performance at the Midtown Ballroom.

"It's a little more circus-y and strange and bizarre," Cappel says. "We're sort of deviating— doing it Beats Antique style, but as a whole the concept of the album is a bit of the strange, a bit of the bizarre, a bit of a circus or a carnival, a bit of a celebration."