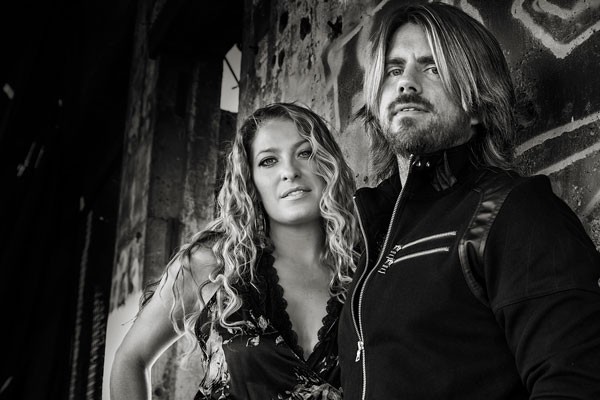 Odds are you've probably heard of Cloverdayle. Maybe you went to Bend High School with singer Rachel Hamar. Or maybe you saw them open for country superstar Jason Aldean at the Les Schwab Amphitheater in 2009. Me, I caught them performing at a Christmas party, of all things.

The country music duo, which consists of Hamar and husband Chad, has strong Oregon but relocated to Nashville four years ago. This week, they return to Volcanic Theatre Pub for a special acoustic performance.

"Our crowd tends to be a listening crowd there," Chad says of Volcanic. "People actually hearing the lyrics. We treat it more like a show in Nashville. As a songwriter, we love getting to tell the stories behind the songs."

"We get to tour the Northwest in the summer," Rachel says of their current schedule. "We've spent a lot of years building a fanbase in the Northwest. Every year it gets to be slightly bigger than before. It's good, our Northwest people are so awesome. They show up every time and embrace what it is that we do."

The pair still draws inspiration from the Northwest. Cloverdayle, which they purposely misspelled, is named in homage to the small coastal town of Cloverdale, where Rachel's family has a beach house.

"Whenever we're in town, if we can get away to the coast we do," Rachel says. "Cell phones don't work there; you're kind of off the grid. All of a sudden everything else is shut off so it turns on the creative button. I think that is the thing we love the most about it."


While the duo does a lot of writing in Nashville, Rachel admits to having pages and pages of inspiration in the Notes section of her phone, added during times on the road and being at the Oregon coast.

"That's the place I feel most comfortable," Chad says. "Back in Nashville, you meet in sterile writing rooms, and while you can pull from places where you were inspired, it's not quite the same."

Chad and Rachel recently finished their latest single, "Scars," while at the Oregon coast. The song, which debuted last month, tackles a more personal topic — the physical and emotional scars shared among all people.

The initial inspiration for the song came from a scarring time for the . Four years ago, they found out Rachel had stage four endometriosis, leading to a major surgery, as well as the news that they would likely not be able to have children. Rachel describes not only having to recover from major surgery, but also realigning their thinking about the possibility of having their own children, and where they wanted to go from there.

"Everyone's got some form of scars. Emotional scars, physical scars," Rachel says. "Chad and I were talking about all the things that have actually caused us scars that would apply to everyone. We wanted to incorporate all of those storylines into the song because we knew that those things were universally true, but also they came directly from our personal experiences."

The duo, who recently celebrated 18 years together, plans to continue promoting "Scars" into the spring. They'll launch a Kickstarter campaign to fund their next album in late January and early February. With a deep love of working in the studio, the pair says they already have enough material written for two albums.