As Bend tops another list, we ask, does it really matter if everyone knows about us?

The groans could be heard for miles. Native Bendites, filled with nostalgia for a not-so-forgotten time when a commute down Greenwood Avenue was swift and parking was a breeze, grumble each time such lists emerge and attract out-of-towners to our recreational city. "Voted number one? Again?" said Brad Culeston, who works at a westside bike shop, "The last time that happened we got annihilated with tourists. Phil's (trail) is jam-packed, man." 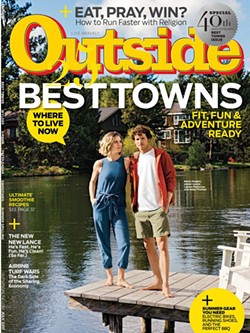 Outside magazine's current July 2017 issue boasts Bend as not only the number one multisport town in the entire U.S.A but it also prominently features our fair city on the cover.

Yep, that's right, folks — an additional 700,000 people are eyeballing us this month with a digital reach into the millions— and smiley Outside magazine dubbed "power-couple" Lauren Fleshman and Jesse Thomas as our reps.

"There are so many things to do that, if one thing isn't working, you don't have to drive hours to do another," said Fleshman, an ex-pro runner and co-founder of Picky Bars — a gluten-free, vegan, energy bar. Fleshman was — in part — chosen as a showcase of the supportive entrepreneurial spirit Bend boasts. With more than 80 outdoor-related Bend-based businesses, it is easy to see how "Outside" views us as a shining example for other tourist-based markets.

"Whether we like it or not, at the base level — against what maybe the entire community thinks — it is a wonderful acknowledgement of an amazing multisport town and vibrant community," says Visit Bend's Director, Kevney Dugan. "I think we should celebrate instead of demonize this accomplishment." Dugan is well aware of the flack that this recognition may garner from locals who view Bend as gaining too much media attention in recent years. However, he is quick to point out that Outside magazine did not contact Visit Bend and notify them of the honor and that Visit Bend did not have "anything to do with them choosing us," according to Dugan.

In times when rental rates are at or below one percent and the population is growing faster than any other of Oregon's eight largest cities — at 3 percent per year according to the Census Bureau — many locals wonder why Visit Bend is promoting the area at all. Local Sarah Stewart laments, "Don't we have enough problems without more people coming in? The traffic is already so bad and the roads are horrible."

In fact, Dugan notes that Visit Bend has turned down its promotion of Bend in the summer months, changing tactics in 2013. "Ninety percent of our marketing is directed towards the shoulder and winter seasons" he says. "We've actually seen occupancy down last June and July and it was flat in August. We've stopped the heavy marketing of summer... trying to bolster the shoulder seasons and seen the occupancy level off." Dugan does acknowledge that those occupancy rates may be skewed. "In fairness, there may be more availability as new hotels have been built."

Other contributing factors are the rise of available occupancy and increase of short-term rental services such as Airbnb — that have nearly doubled in recent years with more than 650 licensed vacation-rentals in the city alone. Mount Bachelor boasts it's had its "best season in 10 years," and tourism experts expect this past winter season to reinforce Bachelor's place on the map as a top west coast skiing destination. The newest chairlift opened up another 600 acres of downhill terrain and the downhill bike park is steadily growing in popularity.

Recreation isn't the only pull and co-author of the article Tim Neville writes, "There's a booming tech industry, an exploding food-cart scene and a growing number of concerts—this year's include Paul Simon and Ween." The list also salutes Bend as the fastest-growing city in the country, noting the new whitewater park as a major draw. It lists the over 150 miles of trails in the Deschutes National Forest as an additional plus.

"Not enough?" Neville asks, "Smith Rock State Park and its hundreds of climbing routes are just 30 miles north (though 20,000-square-foot Bend Rock Gym is ­closer), and the trail running is so good that ultramarathoners train here."

Too Boastful or Right on Target?
And do these lists even matter?

Changing format, the magazine abandoned its usual method of asking readers to choose a list of best adventure towns, opting for a "Special Advisory Council" instead. Those experts included Jenn Dice, vice president of PeopleForBikes, and Ron Jefferies, a brewer and owner of Jolly Pumpkin Artisan Ales. "A brewer and a biker," Local Stewart laughs, "No wonder Bend made the list." Richard Louv, a San Diego-based author, and Aparna Rajagopal-Durbin, a founding partner of the Avarna Group, rounded out the pool of experts.

The panel was asked to vote for 20 of their favorites with towns that received two mentions or higher advancing up the list. It's unclear what other quantitative criteria was needed to make the cut, but Outside Magazine asked the panel to nominate places that are "Great for kids, have drool-worthy food and drink scenes, are welcoming to people of any background, and have all the bike lanes and singletrack you could possibly want."

"All the bikes lanes you could possible want? Adds bike shop worker Culeston, "have these folks even been to Bend? Our bike lanes are awful and we sorely need more."

True, perhaps the description of Bend as the crowning jewel can be interpreted as a town without faults. Locals may worry it will attract more visitors — or seemingly worse — residents, though Anne Aurand, communications director for the City of Bend, cautions there is no quantitative research showing a correlation of best-of lists and migration patterns.

"I've lived here on and off since 1991," says Aurand, " ... (I) can say that back then in 1991, it was a quieter town and it wasn't mentioned in magazines regularly like it has been in more recent years. It's obvious to say we've been discovered and positive publicity from these respected national magazines has got to put us on more people's radars and make Bend a destination.

"The top-ten lists aren't just unique to multi-sport outdoorsy stuff, although that's clearly what we're best known for. I think there's and long a diverse list of accolades – best small city, best places to retire, have a dog, etc."

Mum's the Word:
It's Not Really Magazines Spilling The Secret...
It's Your Family Members

Sixty-seven percent of visitors say they found out about Bend by word of mouth or a recommendation, according to Visit Bend's research. In conjunction with RRC Associates which conducted a Bend Area Visitor Study in 2015-16, the survey polled 1,053 visitors. Visit Bend says the strong showing of word of mouth advertising indicates "the strength of non-traditional advertising." In contrast, a magazine or newspaper article — such as the Outside Magazine article — accounted for only five percent of marketing. Other factors were a previous visit to Bend at 31 percent, Facebook at seven percent and Trip Advisor at 5 percent.


And all those out-of-state license plates? Yes, it's true, 60 percent of visitors in the winter were from outside of Oregon — namely California and Washington — with 40 percent from within the state (mostly from the Portland and Willamette Valley areas). Together, these three states comprised 79 percent of the visitor base during the winter season, as compared to 69 percent in the summer months. In retrospect, these are the same areas that boast the highest migration of permanent resident patterns to Bend, namely from California, Washington and Portland.

If anything, Bendites can be relieved that word hasn't quite spread past these states and international visitors account for only 2-4 percent of visitors to Bend: most were from either Canada or Australia.

The economy is up, and when it is, people have money to burn. Tourism is rapidly spiking in Bend and in the fourth quarter of 2016, revenue — measured in dollars spent on lodging — is up: way up. According to Visit Bend's research, the average revenue collected from lodging in 2008 was $42.91 per room. In 2016, that number doubled at $80.13, proving people are spending money on being here — nearly $3 million in the fourth-quarter of 2016 alone.

The Central Oregon tourism industry regularly employs more than 15 percent of the workforce in Deschutes County according to the Oregon Employment Department, with many of them hospitality workers who reap the benefits of a growing industry.

Dugan notes the economic dollars collected from the tourism industry help pave roads and increase infrastructure. Municipal laws were created for additional revenue streams with 70 percent of taxes heading to the City. "I think (the revenue streams) are working," says Dugan, "And Visit Bend is trying to invest widely in the community pain points."

One of these investments is increasing marketing toward encouraging better visitor behavior. Dugan points to the "Visit Like a Local" campaign as an initiative that tackles that issue directly. "We want to educate and inform visitors on how to maintain our trails and encourage better behavior. We've heard the community complain about these issues and most certainly it's something we talk a lot about as an organization."

"This place is unique," says Dugan "It's full of people who are passionate and committed to the community. I think people can feel that, they want to be part of something so special and that's why they're choosing to come... not because of a magazine article."