Up at the Lake | Outside Features | Bend | The Source Weekly - Bend, Oregon

Up at the Lake 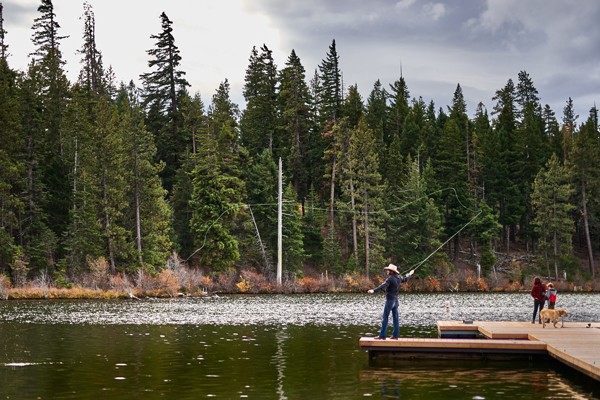 Sunset over the water, a fire popping out sparks, and friends clinking glasses of bubbles. It's an idyllic vibe, characteristic of the everyday experience at The Suttle Lodge & Boathouse. But what's really standing out for me: The dogs.

Little dogs. Big dogs. Fierce dogs and friendly ones, sniffing around in the sand. When you have a dog, you know they can be a headache and a hindrance to the weekend getaway you so badly need. That is, unless you're at a dog-friendly spot such as The Suttle Lodge, nudging Suttle Lake in the Deschutes National Forest west of Black Butte.

"We always hear how happy people are to be able to bring their dogs, and the dogs all look super happy," says Director of Sales Rebekah Bellingham.

The historic lodge—formerly known as the Lodge at Suttle Lake—reopened last August under new ownership. It's long been the site of many a weekend getaway for people from Bend or Portland or other wet spots along the valley floor.

By welcoming my furry friend into the lodge (and the guest rooms and cabins), they've solidified my plans for this particular weekend. And with the upcoming reopening of the Suttle Lodge Boathouse, recently revamped, I have a feeling I won't be the only one to reflect on the welcoming vibe for both humans and canines.

The urban aesthete will probably have heard of Portland's Ace Hotel. The owners of the Ace Hotel's building (technically called the Clyde Hotel building), Robert Sacks and Dave Schrott, bought The Suttle Lodge in October 2015, putting its operations under the direction of The Mighty Union, a hospitality company that runs the Ace Hotel and several hip Portland bars.

Before reopening the Lodge last August, the team spent time revamping the main lodge building, adding a curated record collection (and record player) and the "Skip Bar" serving craft cocktails and bottled wines, and renovating the lakeside cabins. The Boathouse, meanwhile, had experienced flooding prior to the purchase and was not open for several years. After adding a new, larger dock, more patio seating, a beer garden and a new, whitewashed interior, the team is opening the Boathouse once again Memorial Day weekend. 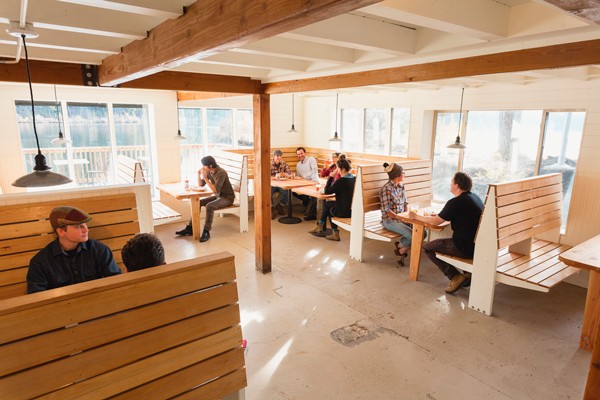 "The boathouse is kind of like our most public space," Bellingham tells me. "It's pretty for a nice day, and of course, sunset."

Other additions to the Boathouse include a fleet of human-powered boats such as paddleboards, canoes and kayaks, a jukebox, a meeting room, a small grocery store with basic provisions, and a pop-up shop from outdoor gear provider Poler. The beer hall outside, meanwhile, offers German beer hall tables, six beers on tap—and in grand Central Oregon style—lawn games. Also new to the area is a set of mountain bike trails near the lodge, going out to the Metolius basin, Bellingham says.

Meals in the Boathouse are casual and include chef Joshua McFadden's fish sandwich, dubbed "the most epic fried fish sandwich" by Bon Appetit. McFadden, the chef at Portland's Ava Gene's, is just one of the chefs who have taken over the main kitchen over the past several months, part of the Lodge's guest chef series. This winter, when I attended the guest chef dinner cooked by Rita You of the former Lucky Strike restaurant in Portland, I was in Sichuan heaven. That program, thankfully for all of us, will continue. Also on tap for the summer are beer tap takeovers and a series of music shows, including Matt Pryor and Dan Andriano this Thursday, May 18.

The good part for visitors who don't have a reservation to stay the night: the Boathouse and lodge is still open to the public, guest or not. That's also the good part for my dog, who isn't going to mind much whether we arrive as daytime visitors or as overnight guests. What he will notice, however, is that he's there in the first place, instead of stuck at home.