By The Source Staff
Tweet
Submit to Reddit
Email
Looking forward to brighter, sunshine days? We are, too—but we're also excited for all the new and returning seasonal brews our talented brew community is gearing up to release! 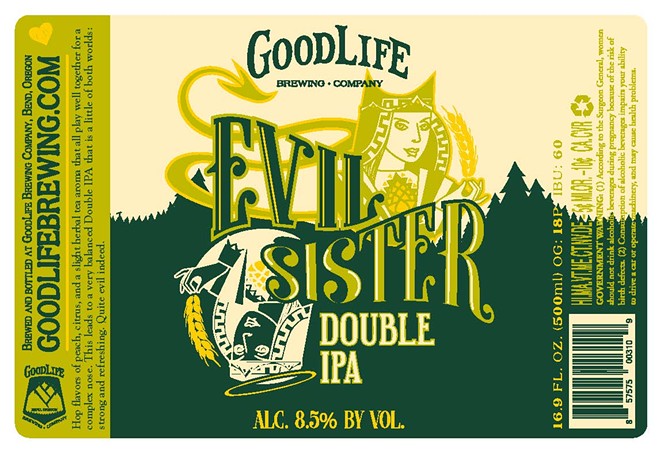 From the Brewers:
Wildland Session Ale is a bright and clear beer that is a golden orange/straw color with a white head. Slightly dank aromas of citrus fruit with some spicy notes in the background. Peach and other bright fruit flavors are at the forefront of a clean finishing beer with medium body. A great summer beer that is dank and easy to drink. (source: goodlifebrewing.com)

This isn't a "seasonal" per se, but it's a damn good beer for the warmer months and they just started canning it this past year.

Available: Now (cans and on tap)

Chemist's Profile:
We took our Belgian Witbier, Shepplekofeggan, and kicked it up a notch! We doubled the IBUs to balance the alcohol and used a myriad of spices, headlined by a four peppercorn blend, accented with fresh orange peel and coriander. The result is a big, yet light bodied Wit with citrus and pear aromas that finishes clean and peppery. (source: Monkless Belgian Ales tap menu)

Available: Now (cans and on tap)

Tasting Notes:
The pursuit of the perfect wave (or beer, for that matter) never ends. But with Play Wave, we’ve crafted a refreshing ride that’ll keep you paddling back out for more. With Mosaic, Galaxy, and Centennial hops added at the tail end, this easy-drinking NW Pale Ale is a tidal wave of citrusy goodness, without the bitter wipeout. Keep chasing your wave, and we’ll keep chasing ours. (source: www.cruxfermentation.com)

Also lookout for their new Lawn Party India Golden Ale set to be tapped this summer.

Tasting Notes:
A jazz artist might declare this funky blend of aged and unaged imperial saisons, as “in the pocket!” An avant garde combo that generates an irresistible groove. Aged in northwest red wine barrels, the elder imperial saison lays down the tart oaky notes in lock step with the wild improv of the younger brett duet. Can you dig it? (Released Apr ’17) (source: www.cruxfermentation.com)

Here is the release schedule:

Silver Moon is also serving a Celtic Stout, "Maeve," to be released on St. Patrick's Day.

Tasting Notes:
A collaboration with Humm Kombucha, a fellow Bend, Oregon, craft pioneer, this unique kombucha radler combines Humm’s tangy grapefruit with the iconic Cascade hops, and Pilsner malt that Deschutes Brewery uses is many of its beers. The finished brew is a crisp and invigorating fresh twist on a radler. (source: Deschutes Brewery)

Also lookout for their new Lawn Party India Golden Ale set to be tapped this summer.

Tasting Notes:
Contained within is a hoppy concoction brewed and dry-hopped with Amarillo, Citra, Mosaic and Chinook Hops, and over 650 pounds of mango puree from Oregon Fruit Products. A powerful medley of bold tropical fruit scents and flavors elevate this Double IPA to a higher plane. (source: McMenamins)

What the brewers are expecting:
A “bisquit-y” flavor and aroma, with some graham cracker notes, paired with the tropical notes from the yeast, adding mango and pineapple notes to the flavor profile. The idea is to create a unique, hoppy table beer.

*"Doyenne" is a woman who is the most respected or prominent person in a particular field.

Available: Last week of March on tap and in bottles.

Tasting notes:
Get ready to have your taste buds dancing with the next up in our sour series, Tarty to the Party Strawberry Lemon Sour Ale! This beer is kettle-soured, with lemons added to the brew to give extra tartness, and strawberries added for sweetness in the beer. These tart and sweet flavors blend well and are prominent in the mouthfeel. Full of flavors from tart to finish, this sour ale is a party you don't want to miss.