When they first started out, Upstate (formerly the Upstate Rubdown) was just kind of kickin' it and making music while in college. The band would play at dive bars, house parties and wherever else they could. While Upstate has seen member changes throughout the years, singer/guitarist Melanie Glenn looks at that as a positive. 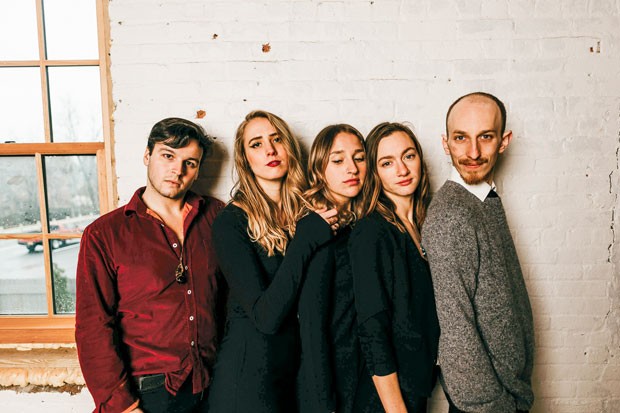 "We just wanted to keep going. We were enjoying writing together," recalls Glenn. "We've changed personnel a lot over the beginning years—and still do. But I think that just adds to our writing ability; working with new people."

The newest member to the lineup is singer Allison Olender, who makes for a killer addition to the trio of voices—which also includes Glenn and Mary Kenney. Upstate uses layers on layers of beautiful harmonies throughout its music. The band's latest album, "Healing," is proof of that.

"We loved her [Allison's] songwriting style and her voice. We were excited to work with her," Glenn says about the addition of Olender. "We kind of hit the ground running. She moved to upstate New York with us and we practiced like full, long hour days for like four or five days before her first show. So, it was a lot. We've definitely grown a lot, as the three of us."

Running for 41 minutes and spanning 11 tracks, the band recorded the album, "Healing," in a total of five days—which, believe it or not, is the longest the band has ever spent recording a project. Upstate's debut album, "A Remedy," only took three days. Through Kickstarter and the support of fans, friends and family, they raised enough cash to be able to rent studio time. Glenn tells me the band prefers to do live takes of its recordings—hopefully getting it down in one shot to really capture the "energy" and "connectivity" as a group.

While Upstate's sound is definitely folk or Americana based, they have a clear pull from a lot of other genres. Glenn credits this to the variety of tastes each songwriter has in the band – like R&B, jazz or even her personal digs: Animal Collective and Hiatus Kaiyote. One of the big standouts off of "Healing" is the Latin-inspired track "Weekend" – which sounds just as fun as the feelings the title might invoke on its own. From there you even get some old school country, modern pop (almost like a toned-down Billie Eilish at times) and more. It's a perfect hodgepodge of sweet tunes that stem from a deep theme.

"'Healing' means a lot to us. We all have so many different ways that we can heal and healing is really hard – as we say in our title track," Glenn says. "Throughout it we speak of different areas of where we've had to heal or where we had troubled times. As well as just referencing the whole gambit of life. It's hard to heal. But we're here and so we will. We have to at least try."

Currently on tour in support of the album's release, Upstate is definitely taking advantage of the opportunity to travel and explore when they can. Recent stops include the Grand Canyon and Area 51, but Bend is something Glenn is stoked for. She even let out a "Yay" over the phone when I confirmed the location of Upstate's show here at McMenamins.

"We mostly do spur-of-the-moment. We always like to look up hot springs. That's always a really good thing – not like the really nice ones, but like free, hole-in-the-ground ones, ya know?" Glenn says of Upstate's touring adventures. "We've never been to Bend. I'm so excited to see that town! Go to a brewery or something, right? Aren't there tons?"

No worries for Upstate there: Bend's definitely got things covered in that department.