V is for Inclusion

Donning colors of pink, red and purple, women of all backgrounds and appearances acted out Eve Ensler's riveting writings at this year's mid-February performances of "The Vagina Monologues", held in both Bend and Madras. Having a performance in a place beyond Bend is just one way the show producers aimed to make it more inclusive. 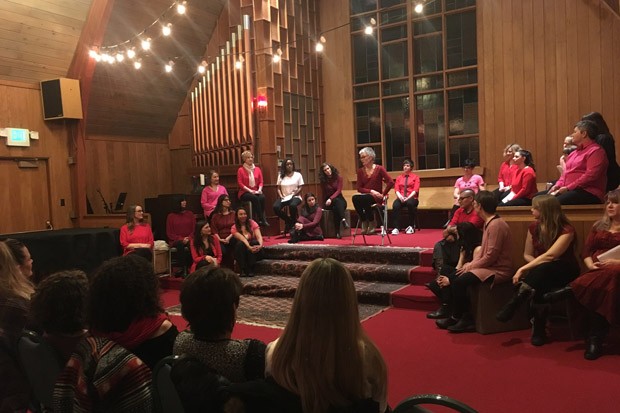 "The Vagina Monologues" have been produced sporadically in Bend, starting in the early 2000s at Central Oregon Community College and again in 2007 and 2009 by Human Dignity Coalition.

Two separate performances happened as part of the V-day Campaign in 2016. The V-Day Campaign can be presented in tandem with "The Vagina Monologues."

According to the V-Day website, "The Vagina Monologues gave birth to V-Day, a global activist movement to end violence against all women and girls (cisgender, transgender and those who hold fluid identities that are subject to gender-based violence)."

Co-producer of this year's local show, Jenni Peskin, echoes that aim, calling it, "an international effort to end sexual violence against women."

For this year's productions, organizers made a big push to broaden the search for cast members. Co-producer Marieka Greene notes, "We knew we had to cast our net wider, do things different... We held auditions in Redmond, Madras and Bend. We hoped this production wouldn't feel so 'Bend-centric' like many Central Oregon events are, especially politically progressive ones."

As a result, Greene feels this year's cast was significantly more inclusive, including individuals from different generations, people who identify as LGBTQ+, people who are gender fluid, parents, black and indigenous women of color and Latinx individuals.

Inclusivity efforts also yielded the incorporation of Spanish into parts of the script. A performance held in Madras (in cooperation with Let's Talk Diversity Coalition), put a spotlight on women who are or have been incarcerated. That performance also highlighted community activists—an effort to move the needle in creating accessibility for all communities in Central Oregon. As Greene states, "Distance and transportation access is an unearned disadvantage for many."

Greene notes that Me Too was originally created by longtime sexual violence advocate, Tarana Burke, in 2006—11 years before Harvey Weinstein's patterns of sexual violence and intimidation were put on blast, and Alyssa Milano moved the #MeToo hashtag to viral status.

This year's V-day Campaign brought into focus the need, nationally and locally, to highlight the voices of historically marginalized populations, and to address the concern that only when powerful white women experience oppression do movements gain momentum.

On that subject, Greene says, "I feel it's important to note that it took 10 or so years for [#Metoo] to gather (white feminist) momentum."

Though locals might want to believe sexual discrimination, oppression or violence isn't present in our idealized high desert utopia, there is sometimes more to Bend-centric culture than meets the eye.

"In my opinion, 'The Vagina Monologues' are about shedding light on the ways individuals are othered, oppressed or devalued," says Greene. "This could be overt, sexually violent oppression, but it might also be sexual, economical or cultural repression. The [Vagina Monologue] stories do focus on women, inequities, sexual orientation, sexual satisfaction or violence and vaginas (or lack-thereof), but the themes can be more broadly applied."

Though this year's round of shows is behind us, co-producer Breyn Hibbs offers the reminder that one in three women on the planet will experience some kind of violence in her lifetime. For this reason, she believes the, "#MeToo movement will continue—regardless of whether this remains its recognizable title, until this statistic is no longer true. Can you imagine what it would be like to live in a world where organizations and movements like V-Day or #MeToo didn't have a need to exist?! Unfortunately, we don't live in such a world. And so, we march on and continue the movement in the ways we can and do, just like the women who have come before us did—sometimes with a particular publicly-recognized banner or hashtag, but more often, via gatherings that nobody else ever knows about except us, and the women we circled with."