Variety is the Spice of "The Cascades 10" | Culture Features | Bend | The Source Weekly - Bend, Oregon

Variety is the Spice of "The Cascades 10"

If variety is what the selection committee was looking for when they gleaned just nine plays from the more than 25 submitted for this year's "Cascades 10" short play festival, then they succeeded in their task. This year's array spans the gamut of genres, from philosophy to farce, situation comedy, relationship dynamics—and a stagehand eating cookies off the floor.

"Three of them were students of mine," says playwright Cricket Daniel, whose "A Ferry Tale" is also part of this year's lineup. Daniel teaches a playwriting class through Cascades Theatrical Company. "We watch them go from idea to a one-page outline, to being a whole 10-minute play, over the course of six weeks." Former students Sara Freedman, Patrick Blute and Gloria Hegidio all have plays in the show. 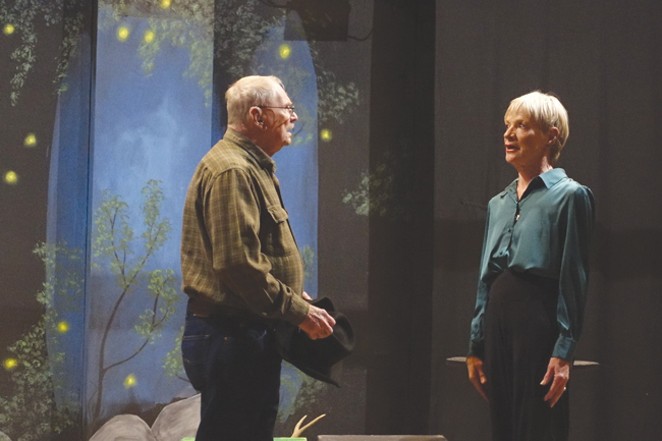 "We try and keep them as minimal production-wise as possible," producer Ramya Hipp says of the criteria for submissions, solicited by mailing lists, social media and word of mouth to Pacific Northwest playwrights each year. The works are all new, never-before-performed and focused on characters and their dynamics rather than an involved story line, she says. "It's pretty half and half as far as comedy and drama... well, maybe a little heavier on the comedy!"

Once the winning plays were selected, a pool of directors could choose their favorites. "Casting all happened in one day and was a lot of fun," Hipp says. "We had around 30 actors to audition. They had some time to prepare, then they were rotated in to perform in front of the nine directors." Once the directors made their top choices, the committee made the final selections.

In one play, siblings argue over an unlikely family heirloom left by a deceased parent. In another, a man and a woman meet on a ferry, but only one of them feels the love. A theater rehearsal is dogged with zany interruptions, and a mysterious agency seeks out speakers of idioms, hunts them down and demands payment – "I'd give my left arm for a trip to Cancun..."

In the opener, "Enjoy the Show," by Annie Tappouni, a nervous volunteer (Emily Cady as Laura) spills on the stage, growing more and more emotional as the rest of the crew tries to lead her to a graceful exit. "Stella and Lucy" (playwright Susan Raley-Salas directing) takes place inside a car, as a newly widowed businesswoman (Teresa Rundle as Stella) is accosted by a stranger with a gun (Cindy Tolces as Lucy).

"From the Top," written and directed by Zachery Ellis, takes the audience backstage to witness the many foibles of bringing a show together. In "Ferry Tales," Professor Faith (Tori Nickels) is dogged by a smitten blog writer (Daniel Witty as Chance). Playwright Daniel says she was on a ferry boat when she got the idea for the play. "I'd never been on a ferry boat before," she says. "I'm looking around at the people from all walks of life and I thought, there's a story there." The short play is actually one scene from a full-length play she's currently working on, in which three separate encounters take place over the course of one 40-minute water commute.

A few of the works have a more serious tone, though each of them involves at least a little comedy. In "It's a Big Universe" by Ron McCracken, a middle-aged woman (Jenny Walker) tries to get a sullen teen (Riker Brewster) to open up as they share a bench in the park. An addict (Peetie McCook as Carl) struggles to make a buy from a new, young dealer (Julian Riker as Lenny) in Blute's "Bad Habits." The absurd "T.I.A.," written and directed by Laura Lee Coffman, is both comical and terrifying: can they really collect an arm and a leg?

“It’s pretty half-and-half as far as comedy and drama… well, maybe a little heavier on the comedy”—Ramya Hipp tweet this

The Cascades 10 is a good way to try out being part of a theatrical production. Synopses for each play are posted online, then group auditions happen all in one day. Once the directors make their choices, a selection committee assigns the roles to match their choices as closely as possible. "Most people got to read from several different scripts, with different partners," says Hipp. "I would recommend signing up for the newsletter to stay up to date on audition calls."

The Cascades 10 show is expected to run about two hours or so, with one intermission after the first five plays. Refreshments will be available in the lobby before the show and during the break.