Attending a concert at the Les Schwab Amphitheater already comes with a few more rules than in years past: Bags only of a certain size, and passing through a metal-detecting wand, to name a few. And this week, yet another requirement: showing proof of vaccination against COVID-19 or a negative COVID test. Central Oregon's largest venue began checking for vaccination status this week, starting with the Modest Mouse show on Aug. 29. In addition, Gov. Kate Brown began requiring mask-wearing in public outdoor settings, including concerts, starting Aug. 27. So far, the new requirements are not slowing down concert-goers' roles. For some, the new requirements were less of an impediment and more of an assurance of added safety.

"We had a handful of refund requests, but heard from just as many folks if not more that they felt more comfortable going to a show now with the new health and safety protocols," Beau Eastes, marketing director for the Les Schwab Ampthitheater and the Old Mill District, told the Source Weekly. Attendance numbers for the Modest Mouse show were, "No different percentage-wise than any of our other shows," Eastes said. 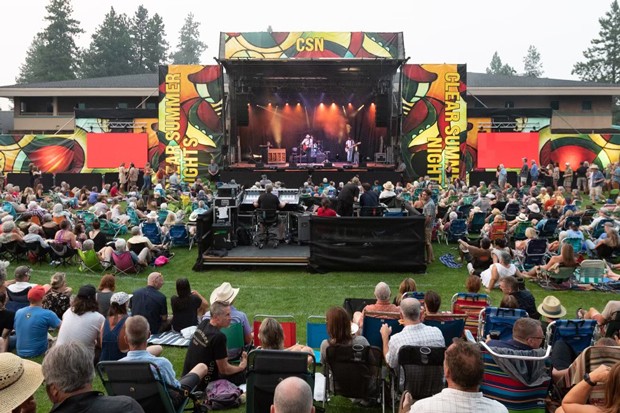 Clear Summer Nights, which hosts a series of concerts at The Athletic Club of Bend, is also enforcing a similar policy, along with offering rapid tests at the venue starting with the Michael Franti show on Sept. 14. It's the first concert series in Central Oregon to offer on-site testing, according to its organizers. Testing is available at The Athletic Club starting three days before each of the remaining concerts in the series.

"This onsite testing takes our ability to do the best by our ticket holders to a new level, and we're proud to offer this free service," Cameron Clark, founder and executive producer of Clear Summer Nights, said in a press release. "The service will be entirely free, billing the insurance companies of those who have proof of insurance (at no cost), and subsidizing those who do not."

The Sisters Folk Festival, happening this year from Oct. 1 to 3, is also requiring proof of vaccination, but won't give attendees the option to get tested in lieu of a vaccination card. Its announcement, released Aug. 18, was intended to give participants "ample time to receive vaccination for full immunity before the folk festival, a process that takes from two to six weeks." Ticket holders could request refunds before Sept. 1 if they opted not to participate under those terms.

At the Les Schwab Amphitheater, the additional vaccine-card or testing requirement involved passing through a COVID-compliance table before the now-usual bag check table—a process that added a few minutes to the check-in process, and requires more staffing and organization. For some venues, that—and the ongoing presence of the Delta variant in the community—were too much to remain operational. Volcanic Theatre Pub, the indoor venue on Bend's west side, announced Aug. 24 that it would close for at least two weeks, and until further notice, due to the current spike in COVID cases in Deschutes County.

"For the safety of the community, our staff, and healthcare providers, we absolutely must make this decision do our part to stop the spread of this virus," Volcanic shared in a press release. "Refunds have been issued to all shows set to occur during the closure."