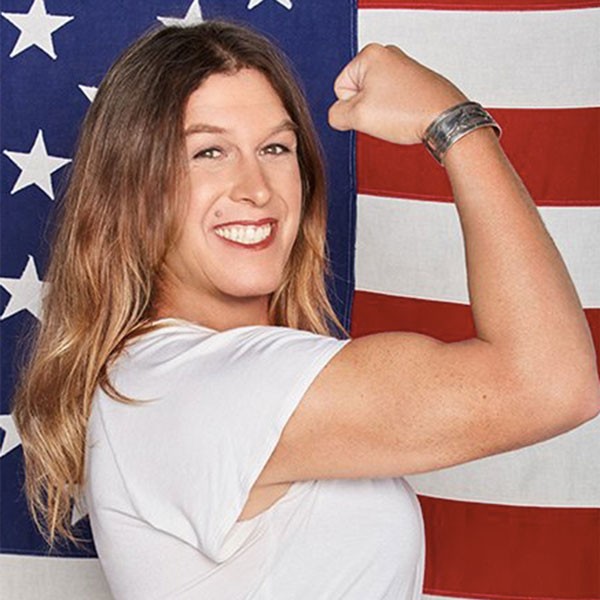 What's the difference between an advocate and an activist? According to veteran and LGBTQ activist, Kristin Beck, there are, "three ways to make change: protesting, activism and advocating. Protesting is super aggressive. You piss people off, which makes lines of communication shut down. Activism is lighter on the protesting. If you aren't as hardcore, you can better convey solutions."

When Beck calls for change regarding the U.S. military's LGBTQ policy (and beyond), it comes from 20 years with the U.S. Navy SEALs. After 13 deployments—seven in combat—stints on the U.S. Naval Special Warfare Development Group and SEAL Team Six, a Bronze Star, two Defense Meritorious Service medals and a Purple Heart, her perspectives are informed.

Beck feels the current transgender military policy—changed to exclude transgender individuals under the current administration—will only allow a small margin of the 15,000+ identifying individuals to continue to serve. Beck, who served in the military under the name Christopher Beck, came out publicly about her transition in 2013, just a year and a half after retiring.

"With national recruiting quotas already being missed, it doesn't make sense to dismiss professional soldiers (pilots, special operations, info technology, etc.) who are already qualified. This would be grossly neglectful on the part of the Whitehouse and Pentagon," Beck says. You may have seen her express these views on CNN.

"Two Spirit" is a term used by some First Nation Tribes to describe having the spirit of both a male and female. "I would rather be labeled two spirit than transgender. Indigenous, pagan... the old ways were much more open-minded, closer to the earth and grounded in spirituality rather than the religion itself. Hinduism and Buddhism are good examples of this, too," Beck said.

Beck describes the model soldier that the military bases its training and recruiting on as "Conan the Barbarian meets Hercules."

"This is a figment, a fantasy. On military ships right now, we don't need Conans, I want Bill Gates who might be 90 pounds. Or females, with attention to reading micro-gestures."

With a shift in the current Conan model, Beck also sees the development of a non-combat uniformed military branch. At the moment, enormous resources are spent on training rifle soldiers, she says. In Beck's re-imagined military, those resources could be better spent strategically. She notes, "In modern warfare there are a lot of people who don't need to learn how to use a gun." She cites operating drones as one example.


"I would rather be labeled two spirit than transgender. Indigenous, pagan... the old ways were much more open-minded, closer to the earth and grounded in spirituality rather than the religion itself." —Kristin Beck tweet this

In the documentary filmed about Beck's life, "Lady Valor," the oppression she's experienced is clear. Beck points to those who have experienced oppression, suffering and discrimination as some of most valuable individuals to harness for the military. "I have experienced it, I know what it looks like, and I will correct it. If we have more females, African Americans, LGBTQs serving, the government and military will have to change." The Bend screening of a film about Beck is just one of two events she'll take part in this week.

Although Beck worked closely with the director and liked the process of making "Lady Valor," she says she would have made different stylistic choices. "With some of the clothing I was wearing, I wish I was wearing something different. I was still a teenager then. I wear more skinny jeans and sweater dresses now. That's the thing about trans— learning about makeup and clothes in your 40s." Beck explains its common for transgender folks to experience their teens in a rushed six months (give or take) when they start transitioning.

Spoiler alert! Since the documentary was filmed, a few things have changed in Beck's life. Now she lives with her wife in Maryland where they raise Angus cattle and keep horses and chickens. Beck's wife is an active duty Air Force member. The couple met at a happy hour while working at the Pentagon.

Ahead of her visit to Bend, I asked if she had visited Oregon before. "I have, and I liked it!" Beck said. "Cool state. Keep Portland weird, right? I like people that think out of the box, ideas people aren't used to yet."

Just think, back in the 1800s people protested the automobile. They said, where is your horse! But now, when you see people with horses and buggies, that is weird."