Back to Basics for NW Fruit-Obsessed Brandy Distiller

After studying abroad, Stephen McCarthy had a dream of making some of the products he tasted in Europe—like poire Williams (pear brandy)—in the U.S. He founded Clear Creek Distillery in 1985 and brought the brandy culture to the States. 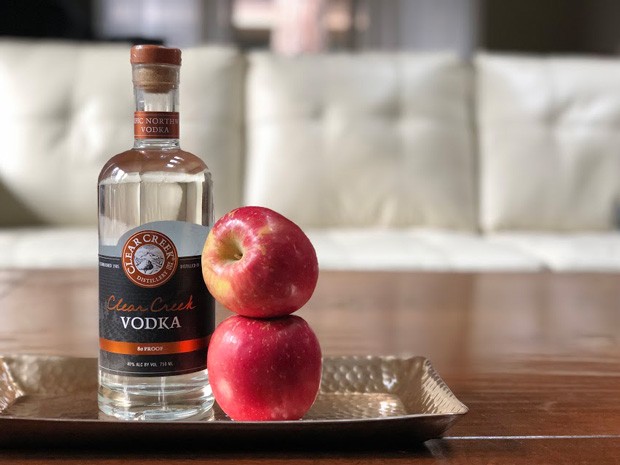 A craft distillery—maybe among the first, as we've seen craft spirits come of age—they bottle over 20 spirits, including the pear-in-the-bottle pear brandy. If you were wondering how this magic happens, the distillers tie a bottle to a budding pear in the branches of a tree until the pear is big enough to harvest, then fill the bottle with clear pear brandy.

After years of making fruit brandies and liqueurs, Clear Creek Distillery decided to distill vodka after moving its operations from Portland to the orchards of Hood River, and its parent company, Hood River Distillers, bought them a new column still.

"It was a while before we could come up with a product worthy of the Clear Creek name," said National Marketing Manager Jeanine Racht.

If making vodka from apples sounds different, it's not. Vodka can be made with any plant matter high in starch or sugar. Most vodkas on the market today are made from corn, rye, wheat or sorghum. It's also the norm for distilleries to purchase neutral grain spirit, a high-proof non-flavored alcohol typically produced from a mix of grains to make vodka.

Racht says the vodka market is "saturated with subpar product." She said Clear Creek Distillery vodka is "for people that care about what they put in their mouth."

According to Clear Creek, they sustainably source from local farmers because they want to put money back into their community.

It's important to note that although Clear Creek Distillery vodka is made from apples, it isn't apple flavored.

Racht said depending what you make the vodka with, the flavor comes across a bit.

"The essence of a crushed apple blossom, it's not sweet or Christmas spices, but it has a tartness," Racht said. "Because it's not fruity you can still make a dirty martini with it."

Since vodka made from apples isn't common, I pressed Racht to explain the innovation coming from Clear Creek Distillery.

"We're not trying to change the world, we're very proud that each product we make has an ancestor," Racht said. "It's tied to history and we're lucky to use our valuable resources."

Those resources are the lush fruits coming from local orchards and the fresh water springs of Mount Hood.