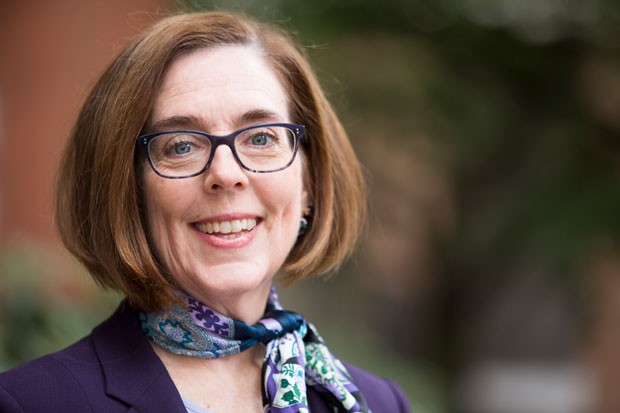 Central Oregon voters have a tough choice in a surprisingly competitive race for governor. Republican challenger Rep. Knute Buehler is a local who would bring welcome attention to the needs of Oregonians outside the Willamette Valley. Independent candidate Patrick Starnes, the third major party candidate on the ballot—who we interviewed during the primary, lacks experience and does not merit more than cursory consideration. Democratic incumbent Gov. Kate Brown, however, has a strong track record and a chance to make progress on crucial issues facing the region and state. She deserves another term.

Recall that Brown was unexpectedly promoted to the governor's job after Gov. John Kitzhaber resigned. She quickly got her feet under her and began to take on crucial issues for Oregon.

The Public Employees Retirement System's unfunded liability looms as a major obstacle to the state's fiscal health. Schools have underperformed. The foster care system has systemic problems. Affordable and workforce housing are in short supply.

Buehler and his supporters lay all of those challenges at Brown's feet, but they were decades in the making. To expect Brown to have turned them around in three and a half years is unreasonable. The fact that so many people continue to move to Oregon indicates that the state is not doing as poorly as her critics contend.

Brown might not be flashy or boisterous, but she brings stakeholders to the table and gets things done. Nowhere was that more evident than in the $5 billion transportation plan that she shepherded through the Legislature with bipartisan support. Bend and Central Oregon will receive millions for local infrastructure and maintenance as well as funding for the Cooley Road-Highway 97 intersection improvements.

Brown might not be flashy or boisterous, but she brings stakeholders to the table and gets things done. Nowhere was that more evident than in the $5 billion transportation plan that she shepherded through the Legislature with bipartisan support. tweet this

On PERS, Brown certainly could and should more aggressively negotiate with public employee unions. But she has made progress. She worked with lawmakers this year to pass a bill that would establish funds to help schools and other public employers meet their pension obligations. That idea emerged from a PERS taskforce Brown had created.

She also has worked with the Legislature to increase funding for schools and has put forward an attainable reform plan for the next four years.

Brown's effectiveness and collaborative approach will serve the state well, especially given that the next governor must work with a Democratic Legislature. Many of Buehler's proposals would be nonstarters with lawmakers.

Oregonians saw this dynamic this year with foster care reform. Buehler stood up at the start of the session grandstanding. Brown skipped the limelight and convinced lawmakers to approve $14.5 million for more caseworkers and staff.

Brown also has a smarter approach to land use. She would respect Oregon's urban growth boundaries by encouraging denser development, growing up instead of out. Buehler has his eye on farm land and sprawl.

And Brown's position on taxes reflects Oregon's needs. Corporations are not paying their fair share, and the state cannot cut its way to success.

Despite all that, recommending Brown was a close call for our editorial board. Buehler offers much to like.

Contrary to the narrative Brown's supporters are pushing, Buehler is no Trumpian Republican. He is a moderate in the mold of former Central Oregon senator and secretary of state Ben Westlund. Indeed, Buehler might be a Democrat in many red states. He is pro-choice, believes in climate change and has called out Trump on several issues, including the choice of Brett Kavanaugh.

He understands the needs of Central Oregon better than Brown. When we asked Brown about differences between Central Oregon and the Willamette Valley, she said, "Generally speaking, we care about the same things." She then fell back on talking points about statewide issues, demonstrating a shallow understanding of the region's priorities. The fact that she wouldn't come across the mountains for a debate also was telling.

For example, the candidates differ starkly on the future of Oregon State University's Cascades Campus. Buehler, who has been a consistent and strong supporter of the campus, would elevate it to equal footing with the state's other universities. Brown would keep the school a lesser branch campus.

Yet Buehler tends to try to be whatever he believes an audience wants him to be. When asked during a debate about vaccines, he noted that as a doctor he believes in their value, but he'd also let anti-vaxxer parents opt their kids out for any reason. Likewise, he supports Measure 105, which would repeal Oregon's sanctuary state law, but then in front of other audiences he articulates a vision of protecting immigrants that sounds just like the current law. If politics is in part the art of taking principled stands, Buehler is doing the splits.

Central Oregonians might want to see one of their own in the governor's mansion, but it's not the right time, and Buehler isn't the right candidate. Re-elect Brown to ensure that Oregon continues to make progress.