Waif Watchers You Had Me At Hell | Advice & Fun | Bend | The Source Weekly - Bend, Oregon

Waif Watchers You Had Me At Hell 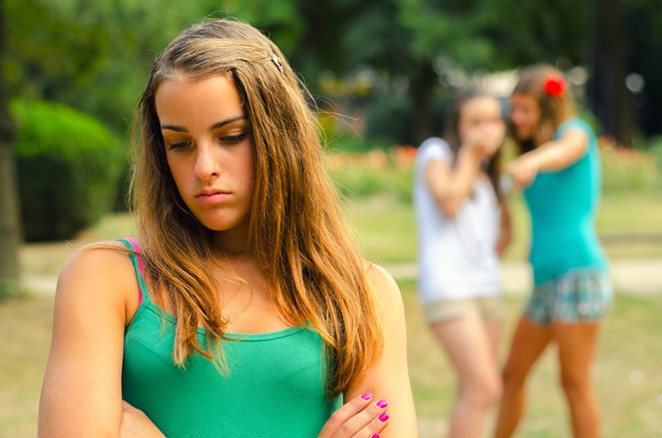 I'm a 33-year-old woman, and I've always been thin. I lost about 12 pounds after a tough breakup. I'm working on getting back to a healthier weight. However, people keep making cutting remarks about how thin I look. Yesterday a friend said, "You're so skinny it's gross!" I'd noticed that she'd gained quite a bit of weight, but I didn't say anything...because that would be rude! She made other digs about my weight, and upon hugging me goodbye, she said, "Eww, is that your shoulder bone?!" What's with this double standard? There'd be hell to pay if I said the slightest thing about anyone's weight gain.

—Tempted To Lash Back

It is more taboo than ever to make cracks about a woman's weight—that is, unless she doesn't have a whole lot of it. Then it's open season: "Wow, what happened to you? Forget where the supermarket is?"

However, it probably is not "people" but "people who are female" who are thin-shaming you. Welcome to female intrasexual competition—competition between women—which is covert and sneaky (and thus poisonous) in a way male-on-male competition is not. Men, who evolved to be the warriors and protectors of the species, tend to be openly aggressive. A guy will give another guy a beat-down or publicly dis him: "Yeah, bro, sure you can get a chick to go home with you—if you've got five grand for a sex robot."

Psychologist Tracy Vaillancourt explains that women seem to have evolved to avoid physical confrontations (and in-your-face verbal attacks that can lead to them), which jeopardize a woman's ability to have children or fulfill her function as an infant's principal caregiver and meal provider. Women instead engage in "indirect aggression" to "reduce the mate value of a rival," like by "disparaging the competitor's appearance ... or using derisive body and facial gestures to make the rival feel badly about herself and thus less willing to compete." (Yeah, that's right. It seems "Mean Girls" was a documentary.)

The tricky thing about these indirect attacks is the plausible deniability they confer. Call a woman out for thin-shaming you and she's likely to duck behind "I'm just worried about your health!" So instead, simply tell her that remarks about your weight hurt your feelings. Speaking up like this says that you aren't likely to let any future digs slide, yet you remain on moral high ground—instead of giving back in kind: "Wow, looks like you've been exercising a lot. Do you do the backstroke in frosting?"

I'm a married gay man, and I hate my in-laws. They were disgustingly abusive to my husband when he was a child. They're in failing health now, and it's important to him to visit them a couple of times a year. How do I get through these mandatory trips?

It's probably tempting to buy his family the sort of classic furniture you think they deserve. Unfortunately, they only ship that model of chair to prisons with a death row.

There is actually opportunity within this biannual awfulness you two have to go through. In the movies, people show their love through grand gestures: "We'll always have Paris!" In real life, according to psychologist John Gottman's research, the strongest, happiest relationships are made up of constant mundane little loving interactions: "You were so sweet to me in Costco."

Gottman finds that the key determinant in whether a relationship succeeds or fails is the ability to trust one's partner. This means not just trusting that they won't cheat but trusting that they'll continually make you and your needs a priority, on a moment-by-moment basis. For example, as Gottman puts it: "Can I trust you to be there and listen to me when I'm upset? ... To choose me over your mother, over your friends? ... To help with things in the house? To really be involved with our children?"

So, though you can't undo the past, when you're on one of these visits, you can shift your focus from hating your in-laws to showing your love for your husband. Listen. Tell him, "I know this is really hard for you." Hug him. Rub his feet. Once you're out of the inlaw inferno, you might discuss trying to make a habit of this sort of thing—really being present for each other in the numerous "unimportant" moments of life.

This will keep you from being one of those couples frantically trying to plug gaping holes in their relationship with extravagant gestures. Typically, these are ultimately futile—too little, too late—and tend to not come off as planned. For example, if you're having 150 doves released over you as you renew your vows, you'd better see that they're all wearing tiny gold lamé diapers.