Chapter One, part one in our excerpted "serial" of Ellen Waterston's forthcoming book


First of all, it’s “Orygun,” not “Orahgone.” And it’s “Malhyure” out here. Not the French pronunciation “Mal-uhr,” although the French trappers who came through Oregon’s high desert in 1819 were plenty unhappy. Once they left the stands of ponderosa in the mountains and entered the desert, nothing went right. Their cached beaver pelts were snatched by Indians. There was little water, no shelter, no shade. It didn’t go much better for the Hawaiian trappers working for the North West Company who came up missing the same year in the farthest southeastern corner of the Oregon Territory and after whom the stunningly beautiful Owyhee River and Canyonlands were named, that being the standard spelling of Hawaii at the time. 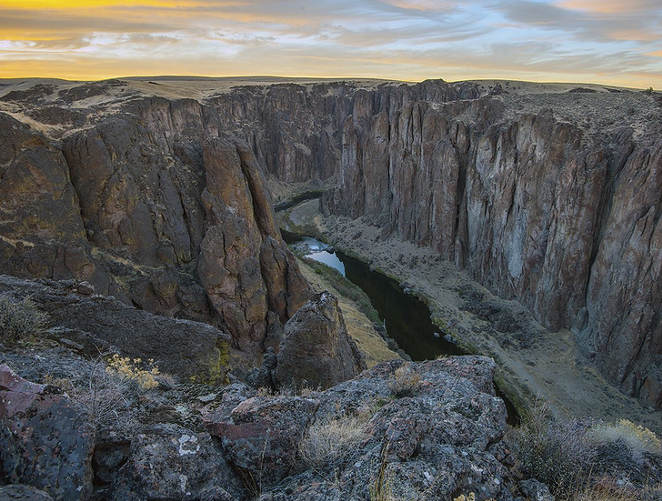 Speaking of names, the Oregon Outback, the sage steppe, the empty quarter, the cold desert, the back of beyond, cowboy country, the nothing-but-nothing, the sagebrush ocean, the Great Basin, the great sandy desert, the rolling sage plain, the Artemisia desert all refer to the same thing: the high desert. Since the nineteenth century, us settlers have tried to name this place and thereby, as is the fancy of settlers, to lay claim to it. But the enduring fascination of the high desert, and the reason its survival as a wild place is within reach, may well lie in the fact that this vast open can’t quite be named. It stays always one step ahead of the namers, luring us who would try deeper and deeper into its embrace.

People start to channel their inner Carlos Castaneda after spending time in this high desert. They also get real. That a rancher hangs a coyote hide on a fence doesn’t mean the rancher is angry at the government, as environmental historian Nancy Langston speculated in a January 6, 2016, New York Times op-ed. It means the rancher is angry at the coyote. Sometimes a cigar is just a cigar. The coyote ate the rancher’s newborn livestock. “Makes a person mad,” states a rancher in typically understated fashion. The only indication of a stronger emotion: the force behind the spit of chewing tobacco he sends to the ground. As far as the rancher is concerned, the dead coyote draped over the barbed wire fence murdered, robbed, and ate a hole in his wallet.

This brief pronunciation and cultural sensitivity guide matters. Simply stated, we must remove our cultural and class filters to have the necessary conversation about this place and about all the people who love it in their unique and seemingly incompatible ways.
It's only a matter of driving a short distance east until I am reunited with what has become my reassurance that all is right with the world: vast sagebrush flats, the echo of what used to be ocean bottom, flanked by escarpments and buttes, gnarled juniper forests, basalt canyons carved by ancient rivers. tweet this

Those who have never been to Oregon imagine the whole state rainy and green, like Portland or Seattle, and believe that the Portlandia culture made popular by the sketch comedy television series characterizes all of the ninety-eight thousand square miles of this northwestern wonderland. In fact, three-quarters of the state is dry and separated from “the valley,” as the western portion is referred to, by the majestic High Cascades, all dormant volcanoes, at least for now. They block the rains from coming east, keep the high desert the high desert. Where I live, in Bend, at the foot of the Cascades on the eastern side, the average annual rainfall is twelve inches a year. As one old-timer said: “Remember that time it rained forty days and forty nights? We got an inch and a half in eastern Oregon.” It’s a part of the world where evaporation exceeds precipitation literally and metaphorically, giving back more than it receives. It’s a desert that doesn’t get the credit it deserves for its generosity.

In April of 2016 I drove the 130 miles east and south from Bend, located roughly in the middle of the state, to Burns to take part in the annual Harney County Migratory Bird Festival, a favorite event of mine. So good to get away from Bend’s increasingly California- like culture. A former lumber mill town, Bend is now ultrachic, latte’d, churning with construction and growth, and teeming with self-aware forty-something bio- and high-tech CEOs. One of the fastest-growing communities in the United States, it boasts a populace remarkably unaware of the desert that surrounds them. Perhaps that’s good news for the high desert.

Lucky for me it’s only a matter of driving a short distance east until I am reunited with what has become my reassurance that all is right with the world: vast sagebrush flats, the echo of what used to be ocean bottom, flanked by escarpments and buttes, gnarled juniper forests, basalt canyons carved by ancient rivers. Other than power lines, and perhaps the distant silhouette of a barn or ranch house, nothing interrupts the view. Along Highway 20 between Bend and Burns, if you stop by the side of the road in the spring, the loudest sound is likely the buzzing of a fly. Artist Robert Dahl, who serves on the advisory council of Bend’s High Desert Museum, once placed a cheesy aluminum folding chair with nylon webbing in the middle of Highway 20 and sat down for the ultimate selfie and existential Christmas card: nothingness ahead, nothingness on either side, nothing to recommend going in any direction . . . or not to.

Closer to Burns the palette changes from the muted browns, grays, and ochres of the sage to bright green, evidence of spring melt and a water table that sits just below the surface of the miles and miles of pancake-flat fields. Dramatically framing them to the west is the 9,733-foot, snowcapped Steens Mountain, its southernmost side a dramatic escarpment that plummets to the Alvord Desert before sliding into base in Nevada. Ranch houses in Burns that are built on these seasonally soggy paddy flats don’t have basements. Abandoned homesteads and barns shrug their way to the earth as their underpinnings rot. The spring runoff in this landlocked basin creates perfect habitat for birds . . . and the word has spread.

The area is part of the migratory path for a huge variety of large- and small-winged victories. Birders with binoculars cruise along the dykes that frame fields of hay, alfalfa, and Timothy grass training their eyes on yellow-headed blackbirds, bitterns, meadowlarks, mergansers, egrets, and willets. Visitors learn to return the favor of an index finger lifted off the steering wheel by the rancher as they pass his oncoming pickup, his stock dog leaning into the wind teetering on bales of hay stacked in the bed of the truck. It feels like acceptance into the fraternity of those who work the land for a living. It used to be most of us could recall a relative who farmed or ranched. Not so much anymore.

What started in 1981 in the town’s grange hall, the Harney County Migratory Bird Festival now locates activities all over Burns and at favorite viewpoints within the 187,000 acres of the Malheur National Wildlife Refuge, with bird talks and guided tours held within the refuge and on adjacent ranches. You’re likely to see flocks of snow geese lifting off the greening meadows like bedsheets flapping in the wind, clusters of avocets and phalaropes probing the marshes and irrigated fields for food, squadrons of haughty white pelicans and sandhill cranes looking as regal and prehistoric as they are, their ungainly squawk matching their ungainly stride. What people come to observe and exalt is beautiful, glorious, fragile.

On the Saturday night of the festival a dinner is held at the Harney County Fairgrounds. In 2016 there looked to be two hundred people in attendance. More? In any case, a record-breaking turnout, according to organizers. Long banquet tables were decorated with rough-hewn barnwood boxes made by local high school students and filled with wildflowers. Crude paintings of birds, also by students, were on display to be auctioned as well as raffle items, from carved ducks to horsehair bracelets to homemade apple butter crafted by local artists and cooks. The gregarious organizer, president of the Burns Chamber of Commerce (considering all the empty storefronts in town, a triumph of hope) orchestrated the evening skillfully as she called out raffle winners and introduced speakers. The dinner was prepared by members of the local Mennonite community. Between the main course and dessert the Mennonite men and boys in their pressed white shirts, the women and girls in their long skirts and small bonnets came out of the kitchen and lined up next to the toiling coffee pots to sing in the purest of harmonies: “When hay is fresh and new, all my praise to You. When hay is fresh and new, all my praise to You.”

But no matter. No one was inclined to take issue with anything tonight. Nope. If the noisy chatter was any indication, the crowd was clearly eager for a time-out from recent controversies, a night out. Strangers introduced themselves to tablemates, ranchers and visitors applauded anything and everything, knocking their water glasses on to the decorative paper doilies, into their whipped cream and fruit salad. A good time.

-Ellen Waterston's new book is out in June 2020. Stay tuned next week for the second part of Chapter One.


See more on "Walking the High Desert" from the University of Washington Press: