Project to protect wildlife passage across Hwy. 97 sees a reduction in collisions between vehicles and animals 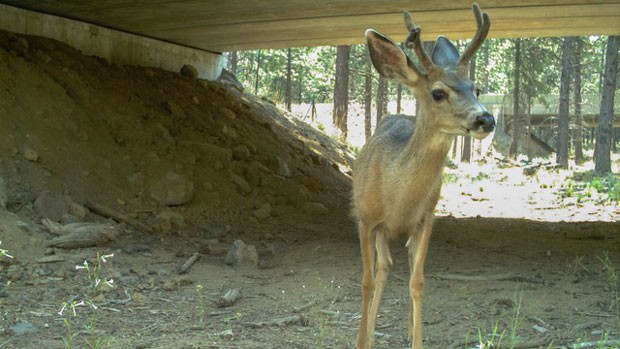 Many Central Oregon drivers fall into two categories: those who have hit mule deer and those who know someone who has. Fortunately for both deer and driver, a 4-mile section along Hwy. 97 south of Lava Butte now provides both with safe passage.

In June 2012, the Oregon Department of Transportation completed the Lava Butte US 97 project, an $18.9 million highway upgrade. The project included dividing and widening the highway, rerouting southbound traffic exiting the Lava Lands Visitor Center, installing wildlife fencing, six electro-mats at on and off ramps, and building two bridges—one of which was the first dedicated wildlife crossing structure in Oregon. Roughly $3 million was spent to mitigate the widening of the highway.

Since the project's completion, ODOT has seen an 85 percent reduction in wildlife and vehicle collisions within the area.

"The wildlife crossing between Lava Butte and Sunriver is very important for mule deer and elk because these species, especially mule deer, move from summer to winter range and need to cross the highway," said Lauri Turner, Deschutes National Forest wildlife biologist. "Before the structure was constructed, we had lost most of the deer that had historically used this path and the "knowledge" of moving through this area was virtually lost for a while."

Prior to construction, from 2005 to 2010, the Oregon Department of Fish and Wildlife radio-collared 65 deer to track the animals' seasonal movements and to try to understand where the animals were crossing or dying along a 100-mile stretch of Hwy. 97 and along 50 miles of Highway 31. The deer crossed in a "sheetflow" pattern, meaning there wasn't a single location where the animals crossed the highway.

"There were about seven deer/vehicle collisions on the stretch of highway in the project area on average each year," said Cidney Bowman, ODOT wildlife passage coordinator. "A national statistic used to determine the cost of a wildlife/vehicle collision is $6,617 for mule deer and $17,483 for elk." The financial benefit will easily outpace the upfront costs in years to come.

The northern underpass near Lava Butte accommodates both animals and vehicle traffic and has an extra "lane—really just a dirt shelf that has vegetation, logs, and boulders for smaller wildlife to use. Trail cameras have documented 40 species including deer, coyotes, black bear, bobcats and small mammals using the underpasses.

In addition to the underpass, 8-foot tall fencing runs parallel along the highway and funnels wildlife to the crossings. "Without the fences, the crossings would not be as effective," said Suzanne Linford, founder of Protect Animal Migration, a local organization dedicated to "barrier free migration for deer and elk," according to its website.

"These structures are going to have to be in place for several years before that migratory path will be established," said Sara Gregory, ODFW wildlife biologist. "A really cool thing about mule deer is that over 90 percent of them follow the exact same path going from winter to summer range and summer back to winter."

"Folks forget these mitigation measures are very costly," said Turner. "If Oregonians want to see their wildlife resources maintained over time, it would be great for them to let their elected officials know about that so that wildlife crossings are a consideration for every new project that arises."

With increased traffic on Highway 97 and future ODOT projects in the pipeline, maintainingconnectivity between ranges is critical for the survival of mule deer in Central Oregon. Efforts to secure funding for adding fencing to another wildlife underpass planned in the Gilchrist area is underway.

"OHA has donated over $90,000 towards this project," said Brown. OHA, ODFW, ODOT, USFS, PAM and other groups are working to protect wildlife and people traveling through Central Oregon. To learn more about wildlife passage, visit protectanimalmigration.com.