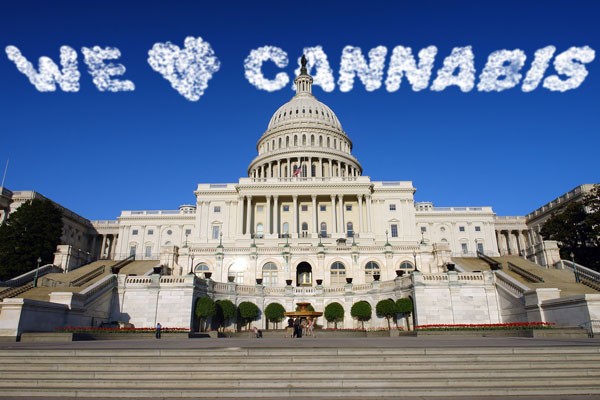 I've been asked many times in the last couple weeks if all the recent national-level political activity around cannabis means that the prohibitionist dam is about to burst, and de-schedulization is around the corner.

There are certainly numerous things that could lead to that conclusion. While you've been getting high (on regulated and taxed cannabis products from an independently owned dispensary, I hope), this is what's been going down:

John Boehner has come on board as an advisor to Acreage Holdings, which grows and sells cannabis in 11 states, and will soon be on its board of directors. He claims his change of heart came about because of his concern for veterans and the opioid crisis. Bless his heart if that's the truth, but I think it's more concern for his net worth. But he is the highest-level prohibitionist to switch sides, so welcome, John, you (in all probability) two-faced lying, crapweasel.

Southern Mayonnaise Turtle and Senate Majority Leader Mitch McConnell, R-Ky., introduced The Hemp Farming Act of 2018, legislation to make hemp a regulated agricultural product. Jobs and the associated money are the stated reason for his support. He quickly gained support across the aisle, and presently has seven co-sponsors.

Sen. Chuck Schumer, D-N.Y., announced plans to introduce a bill to decriminalize cannabis at the federal level. It wouldn't legalize marijuana outright, but instead allow states to decide whether to make the drug available commercially. The legislation would also maintain federal authority to regulate marijuana advertising in the same way it does alcohol and tobacco advertising. The aim, Schumer said, is to ensure that marijuana businesses aren't allowed to target children in their advertisements

"We should hope for the best, but not take anything for granted," he said. "Trump changes his mind constantly, and Republican leadership is still in our way." —Earl Blumenauer tweet this

The racist, homophobic and misogynist orange tumor we have as our president announced a deal with Sen. Cory Gardner, R-Colo. Gardner "received a commitment from the President that the Department of Justice's rescission of the Cole memo will not impact Colorado's legal marijuana industry. Furthermore, President Trump has assured me that he will support a federalism-based legislative solution to fix this states' rights issue once and for all," Gardner wrote in a statement.

Rep. Earl Blumenauer, D-Ore., delivered his "Cannabis State of The Union" on 4/20, in which he optimistically said, "There's no reason we cannot see spectacular results if we all do our job in the next 18 months." He founded the bipartisan Congressional Cannabis Caucus in 2017, so if anyone has their finger on the pulse of congressional action on cannabis, it's him.

All of these are positive, but I'm not breaking out the cannabis-infused champagne just yet. One, because that's not an actual thing yet, and two, because we should consider the sources, starting with Trump.

This deal to basically put back in place some variation of the Cole Memorandum that U.S. Attorney General Jeff Sessions gutted is being made thanks to Gardner stating, "Because of these commitments, I have informed the Administration that I will be lifting my remaining holds on Department of Justice nominees." So the move on Trump's part isn't benevolence or progressive thinking—two things he can't spell, nor has yet to demonstrate in any other legislative action. And don't be surprised if many of those DOJ nominees end up having a contrary view about states' rights regarding cannabis. Even Blumenauer weighed in on Gardner's move, saying, "We should hope for the best, but not take anything for granted," he said. "Trump changes his mind constantly, and Republican leadership is still in our way."

I also have my doubts that what a Republican-controlled House and Senate would view as a sensible cannabis legalization program is in line with what many in the industry would seek. Support of craft cannabis, expanding medical access and addressing the crimes perpetrated on communities of color during the Drug War is not a checklist I see the GOP rushing to advance. Rather, it's about the money, honey, and as with all things Republican-driven, making sure rich white men maintain or increase their financial status quo.

We all want change, but should remain vigilant in what form that change is presented, or decriminalization is going to look much different from what we would seek.