Those living in Bend can soon put their leftover food, meat and coffee grounds in with their yard debris for trash pickup—a move that comes as Deschutes County completes a planning process aimed at managing the growing region's waste. 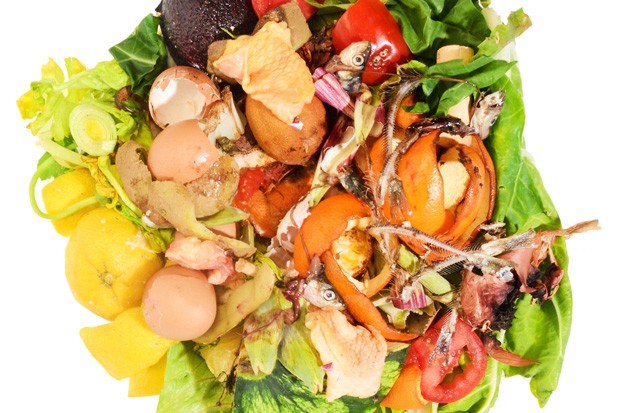 The optional yard debris service through garbage collection by Cascade Disposal and Bend Garbage & Recycling at homes in Bend has long included raw vegetables. It will expand Oct. 1 to take bread, bones and other food waste.


The change follows a successful pilot program involving 600 customers, said Susan Baker, municipal manager at Bend Garbage & Recycling, now Republic Services. The current pickup schedule of every other week will continue, along with the current cost of $4.90 per month with a yearly yard debris subscription. Participants can pick up a free 2-gallon kitchen pail at the two companies' offices in Bend and use it to store scraps that can go into a home's yard debris cart. The collected material will be processed into compost.

"It's just been a natural progression," Baker said. It also aligns with ideas in recent county and city plan proposals, she noted.

Efforts are underway to target the area's future trash. The Bend City Council will soon consider a broad climate action plan that includes a section on waste, calling to recover more food waste, develop recycling and composting programs at multi-family homes, and aim a recycling program at tourists.

Deschutes County is currently considering a big draft plan of its own, meant as a roadmap for the next 20 years of managing the region's waste. County commissioners were expected to vote on it last week but are continuing to review it. The Deschutes County Solid Waste Management Plan reviews collection, disposal, recycling, and waste reduction. It also gives recommendations and prioritizes getting a new disposal system in place in the county—with the expectation that Knott Landfill Recycling and Transfer Facility in Bend will reach capacity within 10 years.

In Oregon, counties and cities must provide services to manage waste. Deschutes County does this through its Department of Solid Waste that oversees services and operates facilities. Revenue to operate the system comes through fees that customers pay, rather than general tax revenue.

The department operates four rural transfer stations and the county landfill, Knott Landfill. Bend, Redmond, Sisters and La Pine provide collections services in their jurisdictions through four private companies with franchise agreements. Each jurisdiction sets the service standards and rates. The landfill takes all waste from franchise collection companies and transfer stations that can't be recycled.

Over about the past year and a half, the Department of Solid Waste, a retained consultant team and an advisory committee of county-appointed members—representatives of waste haulers, cities and environment and community organizations—have worked to craft the comprehensive waste management plan. The process included public meetings, a webpage with the plan and public surveys for input.

The plan recommends a mix of strategies that help to first reduce waste, then reuse and recycle materials, compost, recover energy, and finally, dispose of waste in landfills.

Diverting waste from the landfill is key. The plan notes that the landfill accepted more than 180,000 tons of waste per year over the past two years. In 2017 and 2018, about 33% of the county's waste was diverted from the landfill. That's less than the recovery goal of 45% by 2025 that the state set for Deschutes County—a target meant to protect the environment through reducing waste disposed in landfills and reducing the impacts of greenhouse gas emissions that landfills generate. But most communities in Oregon and the nation during that time period saw reduced recycling because of a downturn in markets for recovered materials, the plan noted.

A new landfill is also key. The county's population grew by almost 15% from 2010 to 2016—and over the past three years, the amount of waste disposed at Knott Landfill has increased at a rate of 11% per year, according to the plan. With continued growth expected—possibly 230,000 people by 2030—the plan emphasizes a need to get a new disposal site permitted and ready to use when Knott Landfill closes.

The plan recommends siting and building a new landfill in the county—rather than transporting waste to regional landfills near the Columbia Gorge—through a formal process to begin by 2021. It offers a set of recommendations meant to reduce landfill waste by as much as 15% over the next 15 years, meeting or exceeding the state's 45% target when combined with current programs.

Among other ideas, the plan recommends expanding existing transfer stations; moving toward a standard waste reduction and reuse program through the county for homes and businesses; considering universal service for vegetative food waste collection; and studying the waste stream to better understand its composition and better evaluate and design options. For instance, a study could help address ways to handle the wood, roofing and other materials from construction and demolition activities that generate about 25% of the waste at the landfill. Other recommendations include recovering food waste—and evaluating ways to enhance composting facilities; developing plans to improve transfer stations; and setting up a capital improvement program to invest in transfer station changes over the next decade.

The plan notes that it only outlines a strategy to meet the county's and cities' goals—and that various actions, decisions and details, along with public involvement, would need to occur over the next decade on the various topics.

County commissioners have mostly praised the plan, although Commissioner Anthony DeBone has repeatedly suggested including the issue of the private sector's role in the waste system and the possible future options for the private sector. The draft plan does so with an appendix.

But a few of the plan's ideas have prompted concerns from board chair Phil Henderson. 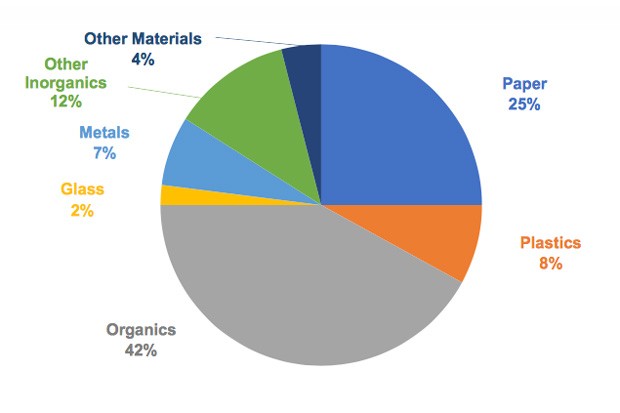 "I don't know that it's our goal to re-direct behavior," Henderson said.

Plus, a lot of construction takes place in the region and that sector may need more attention, he added. He called for more discussion before voting.

After the meeting, Henderson praised the committee's efforts—and the plan's take—on the analysis of various topics, including the landfill issue, saying that's mainly why the committee was created. But he questioned whether the many recommendations the plan lays out were in the scope of the process, or whether the committee members were vetted well enough from a public policy standpoint to address such issues as costs and behavior.

He also questioned setting goals for recycling when the future of that industry is more uncertain now than it was in the past. He doesn't doubt the effort, noting that he's the one in his family to do it.

"I'm a bottle and can returner on a regular basis," Henderson said.

But he wondered why construction waste didn't get more attention.

"We're kind of the poster child of a growing community," Henderson said. "We could be a leader in that area."

He noted that the plan has a lot he will sign off on, and the county has a system to be proud of. But reviewing the costs and benefits of the proposals is a part of ensuring fiscal responsibility.

But the plan's recommendations aren't meant to be set in stone, noted Cassie Lacy, Bend's sustainability coordinator, who took part in the committee to craft the plan.

“We know it’s growing,” she said of the region. “It benefits all of us to be proactive about that.”—Cassie Lacy tweet this

Lacy noted a similar process for the county waste plan and the city climate plan. The plans lay out high-level recommendations and guidance, without committing any entities to any specific actions. More detailed analysis and decisions would follow on each recommendation, and the recommended actions could change in response.

"You dive into each, one at a time," Lacy said, calling this stage of adopting the plans the beginning.

She also noted that the goals of reducing waste and preventing some of it in the first place align with state diversion rate goals and with the city's environmental and climate action plan efforts. Part of that effort seeks to reduce the amount of waste sent to the landfill, along with the total amount of waste—steps that help reduce greenhouse gas emissions. The city will likely consider adopting its community climate action plan this fall.

"The waste system in the county actually does work quite well," Lacy said, noting that it's already efficient and succeeds at serving a lot people—unlike some systems where processes like this identify big problems.

But there are challenges, including uncertainty around the recycling industry's future, Lacy noted. China stopped accepting recycled materials from much of the U.S. last year. That's where recycled materials from this area went. Now the U.S. needs to develop a better domestic market for those materials, Lacy noted. An added challenge for this region is the cost of transporting those materials to the coast to ship them to places that may want them.

Lacy praised the planning effort as a collaborative one that looks to find ways to optimize an already effective system—including making it easier for people to understand what to throw away or recycle. And it aims to ensure the system is set up to collect future waste efficiently, balancing costs and environmental considerations. 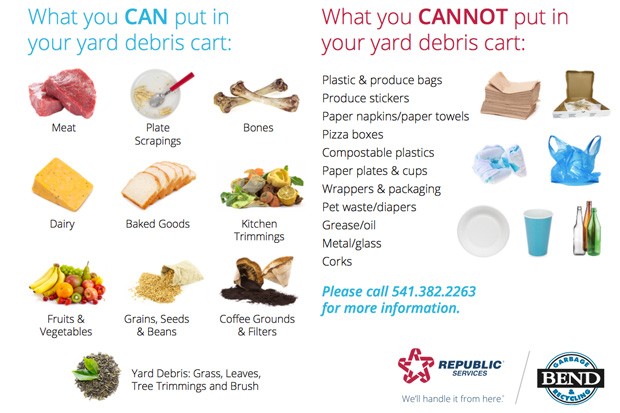 "We know it's growing," she said of the region. "It benefits all of us to be proactive about that."

To Mike Riley, executive director of The Environmental Center and a member of the county's solid waste advisory committee, a highlight of the plan is recovering more food waste.

Food waste can easily turn into compost, and the move takes some of the organic material out of the landfill where it can otherwise break down and create methane, a potent greenhouse gas, Riley noted. It can also make for nutrient-rich compost. A separate local effort, Project GreenBin in Bend, offers a $20-per-month service to collect food waste for compost on a local farm and for participants to use.

"The plan is a good framework," Riley said.