An exhaustive look at emissions and solid waste from cars

Transportation is on the mind of many Bendites this fall, as the City of Bend works through a new 20-year Transportation System Plan to keep people moving safely and efficiently over roads, bus routes and pathways. An estimated 40,000 people have moved to Bend since the previous plan was written, and most brought cars with them. 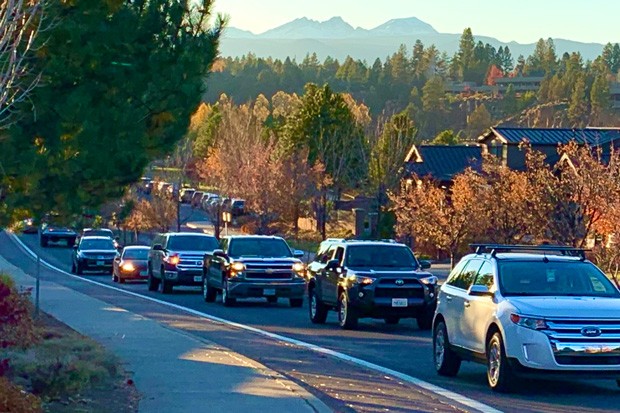 Nationwide, transportation contributes almost 30% of greenhouse gas emissions, according to the Environmental Protection Agency—and almost 60% of those emissions come from passenger cars and small trucks. The average car doses out 24 pounds of CO2 for every gallon of gas burned.

Reducing emissions is a stated goal of Bend's proposed transportation plan. Meeting that goal means factoring in safe routes for walking and bikes, transit options and even land use policy, explained Karen Swirsky, senior planner for the City of Bend. "Clustered neighborhoods are important. For example, a neighborhood grocery cuts down driving significantly," she said.

In the spirit of more sustainable transportation, this month's "Wasted in Bend" takes a look at waste generated by our primary mode of transport: the automobile. Autos create waste beyond the tailpipe emissions: every car owner eventually deals with threadbare tires, old batteries, engine fluids, and the metals and plastics that make up the car itself.

What happens to all of these worn out parts?

Americans dispose of more than 250 million tires from personal vehicles each year, according to the U.S. Tire Manufacturers Association. Until the 1990s, stockpiles of old tires attracted mosquitos and rats, caused smoldering fires and took up a lot of space. Better recycling technologies mean that today almost all tires are collected, stripped to separate Kevlar or steel bands and shredded into rubber granules.


Recyclers process the granules into fuel for industrial furnaces designed to trap toxic emissions. Granules can be added to asphalt or flooring. Rubber mulch has been sold for yards and playgrounds—though a 2015 study from Washington State University found that rubber mulch increases fire risks and leaches heavy metals and chemicals toxic to plants.

In Deschutes County, worn tires are accepted at Knott Landfill for a small fee. From the landfill, tires are sent to Prineville for shredding and processing.

The best way to keep tires out of the recycling bin is to extend their lifespan. Tire experts at Les Schwab suggest rotating tires every 5,000 miles, checking air pressure and tread monthly and keeping tires dry and covered when in storage. Purchasing used tires is a cost-effective and more sustainable option, as long as they're less than six years old with a safe tread depth. 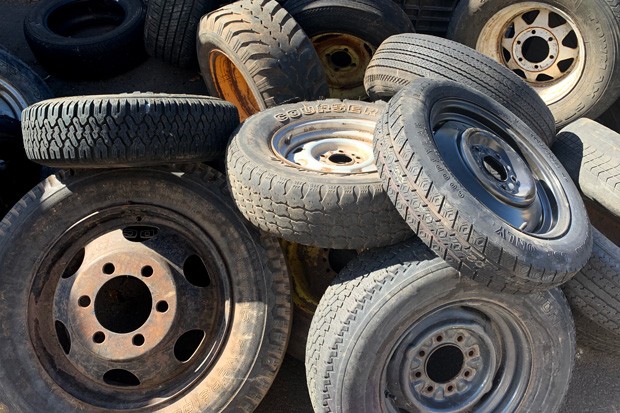 Most cars still rely on old-fashioned lead-acid batteries. Eventually the parts corrode and the power fades, but the lead and acid stay fully present—so both need to stay out of the landfill and the water supply.


Oregonians can bring used batteries to recycling stations like Knott Landfill, or can bring an old battery to the retailer when buying a new battery. The used batteries are returned to the manufacturer for recycling.

Recycling a battery involves separating out the plastic and metal parts, neutralizing the acid and removing the lead plates. Lead, like most metals, can be recycled over and over without degrading the quality. Almost all new car batteries sold today are made with recycled lead.

The EPA estimates that 200 million gallons of motor oil is dumped into rivers, onto soil or into landfills each year. Not only is that oil wasted when it could be reused, but the environmental impact is long lasting: just one pint of oil can slick over an entire acre of fresh water.

In Bend, used motor oil is accepted at the landfill recycling center. Plastic oil containers and metal oil filters must be disposed of in the trash, however. They're too contaminated to recycle.

No longer the final resting spot for wrecked or old cars, scrap yards now work to minimize auto waste. Fluids are drained and recycled, usable parts are removed and sold, and bodies crushed before separating the materials.


Industry standards state that 80% of scrapped cars are recycled, but that number reflects the weight recycled, not the volume. Cars today are up to 50% plastic by volume, and much of that still ends up in a landfill.

Driving less means lower emissions and less traffic, which brings a better quality of life for all of us.—Kim Curley tweet this

Options to shrink your carbon output

As the City's new transportation plan outlines, cars dominate the transportation world in Bend—but we can lessen dependence on them. The plan found at bendoregon.gov/city-projects offers key routes for biking and walking. Info on which bus routes might fit a local person's routines can be found at cascadeseasttransit.com.

Electric cars cut greenhouse gas emissions significantly, and Bend is working to install more charging stations. Cassie Lacy, senior management analyst for the City of Bend, stresses that electric cars come with a different set of environmental problems. "We're trying to align the TSP with Bend's Climate Action Plan, and supporting electric cars is part of that, but we need to do it right," she said.

Wasted in Bend is a monthly series examining the waste stream in Bend.