Wasted in Bend: Bagging the Bombs

The dirty secret of a dog-friendly town

Spend time at any dog park in Bend and you'll soon experience the dirty secret of this dog-friendly community: People don't pick up after their pups. It's not just a Bend problem: A study by the Center for Watershed Protection found that 40% of Americans admit to not scooping the poop. 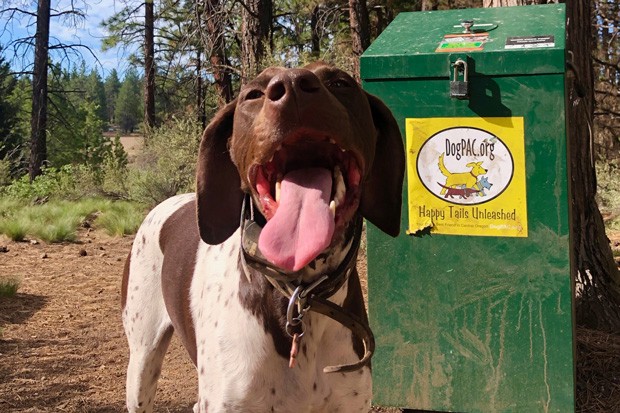 Just how much poop is there? An estimated 15,000 dogs live in Bend (four out of 10 American households own a dog, according to the Humane Society.) The average dog creates 150 pounds of waste annually, which adds up to 1,125 tons landing on streets, yards, parks and trails. If not picked up, it washes into sewers and waterways, gets tracked inside on shoes and can be eaten by other dogs (fun fact: the name for habitual poop-eating is coprophagia, which may indicate an undernourished dog.)

The down and dirty on dog doo

Dog feces, like human waste, contains a stew of pathogens including Giardia, Salmonella, Campylobacter, tapeworms and roundworms—all of which can cause serious illness in humans.

Wild animals poop in the woods every day, but dogs are different because humans feed them nutritionally rich food containing extra nitrogen and phosphorus. If allowed to wash into rivers and streams, it acts like fertilizer for algae blooms. In fact, the Environmental Protection Agency lists pet waste among the major nonpoint sources of water pollution from runoff, along with motor oil and pesticides.

The Environmental Protection Agency lists pet waste among the major nonpoint sources of water pollution from runoff, along with motor oil and pesticides. tweet this

There's no perfect way to manage dog poop, but some ways are better than others. Dog waste is difficult to compost, because killing pathogens requires extreme heat. It's not accepted in yard debris collected for compost at the Deschutes Landfill, where the composting process is meant for plant material only.

The Environmental Protection Agency recommends flushing dog poop down the toilet, avoiding plastic bags altogether. Tim Truax, Supervisor at the Bend Wastewater Plant, confirmed that Bend's state-of-the-art water treatment system handles dog waste just like human waste, but he wouldn't recommend flushing. "A bigger concern would be using all that extra water for flushing. It's better off in the landfill," he said. Flushing dog poop is a definite no for any home with a septic tank off the sewer system.

And then there are the bags. Wrapping tons of poop in plastic for the landfill seems counter-intuitive, as we work to reduce disposable, single-use plastics, but it just may be the best option.

Bend Park and Recreation District provides dog poop bags and waste cans at most parks. They donate bags to DogPAC.org, a local organization that works to improve off-leash recreation on public lands. DogPAC maintains bag dispensers and waste cans at Phil's Trailhead, at Good Dog! Park and Wanoga Sno-Park. The cans are emptied by The Bomb squad, a local business that provides this service. Between the nine cans at Good Dog, and two cans at Phil's, they haul out an average of 350 pounds of dog poop each week. 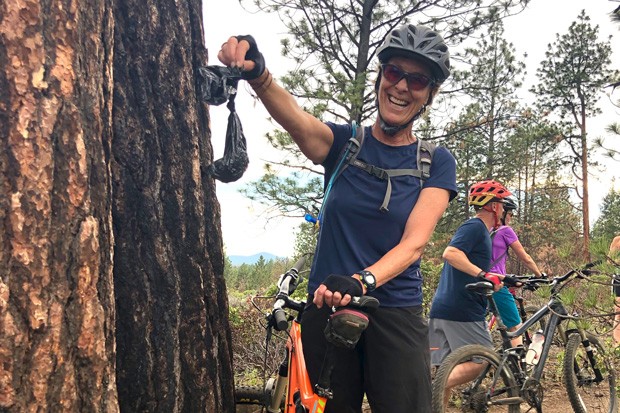 These bags are labeled as biodegradable, meaning that under the right conditions they break down into CO2, water and smaller inorganic molecules. The process requires oxygen, water, heat and the right bacteria in order to biodegrade. But perfect conditions don't always happen in the landfill, so poop bags may stay intact once buried. Biodegradable does not mean compostable—no organic matter is created when they degrade.

A biodegradable plastic bag that can't break down just adds to the plastic problem, according to Ani Kasch, Project Manager at the Environmental Center's ReThink Waste program. "Reuse a plastic bag you already have before taking a new poop bag at the trailhead," she recommended. "Bread bags, for example. They can serve a second purpose before we throw them out."

Won't dog poop just dry out and decompose in nature? Sometimes that works, according to Jean Nelson-Dean at the Deschutes National Forest. "We just ask people to use common sense," she explained. On high traffic trails, or anywhere near water, bag it and toss it. In low-traffic areas far from rivers or creeks and off the path, it can be buried and left to decompose. No dogs are allowed on trails within the Bend watershed, where much of Bend's drinking water originates.


Nelson-Dean stressed the need to not just bag it, but to actually carry the poop bag to a trash bin. "There are no poop fairies to pick up bags left behind on trails. You have to actually carry your dog's poop to the trash yourself."

DogPAC and Forest Service workers both mentioned that dogs are not the only problem poopers on our trails – human waste is not an uncommon sight. It also should be bagged and tossed, or buried far from any waterway.

Wasted in Bend is a regular series examining the waste stream in Bend.