Wasted in Bend: Clothing in the Landfill

A growing movement to repair and reuse textiles

Last month I resolved to clean out my closet—hitting a snag when I pulled out a well-worn puffy coat with a broken zipper. Was it too shabby to donate? What were my options beyond tossing it in the trash? 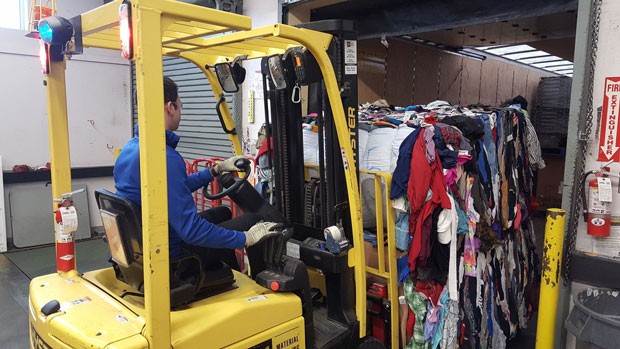 These questions become more common with the advent of fast-fashion clothing—a disposable commodity. Americans buy twice as many pieces of clothing annually than 20 years ago, but keep them half as long, according to Greenpeace research.

Wear it out or toss it out?

Americans discard 16 million tons of textiles every year. That's 80 pounds of clothing, bedding, tents and bags, per person. Some comes from stores tossing unsold inventory. The Environmental Protection Agency calculates that 85 percent of unwanted textiles end up in a landfill, while 15 percent is reused or recycled.

Once fabrics arrive in a landfill, decomposition depends on the fiber, and on landfill conditions. Natural fibers such as cotton, bamboo, wool and silk break down within a few years, while synthetic polyesters remain intact for up to 200 years.

In Oregon, Department of Environmental Quality statistics show that textiles create over 3 percent of our waste stream—half the national average. That doesn't necessarily mean Oregonians throw away less clothing, says Timm Schimke, director of solid waste in Deschutes County. "We tend to have a lot of construction waste here, which skews the percentages," he explained.

Knott Landfill, the only landfill in Deschutes County, is projected to close in 2029, and reducing the waste stream is critical to stretching its lifespan. The newest Solid Waste Management Plan (its acronym, SWMP, is pronounced swamp) raises the recycling goal for the county to 45 percent of collected solid waste. Textile recycling is not yet part of the County's waste diversion plan.

From Clothing to Rags

The simplest way to keep clothing out of landfills is through a thrift shop, but not all donations will end up in a new closet. Most thrift shops keep donations on the floor for several weeks, then bundle unsold clothing into bales for textile salvage buyers.

Salvage bales may be shipped overseas, but the massive volume of used clothing is causing foreign demand to plummet. Other bales are used to create recycled cleaning rags, a growing market niche. The least-desirable salvage is shredded for use as recycled fiber.

Dale Emanuel, public relations manager for the Columbia Willamette branch of Goodwill Industries, notes that Central Oregon donors are among the most generous in the country. Each week, more than 220,000 pounds of donations arrive in local stores, most of it clothing. Every week, 15,000 pounds leave the stores in salvage bales.

"We do everything we can to keep donated goods out of the landfill," said Emanuel. "Donation sales fund our Job Connection, which helped over 800 community members last year." About 5 percent of donations arrive too dirty for salvage, so the organization pays landfill fees to dispose of them.

At the Opportunity Foundation Thrift Stores in Bend and Redmond, Director Seth Johnson reinforces Emanuel's sentiment. "Sorting donations is valuable job training for our employees," he noted, "and almost everything can be reused or recycled." In 2018, their thrift stores diverted 275,120 pounds of clothing from the landfill.

The Business of Reuse and Recycle

Patagonia has its Worn Wear program, taking back gently used items in return for credit toward new or used items. All new Patagonia items are fully recyclable.

Rod Bien, owner of Patagonia in Bend, estimates people bring about 100 used items per month to the downtown Bend store. "We're working to create a culture where customers choose carefully, and keep garments for a long time," said Bien.

"The repair economy is coming," she stated. "People are learning what resources go into making garments, all the water and chemicals, and those get thrown away, too."

So, what to do with my shabby puffy? Fix that zipper, or wash it before donating for salvage or recycling? In either case, it won't go into the trash.

—Wasted in Bend is a monthly series examining waste streams in Central Oregon.