The movement to manage potentially toxic e-waste is growing

What's in your junk drawer of outdated gadgets? Mine holds a digital camera, two iPod nanos and a shuffle, a broken portable DVD player and dozens of chargers. Piles of electronic waste keep growing, even as devices get smaller and faster. But the movement to manage e-waste is growing, too. 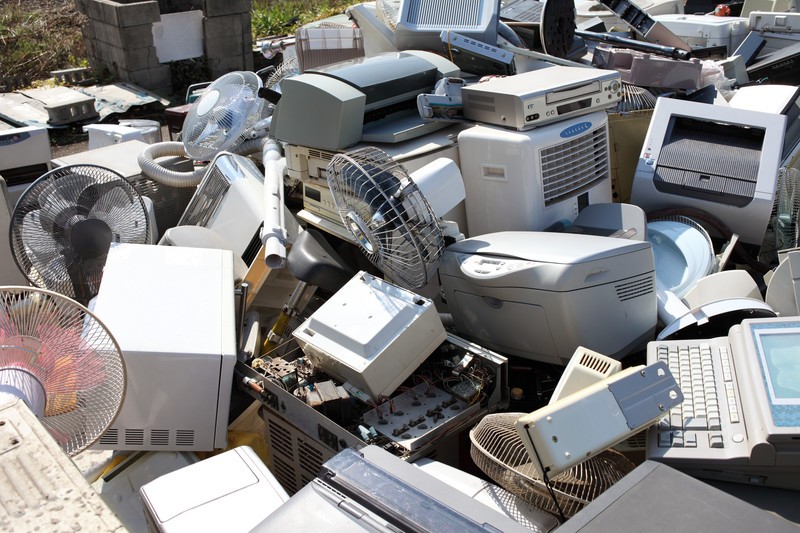 The worry about e-waste

Producing electronic devices requires a mix of hazardous metals: lead, mercury, cadmium, plus a host of chemicals such as lithium oxides and flame retardants in batteries. When disposed of improperly, they can create a toxic soup harmful to soil, water and people.

Many metals used in electronics are valuable, including gold, silver, copper, and rare earth metals (surprisingly abundant, but difficult to extract and refine.) Tossing a circuit board in the trash means burying a tiny bit of treasure, and those tiny bits add up. The Environmental Protection Agency estimates that recycling 1 million smartphones would recover 75 pounds of gold, 772 pounds of silver, and over 17 tons of copper. Yet Americans discard millions of phones each year.

While the EPA strongly encourages e-waste recycling, only cathode ray tubes from older televisions are federally regulated. Congress has discussed but failed to pass regulations on shipping toxic e-waste to developing countries. One driving force in monitoring and exposing such hazards is the Basel Action Network. The Seattle-based organization grew from the 1989 United Nations Basel Convention on environmental justice. BAN has defined standards for recycling and has sleuthed out companies that continue to bypass these standards—including some in Oregon.

In 2007, just as LCD flat screens became affordable and rear-projection televisions were filling landfills, Oregon passed its Electronics Recycling Law. This law banned televisions, computers, and LCD screens from landfills, and required manufacturers to recycle their products, or pay to support the Oregon E-Cycles program.

Oregon E-Cycles provides free e-waste recycling to consumers, who can drop unwanted electronics at collection points statewide. The e-waste is processed by certified recycling services in Portland, and often sold overseas for dismantling and recovery of materials—yet certification does not guarantee the recycling is done safely or sustainably.

Total Reclaim Inc., a recycling business working with Oregon E-Cycles, paid the state of Oregon $553,750 in February to settle a Department of Environmental Quality violation. Working with BAN, the state found that TRI had shipped millions of pounds of potentially toxic e-waste to unregulated facilities in Hong Kong.

URT Solutions, based in Clackamas, currently collects and processes e-waste from Central Oregon for the Oregon E-Cycles program. URT Solutions has been certified by BAN to meet their e-stewards standards for safe and sustainable recycling sites, both in the U.S. and abroad.

Repair on the rise

Perhaps more ideal than recycling electronics is keeping gadgets in working order, extending their usability. In the case of smartphones, mining metals, producing batteries and powering factories does far more environmental damage than actual cellphone use. The longer the lifespan of each device, the smaller the impact.

This spring, Oregon joined 17 other states in considering a Right to Repair bill, which would make it easier to fix electronics. HB2688 would require manufacturers to allow access to service manuals or tools to repair digital equipment such as phones and tablets, and larger equipment such as appliances and tractors.

Nicholas Baumann, owner of The iPhone Guy in Bend, offers a local option for smartphone repair. He fixes dozens of smartphones and tablets daily, mostly replacing screens and batteries. Baumann also accepts unusable devices and can sometimes offer cash back.

"A lot of old phones still have value. You just have to know the market," he explained. After dismantling the phones into parts—cameras, batteries, screens and backings—he finds businesses or organizations for each component. "Almost every part of a smartphone can be re-used in some way," said Baumann.

Closing the loop on e-waste

Recycling and repair might never prevent all e-waste—but a growing shift at the corporate level, toward closed-loop production models, could help. Apple and Dell are both moving toward circular supply chains, where finished products turn into raw materials for new products. Apple's new robot, Daisy, efficiently removes and separates metals from old devices. Dell uses the plastics from old computers to make new ones. Both companies take back their products for recycling.

—Wasted in Bend is a regular series examining waste streams in Central Oregon.