Plastic, aluminum or glass? When it comes to what's better to use, there's one clear winner—and it's none of the above.

What do carpets, tennis balls, and fleece jackets have in common?

They all give plastic water and soda bottles a second life. 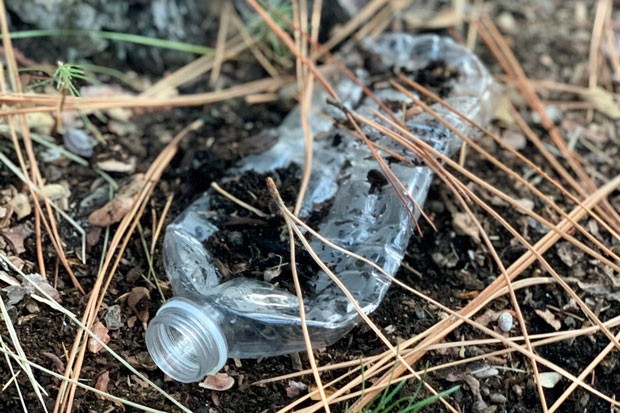 Disposable drink bottles, made from polyethylene terephthalate, or PET, can be recycled into many different products. PET bottles make an easy target for critics of a wasteful society, but they're as useful as they are reviled. They're a safe source of clean drinking water, yet they clog landfills and beaches. Their lightweight composition makes transportation easy, yet they contribute to fossil fuel dependence. They're easy to recycle, yet difficult to clean and reuse. In short, our relationship with single-use PET bottles is complicated.

How did we get here?

PET is the wonder child of the polyester family. It's strong, shatterproof and inert. DuPont trademarked PET as a food-grade container in 1973, and the plastic tsunami has been rising since. By 2017, an estimated 1 million single-use PET bottles were purchased worldwide every minute, and fewer than half are recycled, according to market analyst Euromonitor International. The cost has exploded, too: bottled water adds up to over $7 a gallon—almost twice the price of gasoline.

In Oregon, over 80% of PET bottles go to recycling – double the national average. Much of that success is credited to the Oregon Bottle Bill, which requires a 10-cent refundable deposit on all beverage bottles and cans. In Central Oregon, deposits are refunded at most grocery stores and at Bottle Drop stations. Last year, 13.4 million pounds of PET bottles were recaptured state-wide for recycling, as well as 21.3 million pounds of aluminum cans and 104 million pounds of glass bottles.

“I’m a big fan of Bend water, both as a citizen and as part of Bend’s water department. I’d choose a refillable water bottle over disposable whenever possible.”—Drexell Barnes tweet this

Bottled water is regulated by the Food and Drug Administration, while municipal tap water falls under the jurisdiction of the Environmental Protection Agency. The FDA requires bottlers to identify their water source, which may be untreated spring water, with or without added minerals, or may be plain old tap water. Tap water, on the other hand, has to pass stricter EPA testing for bacteria, parasites and contaminants like asbestos.

The newest addition to water quality concerns are tiny bits of PET and HDPE (the plastic used to make bottle closures) known as microplastics. Multiple studies find a greater concentration of microplastics in bottled water than in tap water, but results vary by geography and brand. The World Health Organization has flagged microplastics as a potential health problem, yet they take a backseat to water-borne diseases including cholera and Hepatitis A—and plastic bottles can help fight that battle.

Drexell Barnes, environmental compliance manager at the City of Bend water department, stated that they are following the research on microplastics. "We have a pristine water source upstream of potential contamination sources, so I wouldn't expect a microplastics problem, but it's an emerging topic and it's on our radar," he stated. He added, "I'm a big fan of Bend water, both as a citizen and as part of Bend's water department. I'd choose a refillable water bottle over disposable whenever possible."

Aren't cans and glass better environmental choices than plastic? All three have pros and cons, and there's no clear environmental winner in terms of production and transportation. PET bottles are petroleum based, but use only .5% of the oil we drill, according to the PET Resin Association. Aluminum cans come from strip-mining bauxite ore in Australia, South America and Africa, a process that damages local ecosystems. Glass starts with sand from limestone quarries, which have less environmental impact—but the carbon footprint from shipping heavy bottles is far greater.

Like aluminum and glass, PET can be repeatedly recycled—but is rarely made into new drink bottles. Once collected, post-consumer bottles are sent to a material recovery facility to be sorted, bundled and sold to polymer recyclers. The bottles are processed into small beads, then extruded into a fiber to create new products, like tennis balls. Making recycled PET clean enough to create new bottles has been difficult until recently.

Earth2o, a water bottling company in Culver, Oregon, is an exception. The company uses food-grade recycled PET resin to make recycled and recyclable bottles at its facility.

Larger beverage companies are shifting toward sustainable bottling, too, through the "Every Bottle Back" campaign. PepsiCo, Keurig and Coca-Cola have joined forces to invest in community collection and recycling services, especially where disposable bottles are more commonly used, such as at festivals, parks and airports.

In the drink container debate, there's really one clear winner: Refilling a reusable container wins the sustainability award over any single-use bottle.